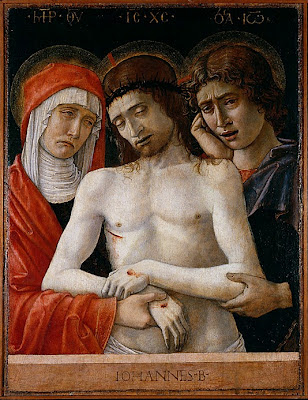 The Metropolitan is hosting a small but select exhibition called "Bellini, Titian, as Lotto," with renaissance paintings on loan from the Accedemia Carrera, in Bergamo, Italy.  Spanning a hundred years, these works show off the talents of the two most celebrated members of the Venetian school, Giovanni Bellini and Titian.  But even more interesting, perhaps, are the works by Lorenzo Lotto, and other figures from the region who are less well known to many museum goers.

Admittedly, the Bellini Pieta is the star of the show.  It shows off what I love most about the artist, his poetic, and, in this case, tragic sense of stillness.  Transitioning from Quatracento mediaevalism, Bellini's figures tend to be centrally placed (his St. Francis, at the Frick, is a notable exception).  Here we see heraldic symmetry, with Christ flanked by Mary and St. John.  John's face echoes the dead Christ, but  his knitted brow creates as striking contrast.  This is a magnificent work.

The Titian, by comparison, is pedestrian, and its attribution to the master is not even firmly established.  It shows the work of an immature artist, and is noteworthy mostly for three features.  First, we see the characteristic naturalism.  Drawing on Giorginoni, Titian has a gift for outdoor scenes.  We also see a painterly quality here that anticipates his later work.  Finally, it has the feel of a 19th century Romanic painting, which gives is it some interest and intrigue. 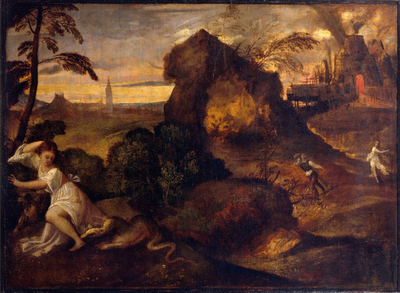 More exciting are the canvases by Giambattista Moroni, a superb high renaissance portraitist.  Though not quite in the league of mannerist Bronzino, it is a great oversight that Moroni is not better known.  His  realism imparts a kind of humanity that is rarely seen in religious subjects from the period.  The first image below comes from the Met show, and two others are added from Wiki for good measure. 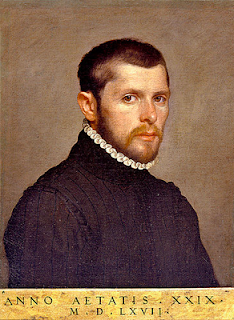 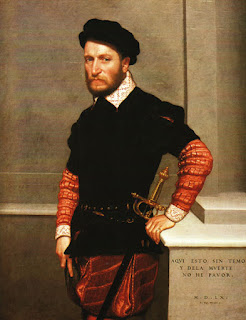 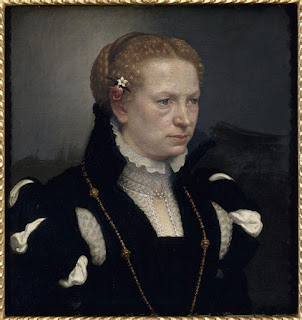 For me, however, the greatest revelation was Lotto.  The paintings here are wonderfully dynamic, the opposite of the mournful Bellini.  And Lotto shines too as a colorist.  We even see him using saturation in lieu of shadow, as became the mannerist vogue.  Most affecting is his Stoning of St. Stephen.  Here the fallen saint begs for mercy in the middle of a road.  On the right, four men cast stones with dramatic sweeps.  On the left, we see two others turning towards each other as if whispering about the event.  They hold fierce weapons but do not intervene.  Thus, in this striking contrast of postures, we see an essay on two kinds of evil: crimes of commission and crimes of ommission.  All this, on a tilting landscape with subtly rendered and symbolically poignant architectural ruins.  Though small, the show deserves attention for this painting alone. 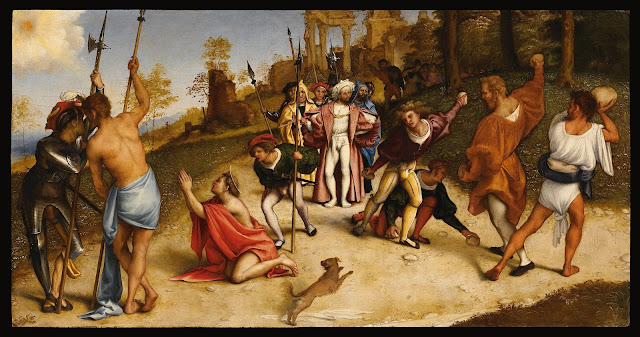