Absent an audience, a stage actor can’t truly bring her performance to fruition.  Not so for the visual artist whose self-contained work can be both complete and achieve greatness.  That’s the theory of course, because if they are to be heard, most artists do need an audience.  The collector plays a special role here, one that dates back to early times.  Some collectors simply accumulate long finished work but some become patrons purchasing and sometimes commissioning new creations directly from the artist.  Beyond the “applause” most of us need, collector-patrons often provide the material sustenance that enables the artist to go on.

Collectors may hold on to their treasure trove, but many donate or bequeath works to museums.  Hardly a museum exists anywhere in the world that isn’t built around, or strengthened by, works amassed by collectors.  In that sense, they haven’t only been collecting for themselves, but also for us.  The Nasher Museum at Duke University is named for such collectors and its newly opened exhibit, Time Capsule, celebrates the collecting of another, if not collecting itself.

Jason Rubell got his collecting start at age 13 with a bar mitzvah gift from family friend and onetime street artist Keith Haring.  Jason was on his way and never stopped.  By his senior year at Duke, he had accumulated enough works to mount a credible exhibition, his senior project.  Shown in 1991 at Duke’s then museum, it traveled on to ten other universities.  Today, Jason Rubell collects with his family and together they have amassed one of the world’s great private art collections, much of it exhibited at the Miami’s Rubell Family Collection.  Recently Jason’s debut exhibition was reprised there.  It has now returned to Duke where it started, filling two gallery rooms with works by the likes of Eric Fischl, Jeff Koons, Bruce Nauman, Gerhard Richter and Cindy Sherman.

It’s appropriate to start at the beginning: Keith Haring’s vibrant untitled work that Rubell describes as a “transition” between his subway and later works.  Haring’s self-described mission was to communicate “immediately and clearly,” and this smallish piece incorporates some of the iconic line drawn figures that became a trademark.  The narrow paint strokes of blue, yellow and green contrast from what is essentially a black on red acrylic that echoes the chalk drawings with which he launched his relatively brief career.

German artist Katarina Fritsch’s five small objects (exhibited in a box) are the product of her dreams combined with the reality of what they depict.  She calls it translating the perfect objects in her mind into an imperfect world.  In fact, each is painstakingly crafted--prototypes of multiples that will never be duplicated. 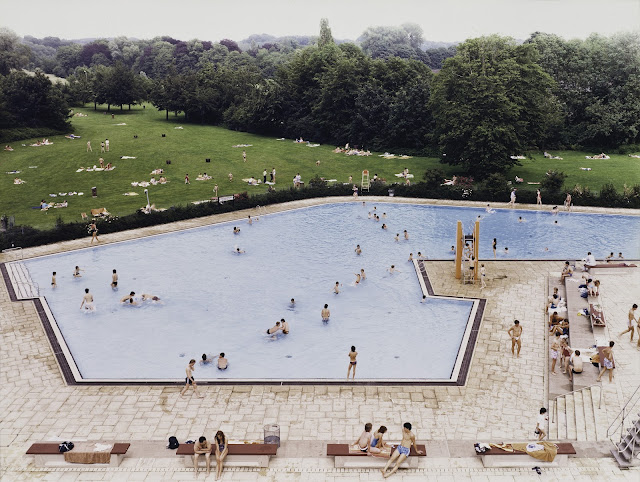 Another German, photographer Andreas Gursky, is represented by Ratingen Schwimmbad (swimming pool).  Capturing a large pool and surrounding greens, the photo is taken from a great distance.  The result is an image of miniaturized figures in and out of the water.  They look almost more drawn than captured by camera.  While totally different in tone and content (and far less crowded), it brings to mind Hieronymus Bosch’s Garden of Earthly Delights, a canvas so chocked full with individual figures that one is bound to discover something new at every viewing.

Images from the collection of Jason Rubell are at the courtesy of the Nasher Museum of Art at Duke University
Posted by Jonathan J. Prinz