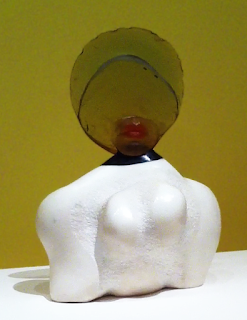 On the Janson/Gardner telling of art history, the Edenic epicenter of art since the Second World War has been America, and occasionally Western Europe.  Eastern Europe, sealed off behind the iron curtain and working under the dictates of socialist realism, was not producing anything worthwhile.  That version of the story is wrong.  For example, any student of cinema knows that there were great films being produced in Soviet States.  In the 1960s, Czechoslovakia, Hungary, and Poland produced some of the finest directors in the history of film (e.g., Chytilová, Jancso, and Wajda).  There was also a thriving underground art scene.  I was enlightened on this topic two years ago, when the Pompidou had a show called Promises of the Past, which profiled talented artists from the East.  Among the most compelling was Alina Szapocznikow (pronounced Sha-poch-nyi-kof).  Shortly after that show, I was able to see some of Szapocznikow's work in Krakow, and then at the Hammer museum in Los Angeles.  The Hammer show is now at MoMA and closing at the end of January.  Go. 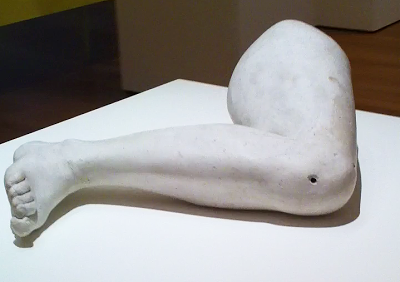 Szapocznikow was born in Poland and spent her teen years in concentration camps (Bergen-Belsen, Theresienstadt, and Auschwitz).  Shen later died, at 47, of breast cancer.  In between, working in both Poland and Paris, Szapocznikow produced a remarkable body of work.  The phrase "body of work" has rarely been more part, since the artist's entire output can be described and a an interrogation of the body. Bodies and body parts are cast, stretched, illuminated, engulfed, excised, and flayed. 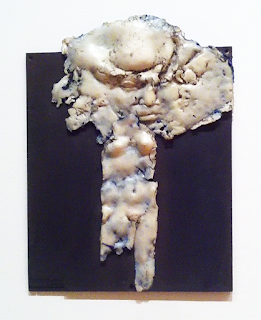 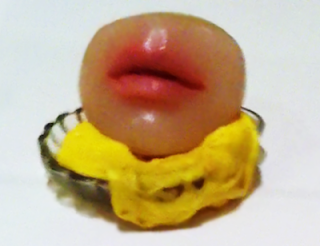 We find piles of amputated breasts, evoking St. Agatha, a flattened casting of the artists face, evoking Michelangelo's flayed self-portaint his Last Judgment, and lips turned into lamps, which present as mod chic, while chillingly evoking Nazi lampshades made of human flesh.  These pieces are all irresistibly aesthetic, but also unsettling.  We rarely see a body intact here, and there is always a sense of violence behind the beauty.

One of the most moving pieces in the show is a group of human heads that have been transformed into round tumor-like forms and strewn across the floor.  By this time, Szapocznikow was aware of the tumors that were killing her, and her she regains power by turning her illness into art. 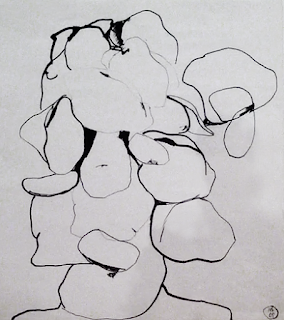 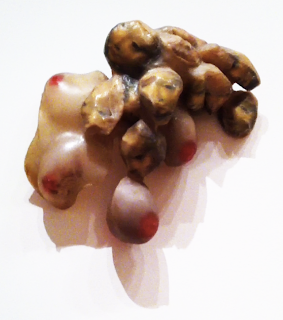 Szapocznikow is a master of multiple media.  She works in plaster, metal, stone, glass, and resin.  We also find exceptional works on paper--tangled, organic networks of lines, which, though casual, hold up to her best sculptures.  There are also mixed media works, that integrate photographic materials, including the image of a female holocaust victim, into resin encasings.

More inventively, we find a series of gum photos: chewed bits stuck to variously textured surfaces, or dripping off edges.  These, too, are about the body.  We see the artist's teeth marks in the gum, and each little wad looks like a body in its own right.  Impermanent, agonized, and teetering, they comment on the human condition, filtered (or masticated) through Szapocznikow's existential wit.  One wonders whether these gum photos influence Hannah Wilke's self portraits with gum. 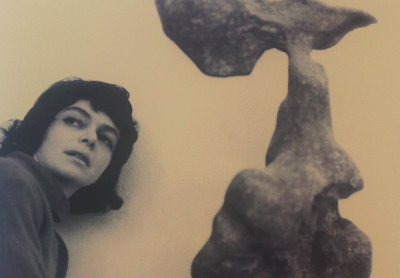 The possible influence on Wilke, the use of tortured female forms, and the unflinching dedication to art-making in a male dominated world make Szapocznikow qualify as an important figure in feminist art.  But this classification distracts from her resolute humanism.  Szapocznikow experienced two brutal political regimes first-hand, and also bore witness to injustice in the West while living in France.  In addition, she learned the fragility of the body, through both tuberculosis and the cancer that took her life.  Thus, it was no just as a woman that she knew about vulnerability--it was a Jew, as a political subject, and as a living organism.  The work references that vulnerability again and again, but it embodies indomitable strength.

Every once in a blue moon, or a lunar eclipse, we stare in the face of a brilliant artwork.  I suspect there is a spectrum of scientific explanations for why certain images, colors and themes are preferable.  But it is my gut that speaks when I look into the veiny ominous eyes of a Trenton Doyle Hancock painting, with a knowing smile, and I declare internally: He’s got it. He gets it.  This is fucking genius. Yes, amazeballz.  Axons fire, thoughts wander, and I slip onto folding ribbons of text that unravel into messages like: “If You're Too Fat, You Should Buy Clothes That Fit”, or “All Things Known and Nothing to Own”.
Trenton has a comic book style, but the superheroes are more Rat Fink than Batman.  Self-portraits are cobbled together with mythological beasts, part human, part animal that stand in the midst of delightful and creepy floating brains that rain colored tears, enraptured by trees with tenticular roots.  Trenton’s works are simultaneously whimsical and incredibly thought out.  The contrast of black and white interspersed with bright colors, and the collaging of his canvas with pieces of painted canvas creates a depth and tactile-ness that draws you into a land of make believe. If I were to speculate, which I always do, I would guess that fact and fiction have been woven from his personal yarn.
His solo show, "And Then It All Came Back to Me", at James Cohan Gallery in Chelsea closes after tomorrow. For all you New Yorkers not sequestered on exotic islands or undisclosed locations, for the those you not in an egg nog infused state, I implore you to race before Saturday’s end to see the fabulousness that is Trenton Doyle Hancock.  If you are disappointed, I suspect you thought my glowing review entailed the arrival of a gold coin dispensing leprechaun.  But you will most certainly be charmed by his wit, humor and whimsical paintings, because they are truly, magically delicious.

Till Death Do Us Part?

Traveling by plane used to be the part of the adventure of getting from point A to point B where one could sort of recalibrate: kick up your feet, have a cocktail, eat a decent square of lasagna with a dinner roll, wash it down with some cab, maybe watch a movie, and then snooze.   Shit, I though flying was fun.
On a recent trip, I ended up with bulkhead seats.  It felt pretty luxurious not to feel the seats in front of me, no dome of a fellow passenger’s head within stroking distance.  The cabin was noticeably hot; the steward, of whose seat was directly opposite, fanned himself, with a faint “glow” on his brow.  Small talk led to a causal mention of his mother’s passing ten years prior.  That little conversational kernel laid the foundation for an oral account of his book about his Mamma.  “Mira,” he said, “I don’t know why I feel so comfortable telling you all this.” I don’t know either, but I have a way of welcoming these conversations. I’d like to say it was a freak occurrence, but it’s practically the norm.
Gabriel, the steward, gave a day-by-day blow of “the final 21 days.”   The diagnosis: leukemia. Blood tests, the shock and disbelief of the doctors that his mother could still be standing, the tear that rolled down her cheek as he spoke to her in a coma, and the sister who opted to spend the final days somewhere else. There was a phone call to his former girlfriend who was in the mortuary business, whose morbid magnificence had been requested by mother. No detail would be missed: the outfit, the make-up, and, of course, making sure her “titties were pushed up high”.  When his mother finally passed, Gabriel insisted upon being present for the preparation of the casket viewing.  He described holding his mother’s head to keep it from bobbling while the blood was drained from her body.  For him, it was deeply moving. His childhood sweetheart spent hours on her make up.  And then, as if on cue, he plucked out an envelope filled with photographs from his satchel, among which was an image of his mother in her casket, perfectly posed and looking her best.  Really, he felt so proud of her, and proud of himself too, for the dignity she had and for his part in helping her to maintain it post mortem.
The ritual of preparing the newly deceased for an “existence” post life is both incredibly touching, and quite fascinating.  Neither of my paternal grandparents had a ceremonial burial.   There was a memorial, a gathering of old friends, immediate and extended families, where dots were connected with lofty tales.  When my mother’s father died, she chose not to look in his casket, because she wanted to remember him as he was when last they had been together.  Death is the unavoidable rite of passage, and how we choose to release the body is a task for the living.   For some, it is has a religious base, but ultimately, it’s about paying tribute to the deceased.  It was this remarkable and most unexpected conversation with a steward that made me think of the masters of casket making in Ghana, West Africa, of whose whimsical creations are an inspiration. Their modern day sarcophagi, like those of ancient Egypt, reveal the status and identity of its inhabitant. It is also part of their tradition to garnish the casket with offerings for a rich afterlife. 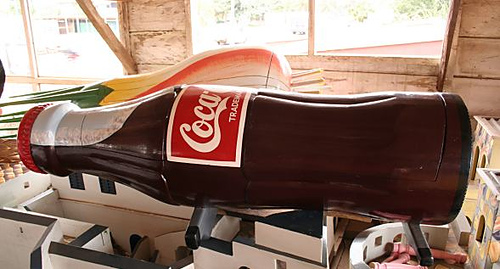 For the Ga people of Accra in Ghana, life continues after death. Ancestors carry powers that influence the lives of those the deceased leave behind and can offer prosperity.  While the funeral is approached as an investment, it is almost always celebratory.  Tears of sadness and joy intermingle naturally.  Sending off the deceased in a dignified manner has, since the 50’s, come to include an artisanal casket designed to match their profession, or another telling trait, like a love for alcohol or cigarettes.  Caskets are carved as: a bottle of beer for the beer lover, a fish for the fisherman, a Mercedes for a driver. No expense is spared. 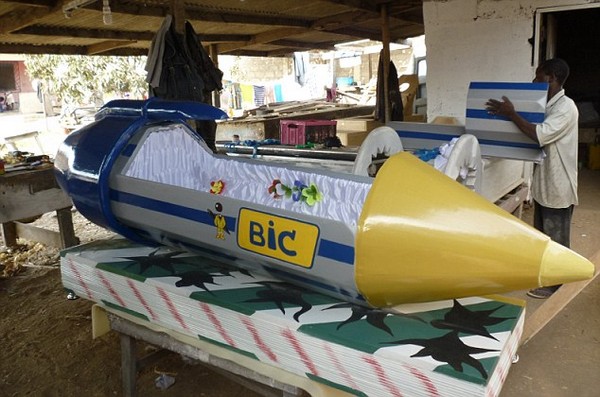 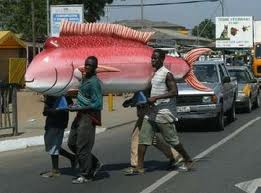 The first known masters of  “fantasy coffins” were Kane Kwei (1922-1992), and his assistant Paa Joe (born 1947).  Kwei left his life on cocoa plantations with hopes of pursuing a career in construction.  At the same time, a fisherman and prominent family member passed away. To honor him, it has been claimed that Kwei built a casket in the shape of a fish. And here a tradition was set into place. It may cost a family a year’s salary to commission a casket, but it is treated as a required homage and a way of securing a family’s status.
Each culture has a unique was of honoring the dead. While I myself do not believe in life after death, I suspect I am not alone in the hope that I won’t soon be forgotten.  Better yet, I would like to be remembered in a positive light. Wouldn’t you?