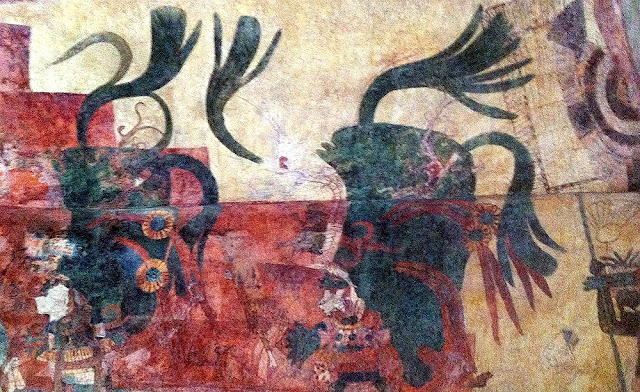 For many tourists from the U.S., Mexico is associated with great food, glorious beaches, and melodic mariachi bands.  Less adequately appreciated is the fact the Mexico boasts some of the most extraordinary archeological treasures in the world.  The great Mesoamerican civilizations that thrived there left many stone sculptures, wall reliefs, and architectural monuments behind, including the most impressive pyramids outside of Egypt.  They also produced painting.  Though highly vulnerable to the ravages of time, some of these paintings survive, in various states of disrepair.  The most impressive are the wall murals of Bonampak.  On a recent trip, I was lucky to see these first hand, and I can say that no encounter with art has been more thrilling. 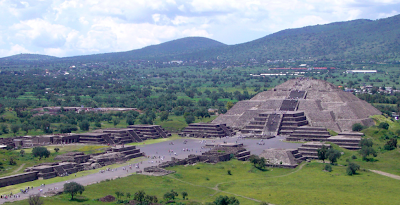 Mexico's pyramids do attract some tourists from around the world.  Most frequented are probably the extraordinary ruins of Teotihuacan, outside of Mexico City.  The pyramids there (see above), built by a mysterious civilization that thrived between the second century BCE and the 4th century CE, are as grand as the pyramids in Egypt.  Standing atop the Sun Temple there was more moving for me than seeing the acropolis in Athens.  No landmark can better reveal the grandeur of ancient civilizations.  The area surrounding Teotihuacan was once a thriving city, larger than almost any other in the world.  Then, for unknown reasons, the civilization came to an end.  Its remnants were discovered a millennium later by the Aztecs (14th to 16th century), who appropriated elements of Teotihuacan religion and architecture, building their own pyramids in the heart of what would become Mexico's capital. 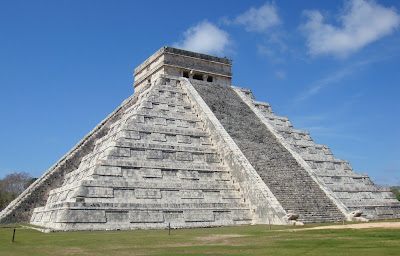 Mesoamerica's most enduring civilization was the Maya (about 2000 BCE to 1100 CE).  They were also prodigious builders, and their pyramids are among the most beautiful in the world.  The most popular for tourists is a step pyramid called El Castillo, or the Temple of Kukulkan, at Chichen Itza in the Yucatan (above).  It is a pristine and impressive site, which I visited along with other Yucatan ruins, a few years ago.  It shows off Mayan architecture at its peak (so to speak), with a grand stairwell that whose flanking sides look like who serpents bodies, which culminate in carved stone heads. 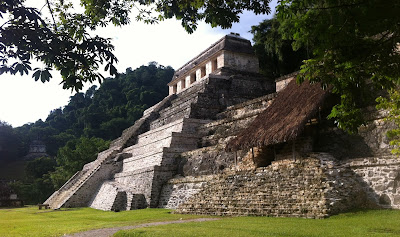 Though bowled over by the Yucan sites, I was hardly prepared for my recent trip to the southern state of Chiapas, which swelters under a tropical jungle.  Here between the dense trees are some of the finest remnants from the Mayan culture.  Most renowned are the grand ruins of Palenque (above), which thrived from about 226 BCE to 1123 CE.  Replete with pyramids, temples, and an imposing palace crowned by a lofty tower, Palenque is a marvel to explore.  Its harmonious integration with the surrounding nature distinguishes it from Chichen Itza, an brings to mind the great Incan ruins of Peru. 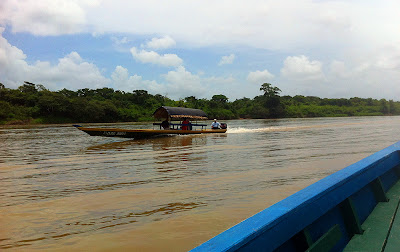 Palenque is not as touristy as Chichen Itza, but it is still a developed site, and its boulevards are lined by local vendors trying to sell their wares.  Considerably more isolated are the ruins of Yaxchilan.  To get there one has to drive a couple hours from Palenque and travel 20 minutes on a small boat (above).  Then, an unpaved path though the consuming forest leads to an impressive complex of buildings.  At the center is a grand stairway, taller than any pyramid I've climbed, peaked by a rectangular temple with a gridded stone top (below).  Of all the ruins I've seen, none gives a better sense of discovery than Yaxchilin.  One can imagine the excitement of finding this ancient capital nestled deep behind the wall of vegetation that lines the brown waters of the Usamacinta river, which flows along Guatemalan border. 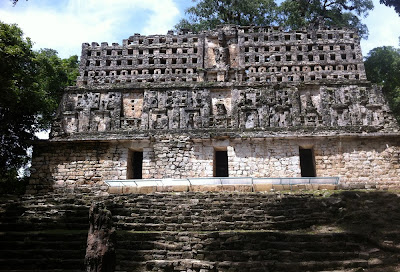 Yaxchilin thrived for hundreds of years, waring with enemies and winning victories until it fell at the turn on the 9th century.  One of its conquests was Bonampak, a site some 30 minutes drive from the Usamacinta shore.  Bonampak was under control from Yaxchitlin from about 600 CE until both cities came to an unexplained end two hundred years later.  Though much smaller and less sprawling, the ruins at Bonampak are a fine example of Maya architecture during the classical period (below). 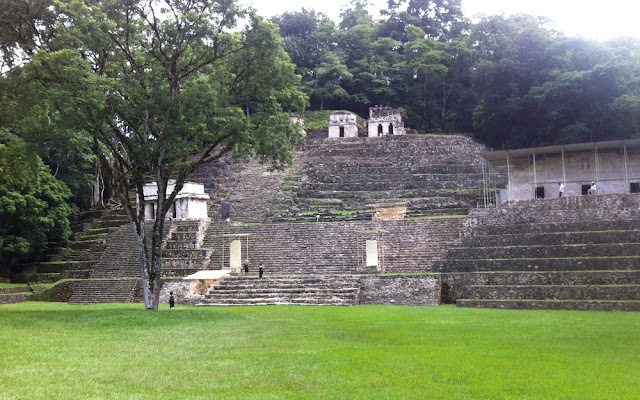 Bonampak was unknown to non-Mayans until 1946.  American and British explorers were then led to the site by local guides, and they were astonished to find three small chambers (above on the far right ) with richly colored paintings (below), created in fresco, filling the triangular walls.  At that time, these were coated by a nearly opaque layer of calcite.  Early visitors used kerosene to help reveal the images, causing irreparable damage.  In the decades that followed, less harmful techniques were used to reveal the paintings that had been hidden for centuries.  Now the humid jungle air is taking its toll.  These paintings may eventually flake away, and many of them are already difficult to make out.  Conservation work has been pursued by archeologist Mary Ellen Miller at Yale, whose team produced rich reconstructions, revealing many details no longer discernible to the naked eye. 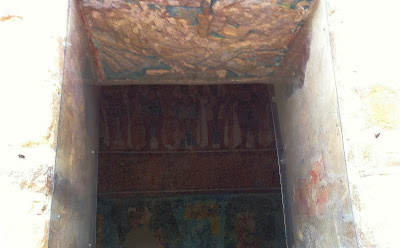 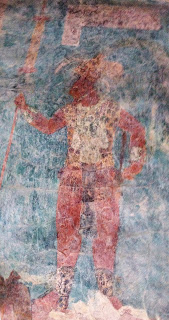 Still, seeing these decaying murals is about as impressive an experience as one can have with art.  The chambers are nestled in the white stone surface atop a wide and imposing stairway, which rises up from an expansive plaza leveling the forest green.  Nothing in this austere backdrop can prepare you for the discovery within.  In my experience, it compares only Giotto's Arena chapel and the finer tombs in Egypt's Valley of the Kings.

The murals were commissioned by Bonampak's leader, Chan Muwan, who was appointed by the authorities in Yaxchitlin around in 790 CE.  That's probably him in the left, with jaguar boots and a menacing spear.  Chan Muwan commissioned painters to create scenes honoring his heir and celebrating his military prowess.

The first chamber shows various nobles, dignitaries, and musicians gathering to pay tribute Chan Muwan's young son, and perhaps also to consecrate the building site. Here, and throughout, there are processions showing lavishly adorned figures, playing maracas, blowing horns, or dressed in fine garments with with elaborate headdresses, as in the images below.  There are some 200 figures in all. 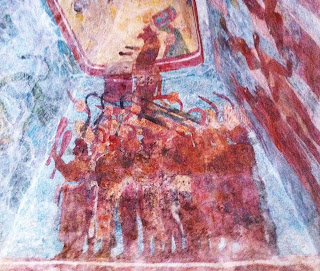 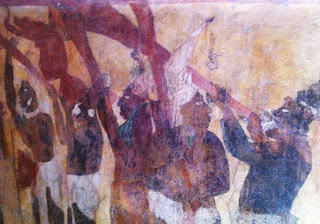 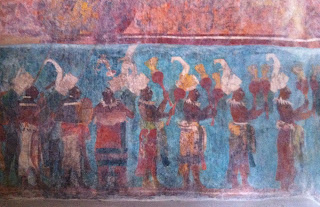 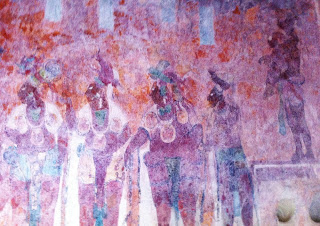 Many of the finer details are difficult to make out, because of the decaying paint, the dim lighting, and the overwhelming opulence of the surrounding scenes.  Mary Miller's conservation team has done much to reveal what these figures originally looked like, and the results are often astonishing.  The picture below can be instructively compared to a reconstruction printed in a 1996 Scientific American article by Miller, reproduced below my snapshot.  The restoration reveals four figures with dazzling animal masks, one of whom has enormous crab claws, hovering dynamically above a seated nobleman. 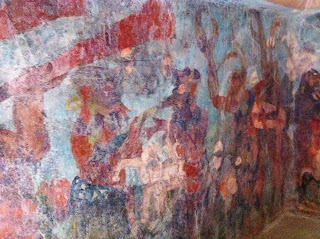 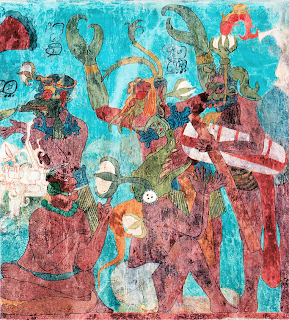 The second chamber shows great battles with enemies being conquered and tortured.  On the back wall, above the entranceway, we find the gorgeously twisted corpse of a defeated warrior.  Beside him, another figure begs for mercy, and a third, with a feathered hat, has had his fingernails torn out.  He turns inward to watch the blood flowing from his hands. 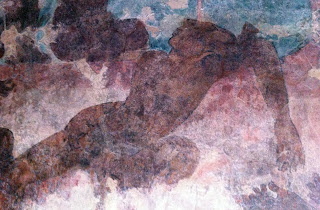 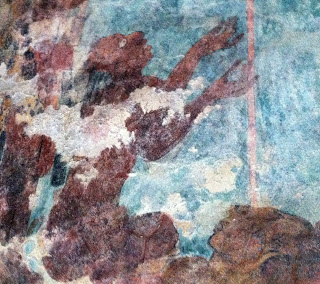 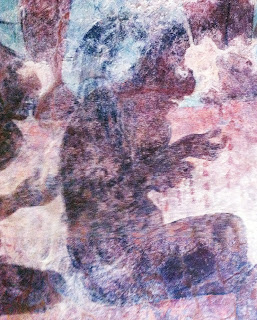 On the main wall, an enormous battle rages, which is, unfortunately, in a bad state of disrepair.  We also see a warrior (Chan Muwan?) taking an enemy by the hair, while tormenting him with a spear.  Hair pulling is a common motif for displaying conquest in Mayan art, but the curling anatomy of the victim is more expressive and naturalistic than what can be found at other sites.  This is the high-water mark for Mayan graphic arts, and it stands up to the best work in any cultural tradition. 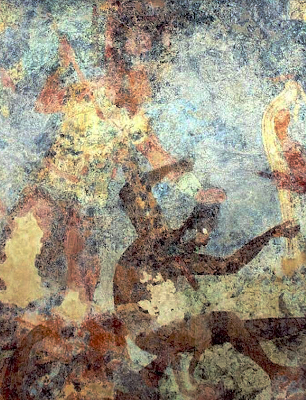 The third chamber shows dancers and other celebrants, honoring the young heir again.  In an elevated triangular region, one can see a person holding a your child (presumably the heir) below a platform on which a group of woman piecing their own tongues (below). 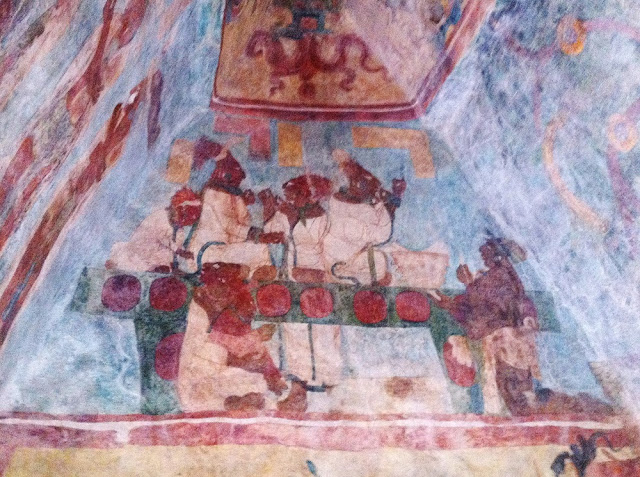 This is not the only act of self-directed violence on display. There is a beautifully painted pair of warriors, in opulent regalia, one of who may be piercing his own genitals.  These acts of bloodletting are presumably ceremonial, and are presented here in a positive light, contrasting with the horrific warfare in the preceding room. 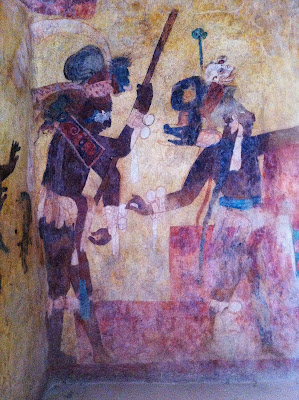 Curiously, the third chamber also includes a row of elegantly rendered seated figures whose faces have been carved out from the plaster walls.  These figures are modestly dressed, but have decorative and distinctive head wraps, indicating that they might be nobility from neighboring areas.  The defacing (quite literally) of images was common in Mesoamerica and among other civilizations of the past, including ancient Egypt.  It continues to occur today when images of deposed leaders are destroyed by angry mobs or new regimes.  Perhaps these sightless faces provide a clue about the fall of Bonampak. 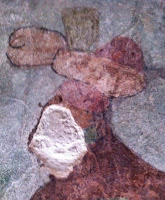 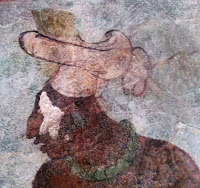 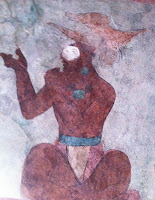 We don't know how Bonampak fell, but we do know the end came shortly after these painting were created.  Indeed, some elements remain unfinished, including panels that would have contained names identifying depicted individuals.  All this suggests a sudden demise.  The Maya had the only written language in Mesoamerica, and inscriptions here tell us something about the creators of this extraordinary site, but many more questions remain unanswered.  Fortunately, the pictures can speak to us without captions.  Centuries before Giotto, these unknown Mayan artists were creating compositionally complex, radiantly colored, evocatively posed, engagingly narrative, monolithic figure paintings that rival the greatest masterpieces of Europe.  We think of pre-Columbian civilizations as great builders and carvers.  Bonampak shows that the Maya were among history's greatest painters as well.
Posted by Jesse Prinz 25 comments: