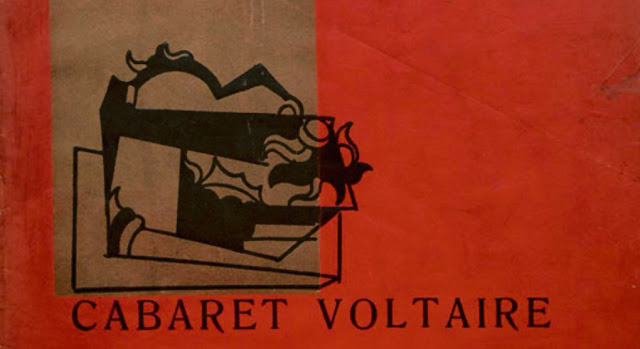 A century ago today, the Cabaret Voltaire opened its doors in Zurich, attracting a diverse group of artists and draft-dodgers credited with launching the art movement known as Dada.  It is a bit of a stretch to say that Dada has a birthday.  By 1916, Marcel Duchamp and Else von Freytag-Loringhoven had been producing readymades for over two years and Alfred Jarry's Ubu Roi had premiered 20 years earlier.  The term Dada came from the Zurich group (with several competing origin stories), but it did not make its debut on February 5, rather it appeared several weeks later.  Nevertheless, the 5th is when the Cabaret opened for business, and, without it, neither the term Dada, nor the movement, would have come into existence.  So today does have claim to being an important centennial. 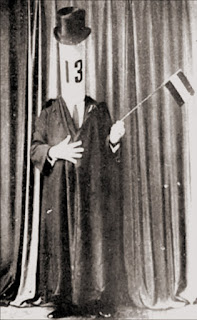 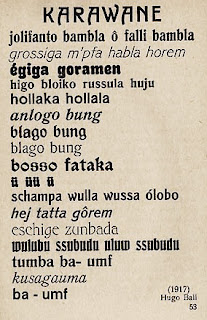 The Cabaret was opened by Hugo Ball,  a german philosopher, writer, sound poet, and composer, and his parter Emmy Hennings, a poet, dancer, and performance artist, from Flensberg, on the border between Germany and Denmark.  Ball and Hennings had moved to neutral Switzerland after becoming disillusioned with the war.  A few days before the opening, Ball put out a notice inviting artists of all kinds to come to their cabaret and share their works.  They rented a space on the same street where Vladimir Lenin also happened to be living.  While he plotted a a political revolution, the founding members of the Cabaret Voltaire were carrying out a revolution in art. 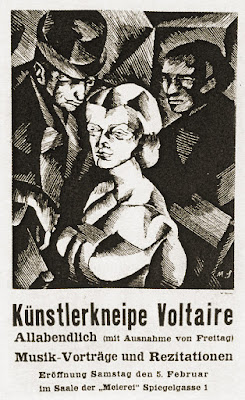 In his diary, published under the name Flight out of Time, Ball has an entry on February 5 describing the inaugural evening:


The place was jammed; many people could not find a seat. At about six in the evening, while we were still busy hammering and putting up futuristic posters, an Oriental-looking deputation of four little men arrived, with portfolios and pictures under their arms; repeatedly they bowed politely. They introduced themselves: Marcel Janco the painter, Tristan Tzara, Georges Janco, and a fourth gentleman whose name I did not quite catch. Arp happened to be there also, and we were able to communicate without too many words. Soon Janco’s sumptuous Archangels was hanging with the other beautiful objects, and on that same evening Tzara read some traditional-style poems, which he fished out of his various coat pockets in a rather charming way.

The "Oriental-looking deputation" was a group of Jewish Romanian ex-patriots.  The Jancos were brothers, and Marcel would become a core member of the early Dada group, producing masks for Cabaret performances, and a painting of activities there which is now lost (see the black and white image that remains, below).  Tzara was a poet who went on to pen some of the most influential Dada manifestos.  The unnamed Romanian is probably the painter, Arthur Segal. 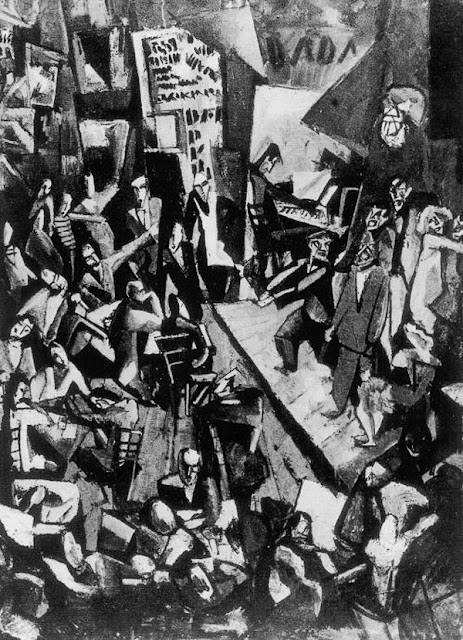 The only non-Romanian mentioned here is Hans Arp.  The Alsatian artist was already known in avant garde circles, and he was experimenting with the laws of chance in his work (as in the case below)--an important theme for Dada, since the movement challenged the modernist idea of the artist as a God-like creator.  Mastery and control were partially responsible for the violence in Europe, and these artists saw chaos as an expression of dissent. 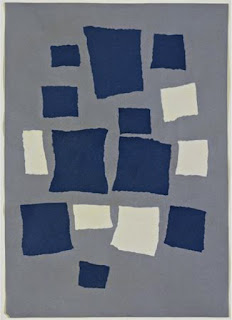 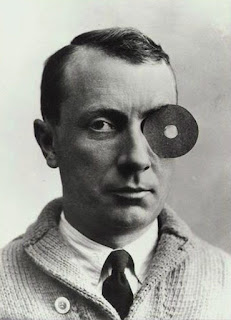 Curiously absent from Ball's list is his own partner in business and romance, Emmy Hennings.  She was a performer who had been involved with the expressionist movement before the war, and had several romances with expressionist writers, while supporting herself through sex work.   Her role at the Cabaret is difficult to overstate.  In addition to launching the venture with Ball, she became the star act, dancing and acting in elaborate costumes, reading poems, and functioning as the venue's hostess.  She also, evidently performed with puppets, and she produced a compelling picture of puppets for the first Dada publication, called Cabaret Voltaire. 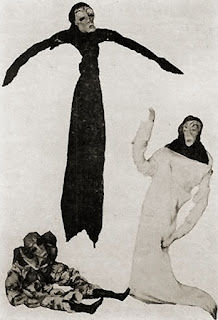 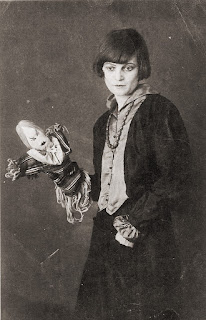 The Cabaret Voltaire journal also includes several of Henning's written works.  One of these is a poem describing her addiction to morphine (called "Morfin," which is the Danish spelling).  The idiom of her poems tends to be more expressionist than Dada, often expressing deep despair.   At the same time, they exhibit a kind of Dada irreverence, in the brazen rejection of prevailing mores.  Another poem, written around this time is called After the Cabaret:

In the early morning I go home.
The clock strikes five, it is already becoming light,
But the light still burns on at the hotel.
The Cabaret is finally out.
On one corner, children cower,
Farmers are already driving to the market,
Men, quiet and old, are going to church.
The bells ring earnestly from towers,
And a whore with wild hair
Still wandering around, bleary-eyed and cold.
Love me pure from all sins.
Look, I've watched many nights. 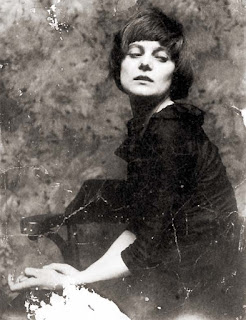 Here, Hennings recounts the way the city stirs in early morning after a night at the Cabaret Voltaire (which was below a hotel).  The reference to church bells and the new dawn portends the fact that Hennings and Ball would soon leave Zurich and turn to Catholicism.  The "whore" presented sympathetically here may well be a personification of Hennings herself, with an empowering declaration of her innocence, and also a revelation of her position as a kind of overseer, who watches the goings-on at night.  The poem can also be read as a metaphor for Dada.  As the ordinary world, with children, farmers, and churchgoers, carries on in its neatly ordered way, Dada, with its wildness and rejection of conventional values, watches vigilantly.

Also unmentioned in Ball's diary entry on the opening night is Sophie Taeuber-Arp, who may have been there with Hans.  Among the most accomplished visual artists in the group, Taeuber-Arp experimented with painting, weaving, sculpture, and puppet-making.  She made important contributions to several art movements, and her constructivist canvases are among the best examples of early formal abstraction. As a member of the Dada group, she also danced in Cabaret performances (see below), and she was a co-signer of a key manifesto.  She was also the only native Swiss national in this original cohort.  In celebrating Dada, we should recall that it was among the first movements to include many important female artists, though their oversight in Ball's diary and other testimonials (Richter and Huelsenbeck, for example) also reminds us that they were not given equal status.  Their pivotal place in this history has only come into focus in recent years. 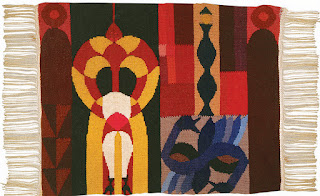 The Cabaret Voltaire still stands today.  Judging from the times I've been there, I can say it is now more of a gift shop and occasional exhibition space than a center for avant garde performance.  But there is a sense in which the Cabaret Voltaire lives on everywhere.  Dada's impact on art is so deep and so enduring that it can now be seen as the most important Western art movement of the last century.  Cubism and expressionism, in contrast, look quaint and outmoded, whereas Dada keeps getting reborn and remains deeply integrated in contemporary art practice.  That is ironic for a movement that described itself as anti-art. 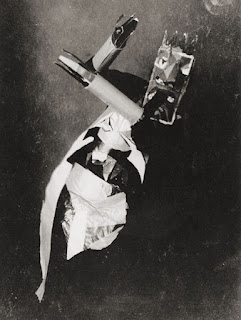 I want to end this brief birthday note by reiterating what brought these transgressive artists together in 1916.  The world was on fire.  Millions were dying.  Dada was not just a frivolous intellectual exercise or a practical joke.  It was a cry of protest.  In thinking about the enduring legacy of the Cabaret Voltaire, it is also important to keep that in mind.  Dada lives on, in part, because there are still many flames to put out.  We need art, and we need Dada. 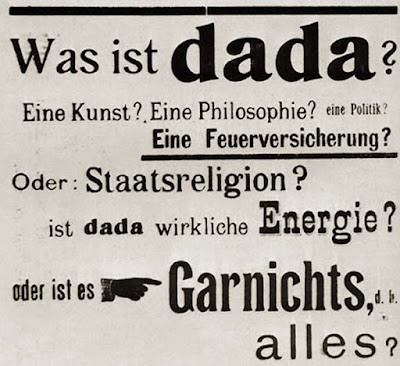