MoMA is hosting the first major retrospective of Alighiero e Boetti, a major figure in the Arte Povera movement who died prematurely of a brain tumor in 1993.  Boetti is best known for his "mappa"--large embroideries that he commissioned Afghan artisans to make, showing maps of the world in which each country is demarcated by its national flag.  A detail from three of these (above) how the Afghan artists make different aesthetic choices, and close attention will also reveal changing national boundaries.  Of equal interest are the embroideries that Boetti commissioned at the end of his life which attempt to depict "everything" (below).  These spectacular swarms of shape and color evoke Pollack, a sly joke that converts the aesthetic of abstract expressionism's most extreme representative into something neither abstract (each splash of color represents an object) nor expressive in Pollack's sense (they are produced though dizzyingly anal needlework rather than throwing paint on canvas). 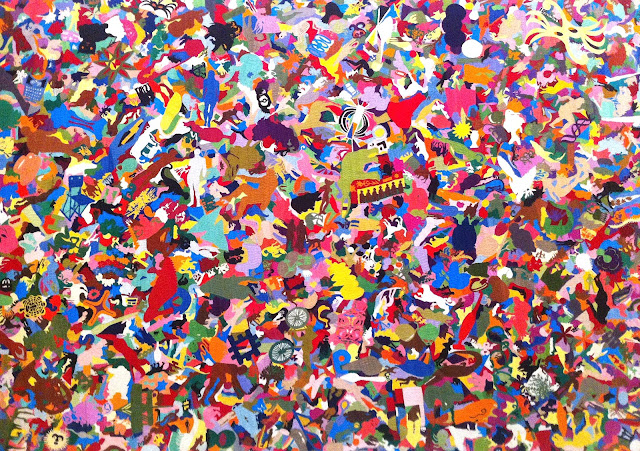 It would be a mistake, however, to reduce Boetti to these embroideries.  His output encompasses everything from wooden constructions, to metalwork and mail art.  There are also a number of fascinating themes running through his work.  One is duality.  His adopted the middle initial "e" (Italian for "and"), and some works depict the artist writing messages to himself, in handwriting written with both hands, suggesting an inner twinning of his psyche.  The exhibit opens with a giant reproduction of a doctored photo depicting Boetti standing next to himself.

Another theme is order and disorder.  Many works explore the balance between these poles, even incorporating the corresponding words in Italian.  One graphic example is Boetti's "Natural History of Multiplication," 12 large drawings showing an increasingly complex assembly of little abstract shapes (two panels are reproduced above).  We seem to move from order to chaos, but even the most chaotic seem to have been algebraically assembled, and more ostensibly ordered panels have an organizational logic that is impossible to decipher.

This brings us to a final theme: cryptography.  In some of Boetti's large biro drawings, one border is decorated with an alphabet and the rest of work consists of a large monochrome field dotted with little commas (see the detail above).  Each comma lines up with a letter of the alphabet, allowing viewers to decode a hidden word or message.  Boetti commissioned people to make these drawings for him, using biro pens (an expression of his Arte Povera ethos, which emphasizes use of inexpensive materials).  He also made sure that both men and women would execute the work (embodying his interest in duality).  And, of course, the collective nature of their production also recapitulates the mappa project (indeed, the pen strokes strongly resemble embroidered threads).  Thus, we see Boetti's core interests reflected here.  We are reminded that Boetti is not just a visual artist.  Though visually arresting, his work is a sustained exploration of a network of ideas.  One of his Biro pieces is called called "Six Senses"; if you decode the commas, you find words for the five classic senses followed by pensare, the Italian word for "think."
Posted by Jesse Prinz