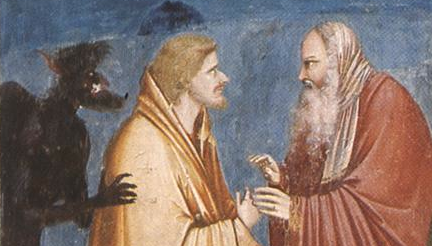 No figure deserves greater credit than Giotto di Bondone, for ushering in the revolution in art that we now know as the Renaissance.  Though others, like Cimabue, had shifted from the constraints of Gothic art, Giotto introduced a degree of naturalism that had not been seen since the natural world.  Naturalistic, yet not classical in sensibility.  Greco-Roman art is marked by a kind of heroic theatrics, grotesque at times, and always idealized.  These vulgar tendencies would eventually make their way into Renaissance art, but, for brief moment at its inception, Renaissance painting had a poetic calm, inherited from Gothic spiritualism.  Giotto preserves that poetry, but translates the otherworldly focus into something movingly terrestrial. 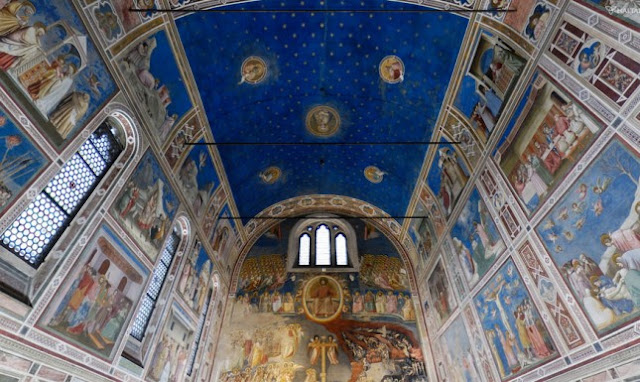 I recently had the great thrill of seeing Giotto’s masterpiece, the Scrovegni Chapel in Padua (known to art historians as the Arena, because a roman arena once stood on the same site).  Enrico Scrovegni came from a money lending family, and allegedly built the chapel in order to compensate for the sin of usury, which might otherwise mean an eternity in hell.  He commissioned Giotto to pain frescos covering all the interior walls of the chapel.  The work, completed rapidly between 1305 and 1306, is one of the greatest masterpieces in the history of art.  The two walls are divided into rectangular tableaus, depicting the life of Mary and of Jesus.  Portraits of the two also appear on the ceiling, like two planets set against as starry blue, protecting parishioners like a heavenly mantel.  On the central rear wall of the chapel, we find Giotto’s piece de la resistance: the Last Judgment.  At the threshold of Giotto’s hell, Giotto depicts his patron, Scrovegni, delivering the chapel as his gift of penance. 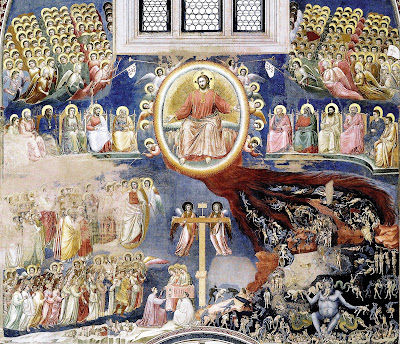 Goitto’s hell is a remarkable place.    It seems to pour out of a lava pool from the foot of an enthroned Christ figure, who looms with stiff majesty above flanks of angels.  The lava pool is a tangle of tortured bodies set against a dark background.  Some are strung up like drying meat, other lie limply, like rags, and still others writhe in pain.  Interspersed among them, we find teams of gray-blue demons, who prod and torment the hapless naked damned.  There is also a hanging Judas.  Elsewhere in the cycle, Judas appears, hook nosed, receiving a payoff for betrayal, with a shadowy demon coaxing him on. 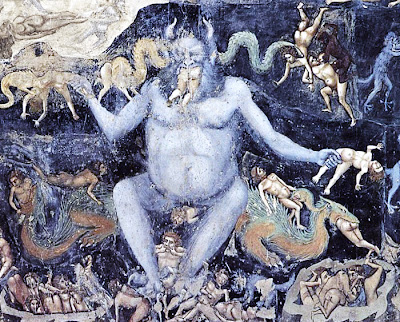 At the center of Giotto’s hell, we find an enormous and imposing Satan, one of the greatest monster’s in western art.  Giotto’s Satan is a portly slate blue figure, with furry jowls and twisting horns.  He is perched on a man-eating dragon, his feet are crushing other a cluster of bodies, and each outstretched hand holds another body.  Most disturbingly, the lower half of a human body dangles from Satan’s mouth, forecasting Goya’s infamous black painting of Saturn Devouring his Son.  Giotto’s This Satan is king of cannibals, an unmovable mountain of cruelty whose round belly practically pulsates with the girth of previous fleshy meals. 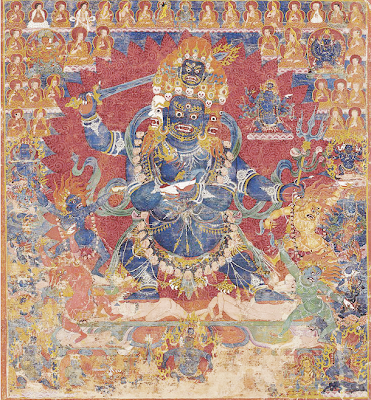 Curiously, Giotto’s Satan also bears a striking resemblance to the Mahakalas of Tibetan art.  The one reproduced below was recently auctioned at Christie's.  Mahakala is a protector.  Placed in a home or a monastery, he would protect his owners, by absorbing and deflecting evil forces.  Given the resemblance, one wonders whether Giotto had seen such images, or whether an influential Tibetan painter had made a field trip to Padua.  In any case, the Tibetan works invite a kind of Gestalt shift.  For all his ravenous menace, it is hard not to see Giotto’s Satan as a positive presence.  He serves as a warning for believers, and thus has a didactic function that can be regarded as positive.  But he also functions as an artistic domestication of evil.  By depicting Satan so compellingly, as the visual epicenter of the Arena frescos, Giotto has converted evil into an enchanting mythic beast.  This is a fairly tale Satan, part of a gripping moral tale, but far from charmless.  Indeed, Satan’s posture echoes the enthroned Christ, but he steels the show. 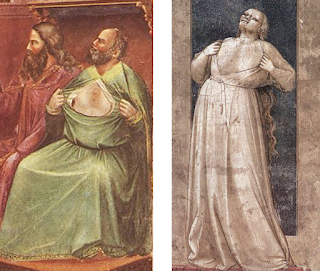 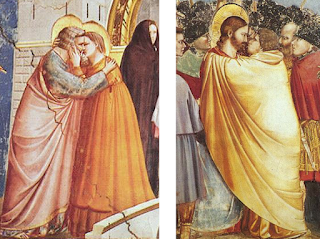 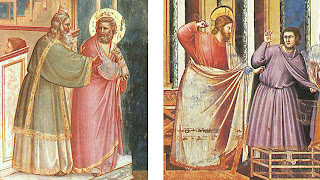 Echoes, incidentally, are a fundamental feature to Giotto’s Arena.  There are multiple points of compositional and narrative parallelism.  Some examples are reproduced above.  There are two panels with seated figures, two panels with figures on horseback, two sloping mountains with a tree, two mobs with spears, two hangings, two sacrifices (Joachim’s and Christ on the Cross), two babies in bed, two expulsions, two resurrections, two gaping holes (heaven and hell), two kisses, and two annunciations, and two figures bearing the chests.  One these two figures is Caiphas, who condemns Christ, and in that very moment rends his clothes to expresses contempt.  The other figure is the female personification of anger, one of the seven deadly sins.

Giotto’s seven sins are unconventional.  Anger is standardly included on lists of sins, and Giotto also has one other conventional sins: Envy.  But his list also includes Injustice, Inconstancy, Infidelity, Folly, and Despair.  Missing are Avarice, Gluttony, Lust, Pride, and Sloth.   Giotto’s omissions relate to his principle of parallelism:  he depicts seven virtues.  But it is hard to resist the idea that there is something editorial going on here, as my colleague Doug Lackey argues in a wonderful paper, “Giotto in Padua: A New Geography of the Human Soul.”  By removing Lust and Gluttony, Giotto distances himself from asceticism.  By including Folly, he denounce blind faith, an attitude that also comes through in a small cartoon of a person with sticks for eyes, painted nearby the Folly figure discreetly above the Chapel’s side door (so discrete, in fact, that I didn't find her until I made a second visit).  The omission of Pride raises questions about Giotto’s own ego (he may have recognized the magnitude of his own artistic achievement), but it may also reflect the emerging humanism at the dawn of the 14th century.  Giotto implicitly invites viewers to take pride in human accomplishments.   Perhaps most touching is his inclusion of Despair among the sins, and its counterpart, Hope, among the virtues.  As someone who is deservedly regarded as the first Renaissance painter, it is fitting that Giotto advocates a positive outlook on life. 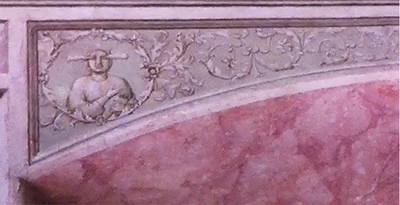 This brings us back to Giotto’s hell.  Fire and brimstone theories promote fear, and one might expect a similar mood to pervade a chapel whose central panel depicts the Last Judgment.  It is also believed to have been a funerary chapel, because of its barrel roof.  But Giotto resists that sentiment.  Unlike some of his Flemish counterparts who paint hell with terrifying relish, Giotto’s hell is more positively contextualized in the twilight blue of the Arena.  It is one option for humankind, but also a place of myth and legend.  The chapel itself embodies another option: beauty, creativity, and a celebration of human life.
Posted by Jesse Prinz