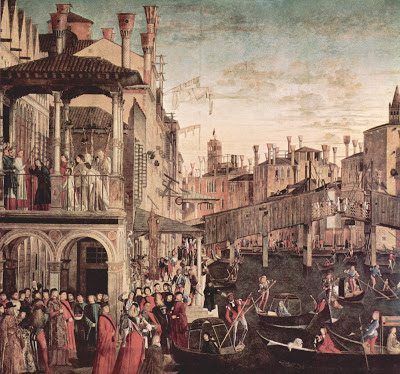 Of all the Venetian masters--including Bellini, Mantegna, Giorgione, Titian, Tintoretto--there is none I like more than Vittore Carpaccio.  "Carpaccio?" you ask.  No, not thin meat slices on a plate, but one of the major painters in Venice at the turn of the 16th century.  Better known in Italy, Carpaccio remains something of an unsung hero in the Anglophone world, and, after a recent visit to some of his masterpieces, I'm delighted to sing his praises on artbouillon.

Carpaccio is best-known for his grand multi-figure painting cycles.  The two most important can seen in Venice.  At the Accademia, visitors can find nine enormous canvases that tell the legend of St. Ursula.  Daughter of the British king, Ursula took her new husband, a pagan convert to Christianity, on a pilgrimage to Rome.  On returning, they and their fellow pilgrims, were massacred by the Huns, after Ursula refused the advances of the Hun leader.  The paintings are lavishly detailed and almost formal to a fault.  The three standouts are the panel showing Ursula meeting the Pope, Ursula's martyrdom and funeral, and a depiction of Ursula asleep, having a dream that portends her impending death.  Each shows off a different aspect of Carpaccio's talent. 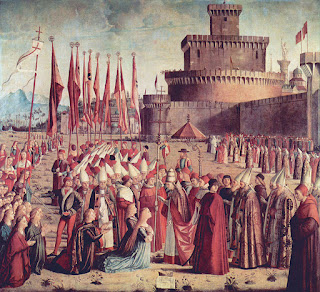 The Pope panel appeals in large part because of Carpaccio's use of visual repetition (right).  He depicts a group of cardinals in conical hats, beneath raised banners, creating a visual pattern that is at once rhythmic and still.  Another Carpaccio trademark, in the deeply recessed landscape.  Carpaccio has an extraordinary sense of space.  His characters often appear lines up at the front of expansive clearing with extraordinary architectural details and nature scenes in the distant background.

The martyrdom and funeral panel shows a brutal massacre on the left, and a funeral on the right.  The massacre is brutal and grotesque, but retains Carpaccio's sense of stillness.  Ursula kneels, statue-like, ready for the sword. 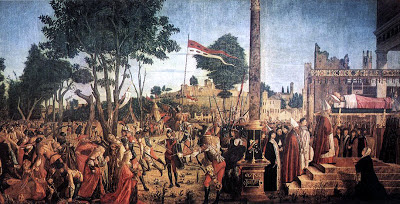 My favorite panel is the dream.  Another Carpaccio trademark is the empty chamber, with one or two figures.  Ursula's still body is the visual echo of her position in the funeral panel, but the empty space her contrast sharply with the chaos of the martyrdom.  Carpaccio's use of empty space reminds me of Antonio, who famously used emptiness to great psychological effect.  Here, in the serenity of the room, viewers are invited to fill the open areas with images of the coming violence. 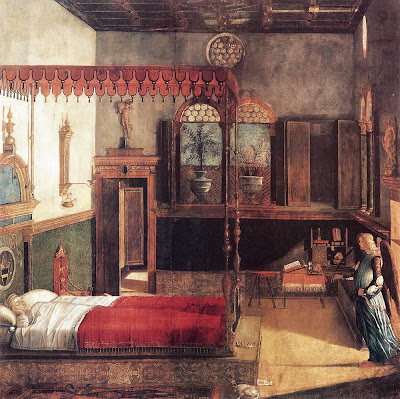 Violence is also a theme in another remarkable Carpaccio at the Accademia.  In his Ten Thousand Martyrs of Mount Ararat (below left), Capraccio depicts a ghastly scene, with an army of Roman soldiers on the ground, and trees strewn with dying bodies.  Once again, the violence is presented with classical reserve, with rhythmic repetitions. 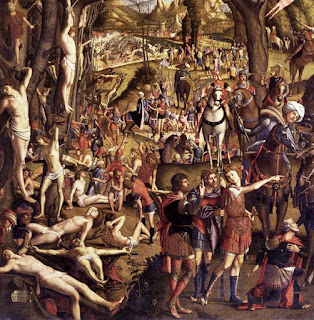 Even more impressive than the Accademia paintings are those on display in the Scuola Di San Giorgio Degli Schiavoni.  Here there are several cycles, lining the upper walls, depicting patron saints of the Scuola.  These are my favorite paintings by Carpaccio.  On the west well, we find depictions of St. George.  The panel depicting his conquest over the dragon illustrates, once more, the artist's tendency to  present violent scenes with poetic stillness.  George is on a leaping horse, driving a spear into the dragon's jaws, but the moment is completely frozen, and it is almost impossible to imaging the figures in motion.  We also find repetition and opposition, the vile dragon is the mirror image of the noble horse.  The landscape is classic Carpaccio: an open plain with fantasy architecture on the horizon.

It is also a grizzly scene, strewn with the dismembered parts of the dragon's victims.  Particularly poignant is the naked upper body of a bisected woman, whose final repose, above above a still life of body parts, looks more like a calm sleep. 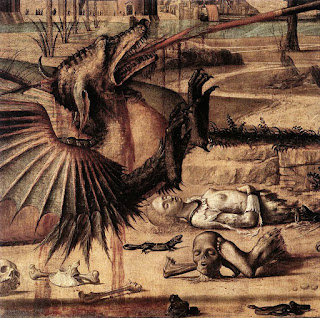 The east wall of the Scuola hosts my favorite of all Carpaccio's: St. Jerome and the Lion.  While living as a hermit, Jerome tamed the savage beast by plucking a thorn from it's paw.  Upon return, he presents his feline friend to his fellow monks, who scatter in terror.  Visual repetition, dynamic stillness, and expansive space are all used to masterful effect here. 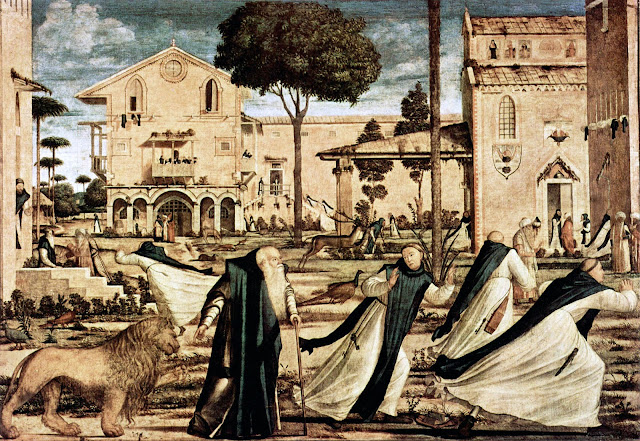 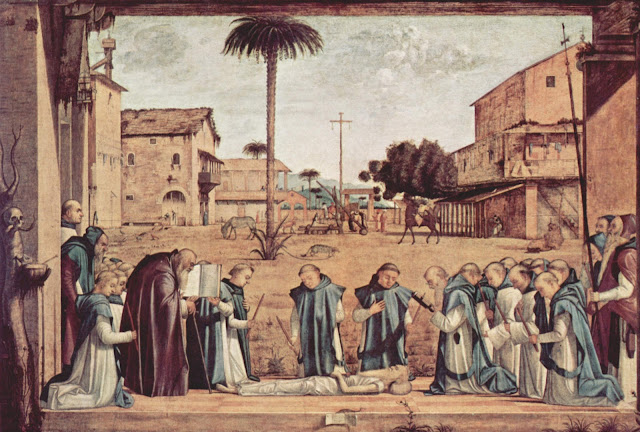 Carpaccio's most famous painting is also in Venice (below left), but at the Correr museum in the St. Marco complex.  When I was visiting it had been temporarily relocated to another exhibition space, to be included, bizarrely in a Manet show.  (That show's most exciting feature was a juxtaposition of Titian's Venus of Urbino and Manet's Olympia, which is bases on the Titian.  Amazing to see these side by side.)  The painting shows two ladies on a balcony, and it filled with subtle doublings: two vases, two doves, two birds with long tail feathers, two shoes, and two adorable dogs (one aggressive, one scared). 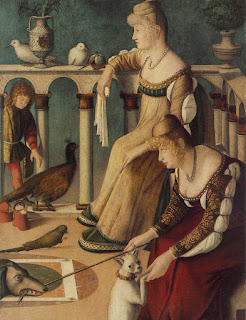 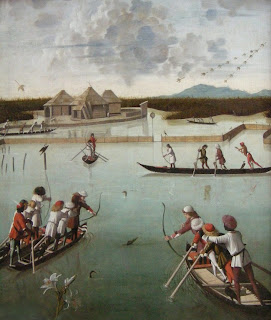 Recent scholarship has revealed that this enigmatic work is actually the lower half of a long painting that was split.  The upper register shows a hunting party (above right), and is owned by the Getty Museum.  I combined them here to give an impression of the unified work.  The two ladies are evidently waiting for the hunting husbands to come home.  The combined work reveals this to be another exercise in pictorial depth.  The receding landscape forecasts Yves Tanguy, and has a dreamlike quality that would be appreciated by the surrealists.

Animals are pervasive in Carpaccio's works.  Dogs and birds make frequent cameos, and I have also mentioned Jerome's lion, and St. George with his horse and dragon.  The grizzly detail from the St. George painting also includes a gaping lizard, a micro-reflection of the dragon above, gesturing, perhaps, at the ubiquity of evil. Below the lizard there is also a frog and a snake.  The Jerome paintings include a donkey, horses, deer, and an exotic creature with a long body and a tufted tail.

One of the Ursula panels includes a peacock next to a monkey.  Searching for these hidden critters adds a further layer of enjoyment to the work, and also reveal Carpaccio to be an observant naturalist.  He also seems to be an animal lover.  His dogs sometimes appear to be symbols of fidelity (for example, an elegant canine stands just below St. George in a panel showing his baptism), but sometimes they are mere companions. 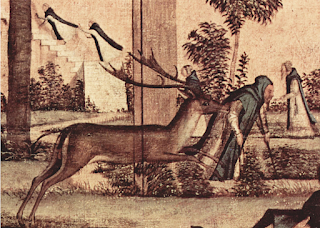 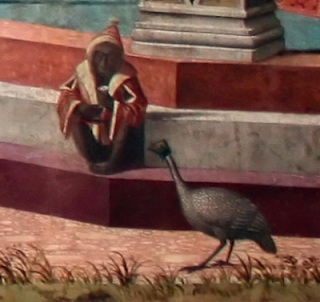 The Schiavoni Scuola has a magnificent portrait of Augustine.  This geometric interior is compositionally similar to the one in Ursula's dream, but instead of an angel visiting the main figure, we find a little white dog.  A similar dog also appears discretely in another celebrated Carpaccio painting: The Miracle of the True Cross, at the Accademia (top).  Ostensibly a painting of the old Rialto bridge in Venice, the titular miracle is presented inconspicuously in the upper right: a possessed monk is cured of his madness.  The left side shows gondolas in the grand canal, one of which contains the white dog. 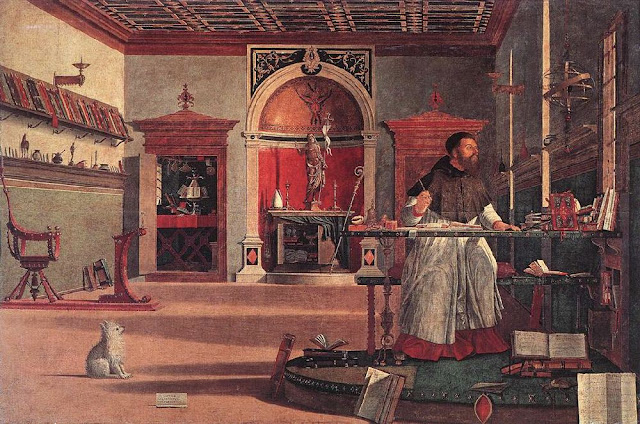 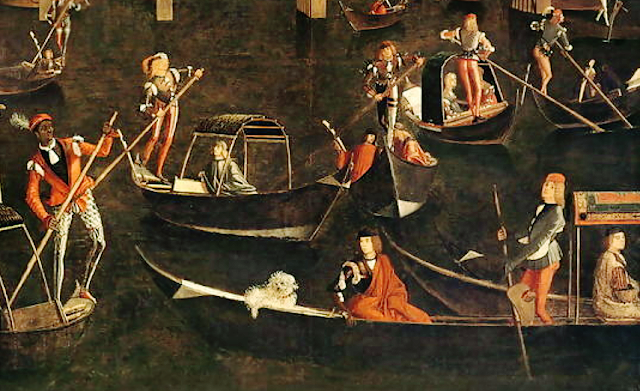 I will end with a final image, which lives, alas, not in Venice but in the spectacular Gameldegalerie in Berlin.  This is a lamentation of Christ, which embodies too of the features so striking in Carpaccio's work.  First, there is the sense of space.  This picture seems to stretch miles, with the main action lined up in the front, and then a layered succession of scenes receding into the picture plane: lamenting Marys, tomb guards in Ottoman regalia, musicians in a hill, ruins, and distant crosses.  Second, we get Carpaccio's stillness: the outstretched Christ, the guards leaning on a stone tomb door, and the lamenters who lean against each other in sullen mourning, rather than flailing in despair.  As with most of Carpaccio's paintings, the lines tend to be horizontal or vertical, creating grid-like composure, and there is a carefully contrived repetition of red accents, trees, and sculls, which give the picture a a rhythmic coherence.  Carpaccio gives us a harmonious world, filled with endless details to explore.  His paintings are not so much seen as entered, and, even when topically dark, one discoverers such profound comfort there, that those who enter will never want to leave. 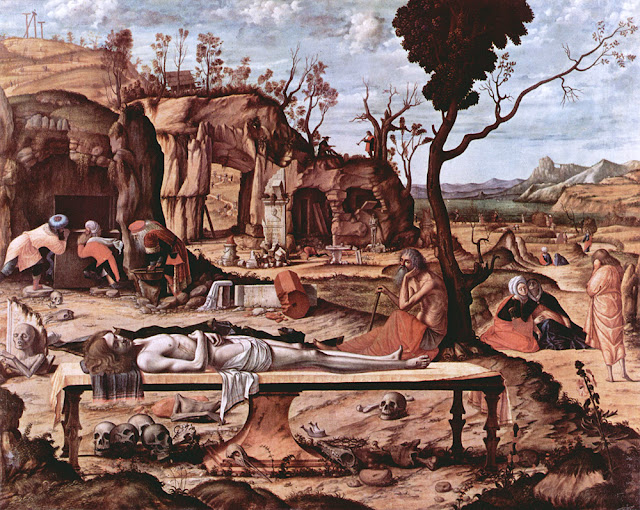