The Baltic states are not on the art map for American and Western European travelers, but perhaps they should be.  Especially Riga, the capital of Latvia, which boasts a beautifully preserved historic city and some of the best Art Nouveaux architecture in the world.  The image below, with an elongated head motif, is from Riga's most photographed building, which was designed by Mikhail Eisenstein, father of the famed director. 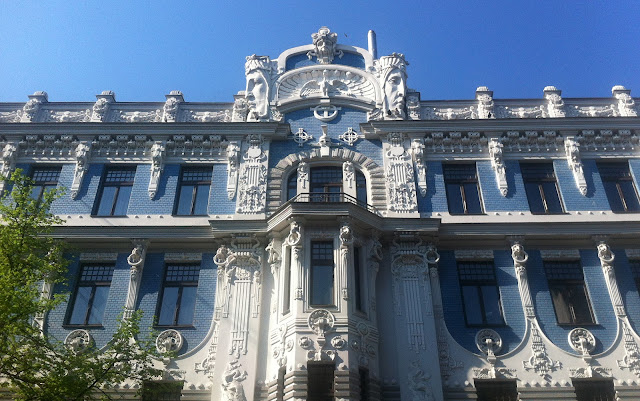 Riga also a number of museums.  The main one was closed during my last visit, a week ago, but I found it more of a curio on an earlier trip: three centuries of Latvian artists painting in international styles, but only a handful of standouts (such as the constructivist, Gustav Klutsis and the modernist, Voldemārs Matvejs).  This trip took me to the Art Museum Riga Bourse, which was well worth a visit.  Situated in a gorgeously restored building in the heart of old Riga, the collection includes some impressive minor works from past centuries of Latvian art, as well small collections from East Asia and Egypt.  It also has a grand hall, rich with classical detailing, for temporary exhibitions.  I was lucky to catch a show called "Four Moving Poems" by Lech Majewski. 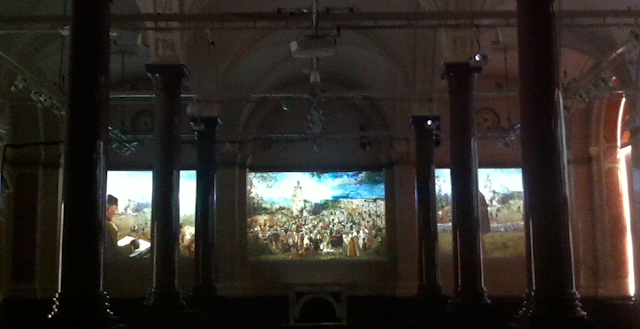 Majewski is a Polish artist and filmmaker.  He gained initial fame internationally when he wrote the screenplay for Basquiat.  Two years ago, he released a stunning feature called The Mill and the Cross.  Seek it out if you missed it.  The film painstakingly reconstructs Bruegel's painting, The Procession to Calvary.  Using an innovative technique that sets several layers of live-action film against a painted backdrop, Majewski manages to bring Breugel's masterpiece to life.  More than that, he enters into the painting, creating narratives about various characters who appear as anonymous miniature figures in the original painting.  The film is a technical triumph, but it also does much to capture the mood of the time.  We learn, for example, that Flanders had been conquered by Spain, and the red robed horse riders in the painting are actually Spanish soldiers.  The painting is part of the passion cycle, but Majeweski reveals how Bruegel has politicized it, by depicting Christ's Roman persecutors as the occupying forces from Spain. 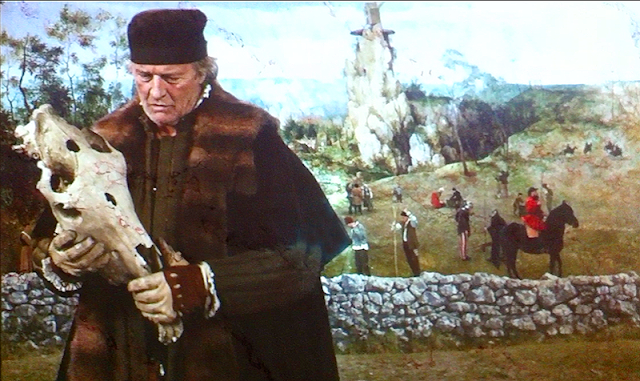 The exhibition at the Bourse Museum included three large video works in this same style, called the "Breugel Suite," which appeared earlier at the Louvres and the Venice Bienalle.  There are also selections from three other video cycles made over the last ten years.   One screen shows a group of museum goer's reenacting Rogier van der Weyden's deposition.  I was struck by the concept because the art historian, David Freedberg, has used this Rogier painting as an example when arguing that viewers are disposed to spontaneously imitate the actions and emotions depicted in artworks.  I don't know if Majewski knew of Freedberg's work when he created the piece, but it is a remarkable coincidence, if not.  The piece also exemplified Majewski's affection for old northern masters.  In a terrific interview at Arterritory (a Baltic/Slavic/Skandi art blog), he expresses contempt for contemporary art. 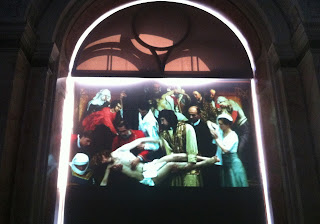 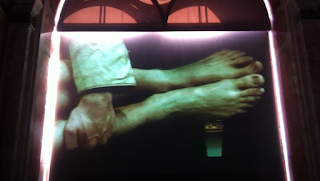 Majewski's attitudes toward contemporary art are ironic, since nothing in more au courant than video art.  Still, these works have a classic sensibility.  This is a source of their strength, but they occasionally lack freshness as a result.  All are expertly crafted.  Most of the imagery is original and affecting, but there are occasional lapses.  One showing a woman undressed in the woods and another showing a woman boxing on stage struck me as bit trite.  Overall, however, the artist emerges as an undeniable virtuoso.  A piece called The Roe's Room (last still below) is a visualization of an opera based on Majewski's autobiographical poetry.  Majewski is nostalgic for a time when artists did everything.  Nostalgia is a bit of a liability, but Majewski's best work uses cutting edge techniques to bring his Renaissance aesthetic into modern form.  The Bourse Museum was a perfect setting for this work: an old interior updated. 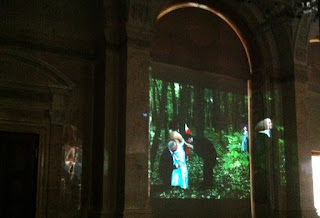 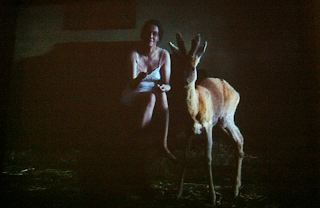