Among Venice's many treasures, few are more spectacular than Tintoretto's Paradise, which hangs in the Doge's Palace, next to San Marco's Cathedral.  I saw it on a recent art pilgrimage.  The painting was commissioned when Tintoretto was 70 years old, and was executed with the help of his son, Domenico (three of Tintoretto's children became painters, including his daughter, Marietta Robusti).  The painting is a roaring sea of activity--far too detailed for the eyes to take in at once.  At 74 x 30 feet, it is about the size of a tennis court, and it spans a massive wall in a room that was once the seat of Venetian power.  It would be Tinoretto's last masterpiece. 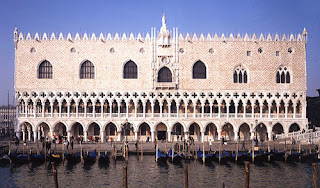 For a thousand years, Venice was ruled by elected Doge's (or "dukes").  In 1340, construction began on a Gothic palace, that would serve as a residence, a seat of government, and, in the lower chambers, a prison.  No chamber in the palace was more important that the Great Council Hall, where up to 2,000 aristocrats would gather to legislate policy.  The room was originally decorated with frescoes by Guariento di Arpo, a trecento painter from Padua, but those were destroyed in a great fire in 1577.  Below you can see a badly damaged detail of a Guariento fresco, on display at the Palace, as well as a detail from a well preserved work, showing the artist's impressive but decidedly Gothic style. 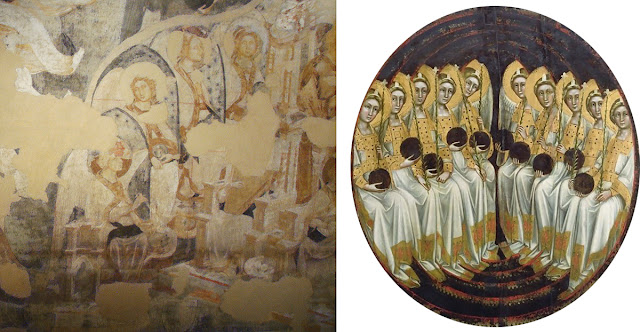 After the fire, the Venetian government needed to rebuild the Great Council Hall, and they decided to hold a contest to selected a painted for it's walls.  Tintoretto submitted a sketch, as did Veronese and Bassano, among others (those three sketches appear below in this order).  The commission was originally granted to Veronese and Tintoretto, who were evidently expected to collaborate, despite their different styles.  This plan changed when Veronese died in 1588.  At that point, Tintoretto was given the commission.

At that point, Tintoretto changed his original design, perhaps to catch up with prevailing trends in style, and he executed another sketch (below), which is currently under restoration at the Thyssen Museum in Madrid.  The new design conveys the spirit of the final work, though with less grandeur.

Tintoretto is perhaps the grandest of Venetian painters.  When he submitted his first Paradise sketch , he was still completing his work for the Scuola Grande di San Rocco--two decades worth of mammoth paintings that remaining the crowing achievement of his career.  Dark and imposing, these show of Tintoretto's talent as a dramatist.  He breaks from compositional conventions to bring new energy to familiar subjects.  His crucifixion, for example, has the familiar suspended Christ with mourners at its center, but the surrounding expanse is swarming with equestrian soldiers, and executioners who labor to erect the two other crosses that will eventually flank Christ's sides.  The is not a painting of an temporally fixed occurrence, but of an unfolding event.  One almost expects the scene to change after each glance away.

Drama is certainly present in his Paradise painting as well, but it departs from his more canonical work in various ways.  There is more color in his palette, less narrative, and the composition is decentralized. Above I called it a sea of activity, and this is more than a metaphor.  The painting looks like a turbulent body of water, with dark blue waves and white crests.  It resembles the seascapes created by some of the great ukiyo-e printmakers of Japan, like the one below by Utagawa Kuniyoshi.

Tintoretto's sea is made of people.  Even the white crests are filled with people.  His earlier sketch for the painting was also punctuated by white forms, but these were clouds.  The final version is astonishing in part because there is no negative space.  Every inch of the surface teams with figures ascending into Paradise.  These figures are layered on top of each other, with the highest layer occupied by winged angels hovering into the composition from all directions.  At the center there is an ball of orange light, the gateway to heaven, but the rest of the painting seems almost devoid of orientation.  There is no up or down, no sky or earth, no stable point on which to perch.  Tintoretto's Paradise is a crowded place.  It would be suffocating were it not for the overall all sense of flow.  Each individual body is part of a larger whole here.  It is a paradise in which identity gives way to dynamic unity. 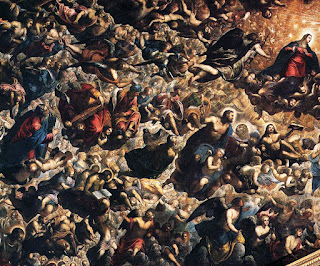 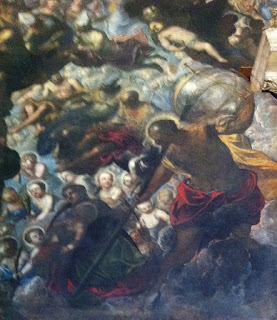 One consequence of this unity is that it is difficult to discern the people in Tintoretto's painting.  It might be the most figurative populous picture in the Western canon, but, paradoxically, the figures are almost invisible.  They are a texture, forecasting Pollack's action paintings and other exercises in pure abstraction.  To me, this is the what makes the work so compelling.  It is painting whose whole is not only greater than its parts, but seems almost independent of those parts.  When one focuses in on interlocked bodies from which it is constructed, one loses the larger visual design, and, when one steps back, those bodies magically disappear, and the grand canvas (perhaps the largest painting on canvas in history) breathes as one.