Wangechi at the Nasher 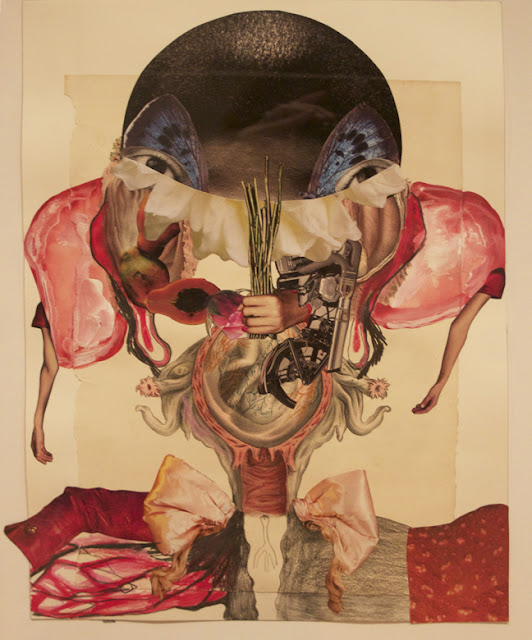 I used to live in Chapel Hill, North Carolina.   It’s where I found my bearings on the arduous path of the artist.  Some might think it an unlikely place to find art of the highest caliber. Think again.   In the neighboring city of Durham, art has found a formidable home at the Nasher Museum. Its curator of contemporary art, Trevor Schoonmaker, has ushered a number of artists, many of who are African American or of African origin, to the forefront.  The exhibitions he has orchestrated have been ground breaking and insightful. The most recent superstar exhibiting at the Nasher is Wangechi Mutu.  Originally from Nairobi, Kenya, a Yale MFA graduate, and now a Brooklyn based artist, Wangechi first crossed paths with Trevor at Sikkema Jenkins gallery in Chelsea some fifteen years ago.  They have remained friends and colleagues ever since. 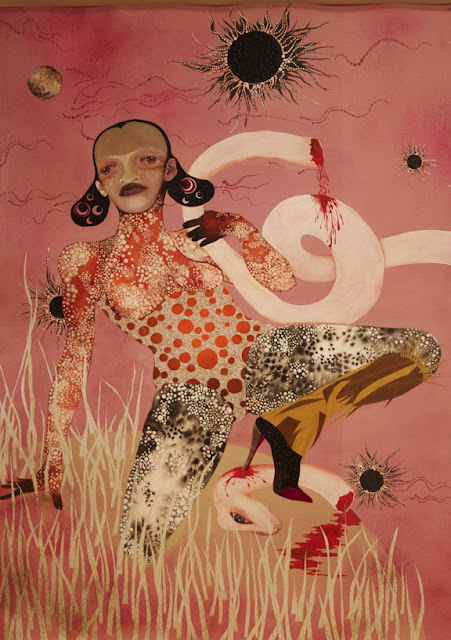 As one who works with collage, it’s no surprise that I was bowled over by her magnificent works.  She pulls from her African roots, where women and earth are celebrated with elegance, grandeur, luxurious curves; they are brazen and bold. Her glorious imagination comes to life on paper and Mylar.   Our “stories” are different, but I connected to her collaged imagery of distorted, surreal bodies- part human, part animal and part machine; backgrounds are embellished with fine brushstrokes of watercolor. The reconfigured female bodies might have animal printed skins and motorcycle wheels in place of feet. Tendrils of dreaded hair appear like dancing earthworms or like vibrating talons of a rooster.  (This is my imagination speaking.) The reference to Hannah Hoch would be a natural one, but she claims a stronger alliance with Romare Bearden, a pioneer for African American art whose depictions of the south and of Harlem are colorfully painted and collaged.  Perhaps it is his attention to the basic struggles of oppressed people to which Mutu connects.  As for the more obvious similarities that I, and others, may see in Hannah Hoch’s collages, in faces with cut out eyes stuck into primitive masks, they are apparently nothing   more than that. 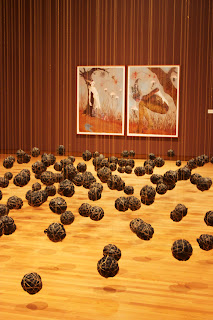 Wangechi Mutu’s sculptures are a mixed bag. (No pun intended there.) The plastic bags rolled into makeshift balls and held together by twine, reference what young children from her country sometimes use to play sports. They hang en masse from gold thread giving them a kind of preciousness.  The tree trunk- like pieces made from felt blankets, call our attention to a divide between developed and third world countries. In prosperous countries, these blankets are used for moving furniture. In Nairobi, they are often used by less wealthy people as blankets to keep warm. Packing tape is used to outline the bases of the sculptural “trees”, the tree being also an important feminine symbol. I didn’t love them, but I appreciated her point.  They are unavoidably ominous, strange and powerful, not unlike her collages.