Modernism is so associated with abstraction that the term "abstract art" is sometimes used as a synonym.  The most celebrated modernist movements, cubism, futurism, and expressionism, all abstracted away from retinal realism.  Other movements, such as constructivism, suprematism, vorticism, bauhaus, and de stijl pushed this even further, experimenting with pure abstraction, devoid of representational significance.  Abstraction is now back in vogue, as evidenced by a recent show at the Saatchi Gallery, so it unsurprising that the Museum of Modern Art elected to mount a show tracing the its origins.  Inventing Abstraction is massive, spanning what may be the most inventive fifteen years in the history of Western Art. 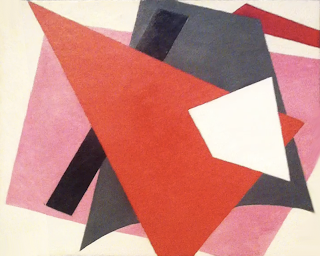 Not every experiment in this period was successful, as the show dutifully reminds us, but the failures are often interesting, and it is nice to see them pulled out of the archives.  Even more welcome is the inclusion of artists who have failed to become household names, despite producing outstanding and important work.  Among them a number of women, reminding us that modernism ushered in new opportunities for women artists.  The image at the top of this blog is a painted metal sculpture by Katarzyna Korbo.  Korba was Riga reared, Russian trained, and final settled in Poland.  Though classified as a suprematist, this work also anticipates the minimalist sculptures of Judd and Lewitt.  The MoMA show also profiles Lyubov Popova, a more doctrinaire Russian suprematist.  The handsome piece to the left has been chosen for the front page of the museum's impressive web site.  They also hosted a huge Popova retrospective a couple decades back, which helped to establish her as the artist equal of Malevich, the more famous male pioneer of the movement. 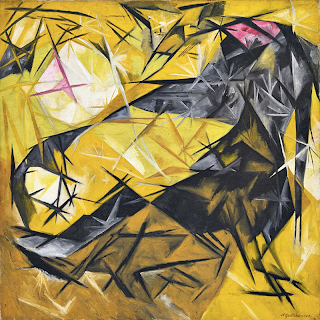 The show also draws attention to another artist from Russia, Natalia Goncharova.  As the painting on the right illustrates, he style is more futurist than suprematist.  But, unlike the Italians, who innovated the idiom, Goncharova's work is more purely abstract.  One would be hard pressed to discern that this painting depicts cats.  Goncharava is also less concerned with capturing movement than the Italians.  Indeed, her aesthetic inspiration was the recently invented x-ray.  She called her style rayism.  The museum should be applauded from bringing this boutique movement into the limelight.  Taking inspiration from technology is a central part of the modernist ethos, and the evocation here of a medical technology brings to mind more recent explorations in art, which explore medical imagery (think of Damien Hirt's anatomical models, for example). 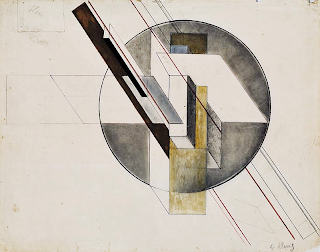 The exhibition reminds us that modernism was an international occurance.  Abstract art quickly came into vogue throughout Europe, West and East.  The museum traces the links between movements with a helpful diagram of interconnections (see the web version).  The advents of photographic reproduction, new modes of transport, and exhibition spaces increased the flow of ideas.  As the diagram makes clear, geographically proximate groups were in greater communication, leading to a constellation of coherent stylistic movements.  We find, for example, Gustav Klutsis creating architectural illustrations (left) that could easily be examples of El Lissitzky's method, which he called proun, also on display in the show. 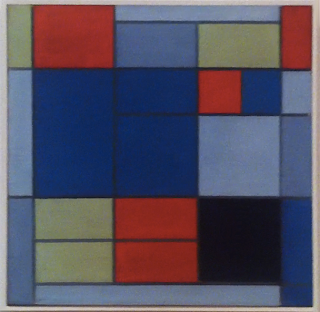 In Western Europe, modernist abstraction took on somewhat different forms, such as futurism, mentioned above, cubism, and de stijl.  The latter is well represented in the show. There are a number of impressive Mondrians, like the one on the right. Mondrian had not yet moved to pure primaries.  He allows himself three shades of blue, resisting the more purist distillation that would soon some.  Still the work is radical.  The gulf between these grid paintings and the early Braque/Picasso cubist canvases is enormous.  This is the logical culmination of Cezanne's fractionation.  Painting has been turned into a period table of artistic elements.  The show confirms that Mondrian was not alone in his exploration of formal essentialism (encapsulating a recent de stijl retrospective at the Pompidou).  For example, there are works by fellow traveler Theo van Doesberg, including his stepwise abstraction of a cow.  Two panels are reproduced below, courtesy of the MoMA image archive. 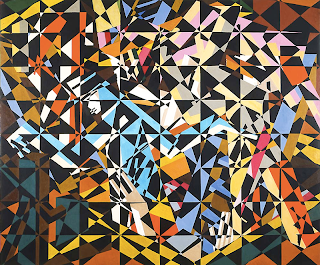 Moving closer to home, the exhibit also shows us expressions of abstraction in the Anglophone world.  There are strong, if forgettable, paintings by Americans, Marsden Hartley and Arthur Dove, for example, as well as abstract photos by Paul Strand.  England is represented by a collection of works from the Bloomsbury group, including pure abstractions by Vanessa Bell, and some choice examples of vorticism, which has gained attention lately.  Especially impressive is a huge angular canvas by David Bomberg (left).  This is one of the most contemporary looking works on display. 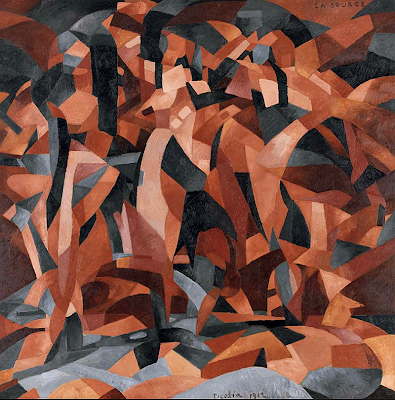 The show also reminds viewers that abstraction was a factor in movements that are more associated with other forms of invention.  For example, members of various dada movements have important cameos.  Several works by Marcel Duchamp are on view (including his Network of Stoppages, which, I will argue in a future blog, is among the most important paintings of the 20th century).  There is also an enormous and lovely example of Francis Picabia's early abstract work (right).  Picabia's abstractions are almost painfully aesthetic.  It is hard to believe that the same artist would be creating painting based on mechanical diagrams within a few years.  But it also makes sense.  The move from organic forms to machines in central to the project of early abstract art.


Exemplifying this intersection, the show includes an impressive painting by Duchamp's sister, Susanne (below left).  The spoke-like forms at the center evoke Marcel's bicycle wheel, but the title invites a different impression.  Called Funnel of Solitude, the image is a conceptual merger of machine (the funnel) and mind (solitude suggests a psychological state).  The painting is a kind of vortex that sucks viewers into to its black core. 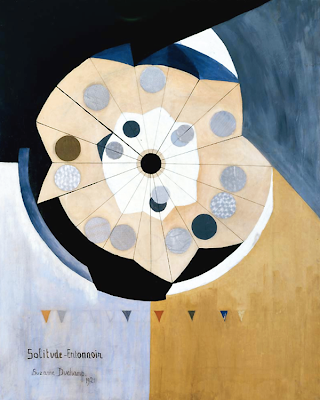 The exhibit gives an even more prominent place to another woman in the orbit of dada, Sophie Taeuber-Arp.  Spouse and collaborator of Jean Arp, Sophie gets my vote as one of the most interesting artists of the early 20th century.  Her modes of expression were highly varied.  She made clothing and marionettes (not on display), as well as functional art (some bowls and containers are included in the exhibit).  Her two-dimensional works spanned a range of styles, that exemplify various modes of abstraction.  For example, she produced some exceptionally good examples of de stijl.  The show presents some of her more extreme abstract works, including a collaboration with Jean Arp, which is described as one of the first grid painting (below left).  It is also an experiment in mechanical production (the elements were cut on a cutting board) and chance (the method of arrangement was partially accidental).  It anticipates both conceptual art and minimalism.  The work on the right is equally interesting.  Here Taeuber-Arp continues to explore grids but changes her medium from paper to colored thread.  The picture is woven together, rather than pasted or painted, making it an early example of fiber art.  Taeuber-Arp was decades ahead of the curve in her efforts to elevate craft media into fine art. 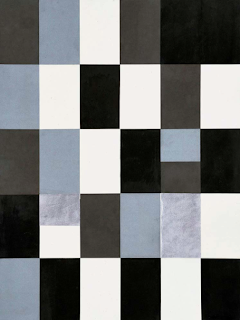 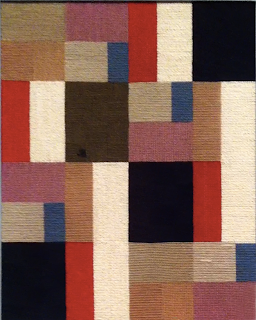 Lets turn finally to the titular question of the show.  Who actually invented abstraction?  Who was the first to break away from representation completely?  Here answers will vary.  The textbook answer is Kandinsky, who is unsurprisingly given a prominent place at the start of the exhibition.  Other pioneers are also presented, however, including a lovely group of paintings by the Bohemian artist, Frantisek Kupka.  In one, a portrait of his spouse, we see a face nestled in a sea of colorful vertical brushstrokes.  In the others, the representational element is removed, and we find only the brushstrokes, making these some of the earliest examples or pure abstraction (circa 1910). 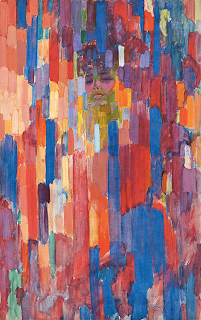 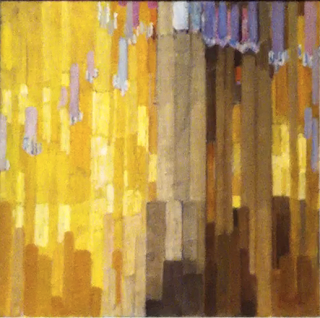 The search for an inventor may be moot, however, since abstraction was clearly in the air.  The rapidity of its spread and the extraordinary variety of forms in which it found expression testifies to an artworld eager to break from the confines of mimetic imitation.  The story of how abstraction came into being is almost too familiar to recount.  Its arrival seems inevitable in hindsight, after the transition from Cezanne to cubism.  Of course, abstraction did not need to be invented.  It was always already there.  In  body-paint and adornments, in textiles and architecture, in Islamic decorative motifs and Paleolithic rock carvings, and even in the palette and formal structure of representational paintings.  Abstraction was not so much invented in 1910 as exposed.  The frenzy with which it overtook the artworld was partially a function of the cult of the new, which is central to modernism, but it can be equally understood as fueled by an insight so basic that it could not be ignored.  Once noticed, it becomes glaringly obvious that all art is, at some level, abstract.