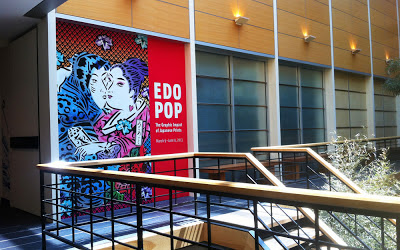 The Japan Society is in the final week of its exhibition, Edo Pop, which explores in the influence of ukiyo-e prints on contemporary art.  The show was co-currated by the Minneapolis Institute of Arts, and the classic prints on display are borrowed from its impressive holdings.  In addition, there are works by ten contemporary artists, from Japan, England, Scotland, the United States, and even a Belgium-based artist from Guadeloupe. The juxtapositions are inevitably unfair to these contemporaries, since the older prints are often so spectacular that their latter day heirs cannot compare.  Still, it is exciting to see the enduring influence of ukiyo-e and it is refreshing to see contemporary artists who draw on Japanese sources without taking their cues from anime and modern manga. 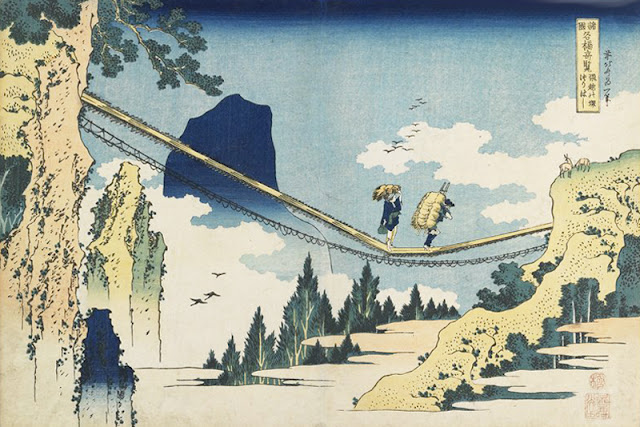 The term ukiyo-e means images of a floating world.  Originating in the 17th century, these prints were mass produced for ordinary consumers, and they depicted the theater personalities, courtesans, mythic tales, landscapes, and the vicissitudes of daily life.  Edo Pop focuses on the final phase of ukiyo-e production, in the 19th century.  The most impressive works are by Hokusai and Hiroshige.  Hiroshige owes a debt to Hokusai, whose work is said to have prompted his own pursuit of art.  A gorgeous Hokusai, in yellow and blue, is shown above.

The show is not thematically unified, though several motifs recur.  Among the nature pictures, we see the compulsory Hokusai waves and (above) views of Mount Fuji.  An even more striking, technicolor mountain by Hiroshige is shown below. 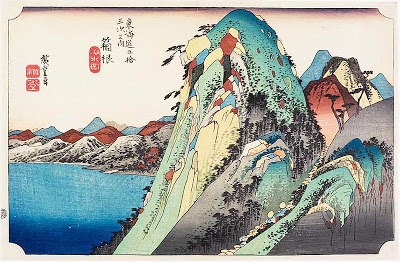 There are also some striking efforts to depict the rain by Hiroshige.  The best of these has a rhythmic echoing of form that anticipates futurists, like Balla. 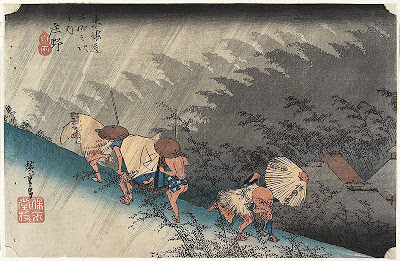 In addition, there are images of birds, tigers, and other creatures.  I was especially drawn to two fish prints, one by Hiroshige and and another by Kuniyoshi.  Both were students of Utagawa Toyokuni, as was Kunisada, whose work is also on display.  They all took on the surname Utagawa, which can cause some confusion. 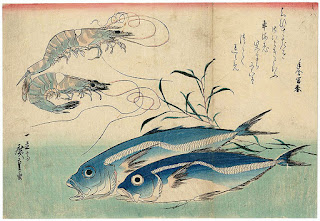 The exhibit also includes the usual host of actors, courtesans, geisha, and  beautiful people ("bijniga").  There are is even a female impersonator and a male prostitute.  Images of actors and courtesans were banned in the mid 19th century, along with the Tenpo economic reforms.  Forty years earlier, Utamaro, created the image below, called Love for a Farmer's Wife.  Utamaro was famed for his bijinga images, as well as his womanizing, as suggested by Mizoguchi's film Five Women Around Utamaro. 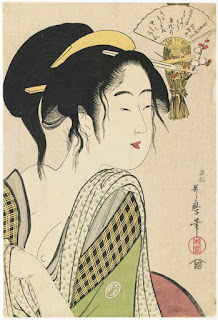 Some of the prints in the show have supernatural themes.  Here is a demon by Hokusai, and a group of supernatural foxes gathering by a shrine at New Year's emitting small red flames. 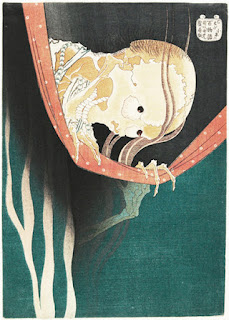 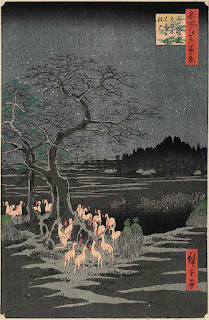 There is an amusing Hokusai showing a worm-like spirit, whose body consists of dinner plates woven together by hair.  Apparently this depicts the legend of a servant who became a ghost after being thrown into a well for breaking a precious piece of china.  The image is remarkably reminiscent the smoking caterpillar in Alice's Adventure's in Wonderland. 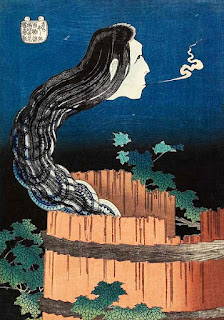 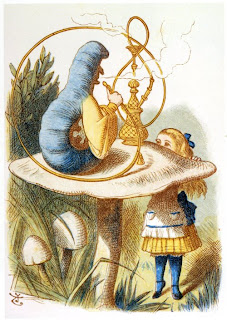 Other curious include a image by Hokusai of dancing children dressed too look like vegetation, and some instructions for making shadow puppets by Hiroshige. 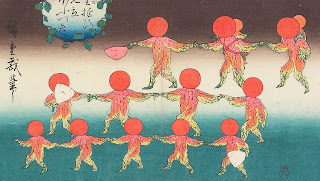 Such images show the diversity and invention of traditional ukiyo-e prints.  Sadly, the tradition died out in the 19th century, though it was occasionally revisited in the 20th century by artists such as Ito Shinsui and Hasui Kawase.  Edo Pop does not include these figures.  It jumps ahead to the present, and presents an impressive range recent of ukiyo-e inspirations.

Most orthodox in technique is Masami Teroka, who has been making prints using traditional methods for decades.  At a quick glance, these might be mistaken for old prints, but a closer glance reveals modern themes.  One shows a tattooed woman slurping noodles in the foreground, while a geisha clutches a McDonalds hamburger in the background.  Another shows a kimono clad maiden licking ice cream. 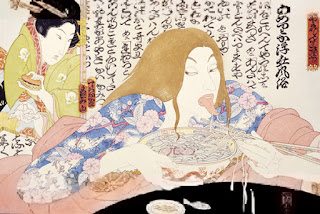 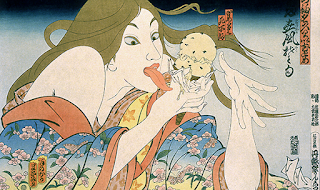 Other artists depart from the ukiyo-e aesthetic a bit more: A Brooklyn-based Japanese tattoo artist, named Aiko designed the entry art for the show (top); a Scott named Paul Binnie makes prints, like the weeping woman below, that are true hybrids between Western and Eastern styles; Narahashi Asko, of Tokyo, took the below seascape photo, which pays homage to Hokusai's Fuji prints. 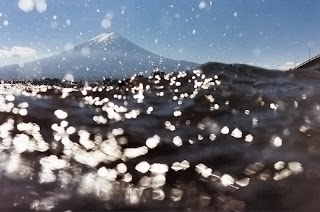 There are other works in mixed media, paint, and a series of computer generated images, by London's Emily Allchurch, printed on glowing lightboxes.  These artists are drawing on ukiyo-e in inventive ways, and their presence in the exhibition serves as a reminder that great traditions in art need never die.  The greatest gift of Edo Pop, however, is the Edo side, rather than the Pop side.  The classic prints are often reproduced, but seeing them up close is a special thrill.  The prints were made as mass art, and, to that extent disposable, but their value is certainly enduring.  Indeed, the best of these printmakers stand up to the best painters of Europe.  Hokusai's sense of color, line, and design is unsurpassed in the history of art.