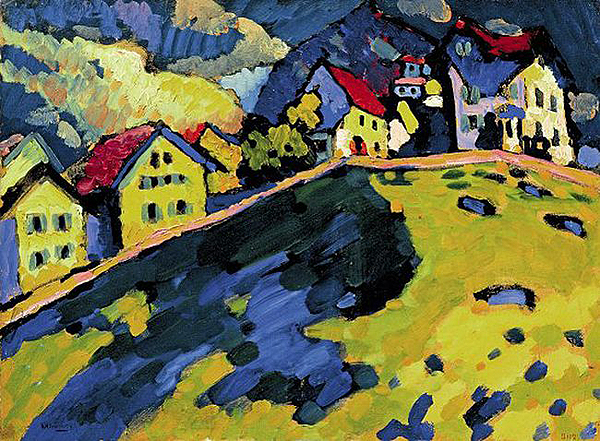 Okay, here's a confession.  I never really loved Kandinsky's paintings.  Don't get me wrong.  I appreciate Kandinsky very much as an artistic innovator and even as an author--his book on the spiritual in art has been an inspiration.  But many of the paintings for which he is most famous don't work for me.  There are, however, exceptions.  I'm drawn the the works that book-end his illustrious career.  His earliest experiments with abstraction between 1909 and 1912, and some of the biomorphic Bauhaus pieces and work he produced in France after the Bauhaus was closed.  A current show at the Royal Museum of Fine Art in Brussels, surveys the early effort, to considerable effect.  With many pictures borrowed from St. Petersburg's Russian Museum, and other collections, the show give Western European art audiences a look at some paintings that helped establish Kandinsky as a major pioneer of the avant garde.  The show also allows viewers to see how Kandisky's abstract works emerged from earlier efforts. 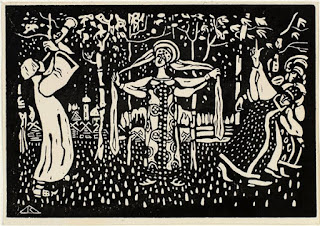 The thesis of the Brussels exhibition is implicit in the title, Kandinsky in Russia.  Kandinsky's aesthetic is deeply informed, viewers are instructed, by his emersion is Russian culture.  Icons, woven belts, and wooden doors are among the artifacts presented along side the artist's early efforts.  There are also numerous folk prints, showing scenes from legend and lore.  The case for the influence of these latter objects is easily made, for Kandinsky himself made folk woodcut prints before venturing into modernist painting.  The example above illustrates.  It also has elements recognizable in the artist's mature work: abstract patterns, musical lyricism, and a composition that is busy and detailed throughout. 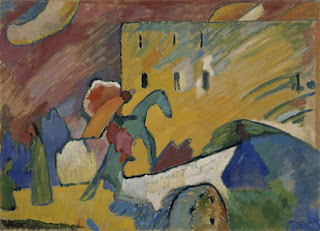 From these folk images, it is not hard to see how Kandinsky evolved towards his distinctive style.  The exhibition helps to trace the progression.  The image above is a folk scene, to be sure, but we see Kandinsky adopting a vivid pallet and reducing his figures to their underlying geometrical form.  The transition was fueled, no doubt, by Kandinsky's exposure to international art.  In the latter part of the century's first decade, Kandinsky was traveling across Europe, and he ultimately settled in Murnau, Germany, where he produced painting like the one at the start of this post.  Fauvism and post-impressionism are clearly exerting there influence, and Kandinsky fell in with the German expressionists who were busily re-defining art.  The charming image above is a great example of Kandinsky cross-over art: expressionism meets Russian folk art.  By coincidence, a nearly identical study for the same picture sold at Christie's for over 21 million dollars the day before I was in Brussels (below). 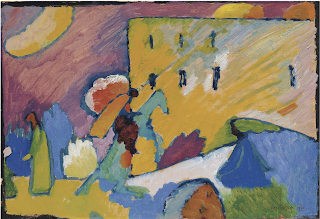 These works were painted in 1909, and at that time Kandinsky began using the term Improvisation to name his paintings.  He borrowed in from music, which was an important inspiration.  Kandinsky was a synesthete.  He associated colors and shapes with sounds.  So, he could see painted images as musical.  That is a key to understanding his move towards abstraction.  Non-vocal music is abstract.  It (often) doesn't represent anything in the world, and this in no way diminishes it's aesthetic interest or value.  So, if paintings are like musical works, and music is abstract, then paintings can be abstract too.  Representational content become unnecessary. 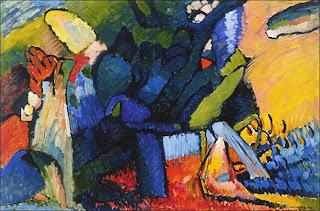 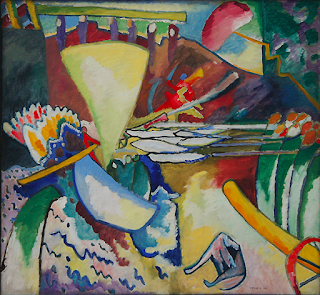 In two marvelous 1909 paintings (above), we can see Kandinsky moving towards abstraction more completely.  Though he is not yet there--note the dog in the lower right, for example.  It would take another two years before Kandinsky allowed himself to completely abandon representational content. 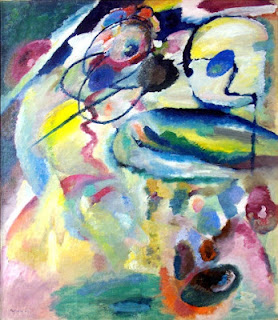 The exhibition does not leave views trapped in pre-abstraction limbo, of course.  It includes many abstractions, including his "Painting with a White Circle," from 1911 (above), which rarely leaves its home in Tibilsi.  Kandinsky considers this ghastly and imbalanced canvas his first truly abstract work. 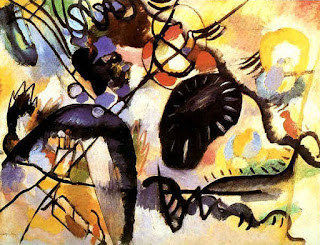 More appealing is the the black spot painting above.  Having been primed by the earlier folk paintings, it is hard no to see this one as a village scene.  The horizontal black line towards the bottom can be interpreted as the horizon, with buildings on the left, a mountain on the right, and a yellow sun hovering above that.  The rest is a kind of Rorschach test to be reinvented by each viewer. 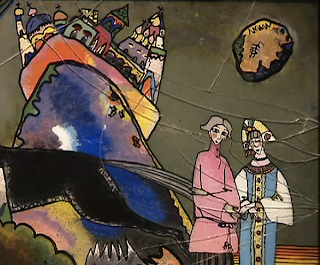 Interestingly, Kandinsky did not abandon representation after his move to pure abstraction.  He even returned to folk painting from time to time.  The show includes a series of paintings of glass (see detail above) that look like typical Kandinsky abstractions if you squint, but look more like kitschy outsider art when viewed normally.  The use of glass also reminds one of Duchamp's Bride Stripped Bare, and like that masterpeice, Kandinsky's glassworks happen to be cracked.  The irony here is that Duchamp's use of glass was intended as a leap forward beyond traditional painting and sculpture and into the brave new world of conceptual art, whereas for Kandinsky, painting on glass serves as another indication that the heralded modernist was really a recidivist operating at the intersection between art and craft. The show's strongest visual arguments for its core thesis that Kandisnky was heavily influenced by traditional Russian art consists in the pair of painting above.  On the left, we see a classic iconic depiction of St. George killing the dragon.  The right looks like a case of pure abstraction.  The title?  St. George!  Suddenly the yellow streak becomes a lance or spear, the orange form becomes a knight, and the blue becomes a horse, with black hind legs.  It's a lovely case of top-down perception, were knowledge can transform what we see.  The exercise reveal Kandinsky to be less of an abstract painter than he is often to be, and more of a folk artist who distilled the images of his early life and transformed them into musical improvisations of color and form. 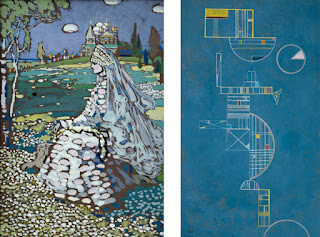 In this light, we can revisit the textbook claim that Kandinsky was the first modernist artist to create pure abstractions.  That thesis can be challenge on many grounds, and there is now clear evidence that he was beat out by an unsung Swedish artist, Hilma af Klint, who was making abstract modernist paintings as early as 1906, when Kandinsky was still making folksy woodcuts.  It's tempting to say that Kandinsky was never an abstract painter, and perhaps never fully a modernist.  Even his most geometric works, like the "Flowering" from 1930 (above right), resemble his folk images, like the "Bride" from 1903 (above left)--a juxtaposition not on display in Brussels.  The bride theme again brings Duchamp to mind, and it tempting to see the geometric abstraction on the left as continuous with the mechanical elements in Duchamp's Bride Stripped Bare.  But the contrast may be greater than the similarities.  Where as Duchamp is poking fun at abstraction, at aestheticism, and at romance, Kandinsky is exemplifying all these things.  His strides forward in art turn out to be nostalgic glances backward.  The exhibition in Brussels does a great service by presenting the artist's Russian roots, and we are left wondering whether he ever really left Russian behind.