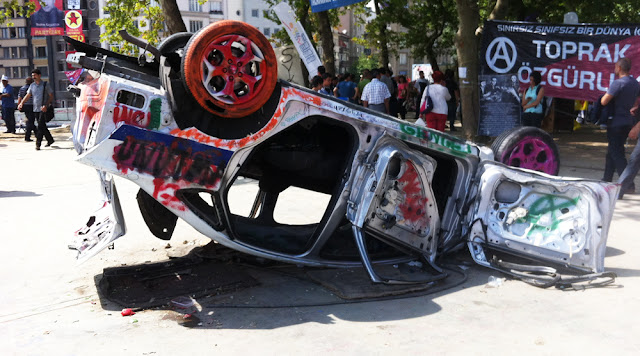 Just returned from Istanbul, where artbouillon visited Taksim Square and the adjoining Gezi Park, cites of a major protest against the government of Prime Minister Tayyip Edorgan in Turkey.  The protest began when Erdogan announced plans to converted this area (some of the only greenery in central Istanbul) into a complex that would include a shopping center, a mosque, and building paying tribute to the historic triumphs of the Ottomans.  Protestors occupied the park as demolition began, and then police tried to forcibly remove them with tear gas, water canons, and mass arrests.  This led to riots throughout the country.  Thousands took back Taksim and Gezi, where they remain, celebrating all night.  There has been extensive political vandalism and, amidst all that, some striking spontaneous art, both intentional and inadvertent.  The painted wheels on the overturned car above, go beyond political messages, and turn this remnant of violence into an objet d'art. 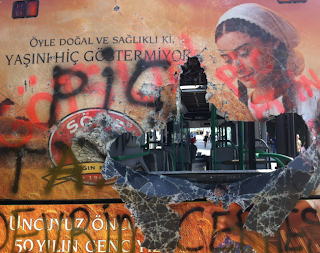 Several buses have also been vandalized, and used as barricades to slow down police should they try to assault the occupiers again.  Graffiti-covered and gutted, these have become interactive installations, which any one can enter.  The back of one has an advertisement that has been shattered in what amounts an an anti-capitalist version of pop art. 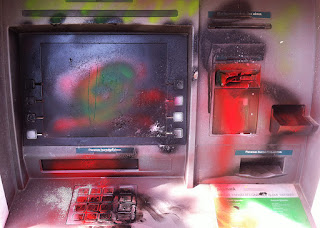 More overtly anti-capitalist are several ATM machines that have been painted and rendered dysfunctional.  This one has an ugly color scheme, but the neon hues add irony to what is otherwise an anti-aesthetic act of defilement and defiance. 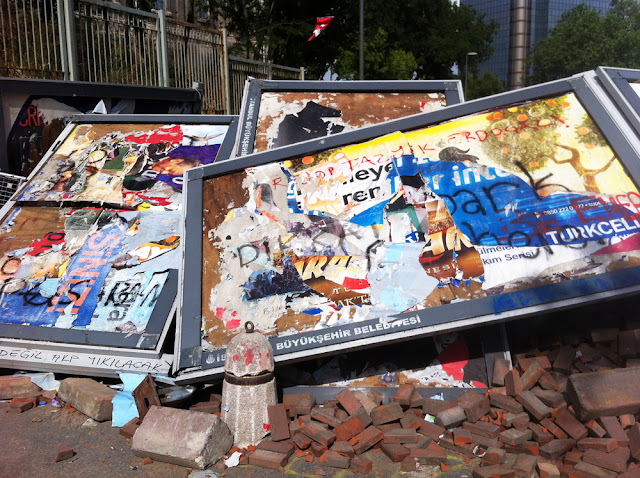 Much greater aesthetic value can be found the the defaced bilboards.  This deconstructed tryptic brings the work of Jacques Villeglé and Raymond Hains to a new level.  Equally impressive was the accidental masterpiece below: 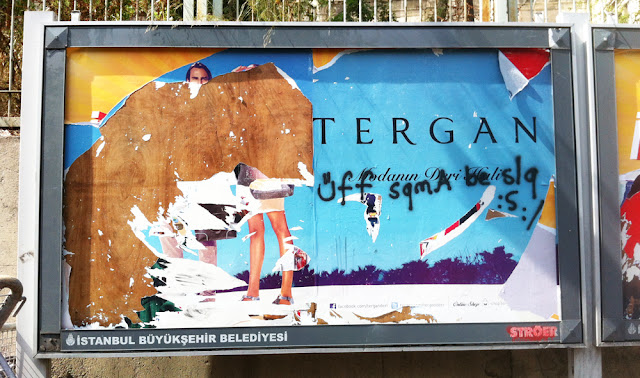 Anarchism and nihilism are expressed throughout Gezi.  This unsubtle message says it all: 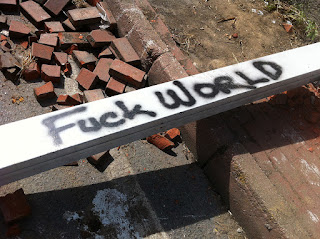 Bricks are also everywhere.  Brick paves streets have been dug up in some places to use as supplies for making barricades.  The strewn remains of those efforts create interesting patterns, like a Carl Andre piece after a storm. 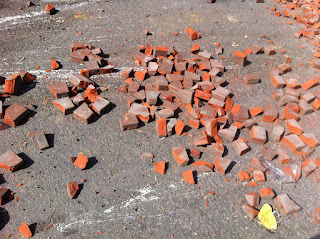 In addition to cars and buses, some work vehicles have been vandalized.  Some of these were used to start the park demolition and were commandeered by protestors.  Their enormous iron shovels have been transformed into urban polychrome sculptures. 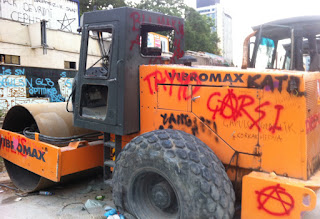 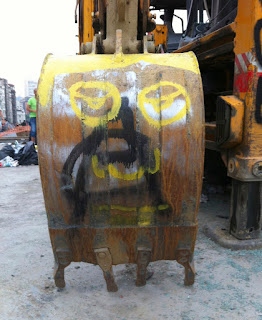 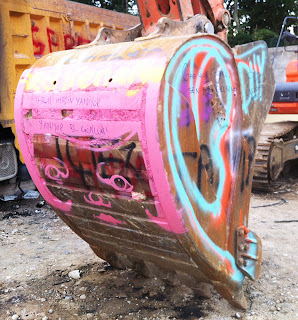 All these examples come from Gezi and Taksim, but there are also interesting examples of vandal art throughout the city.  Farther afield, the sublimely enhanced construction sign below was close to the Blue Mosque, one of Istanbul's most famous sites, in a more conservative part of the city.  I'm not sure whether these enhancements antedate the events at Gezi. 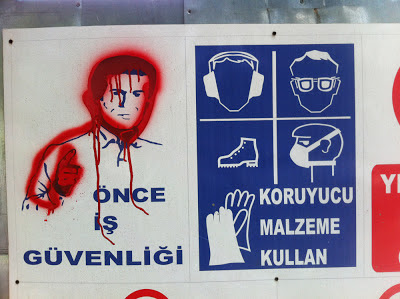 The Gezi protestors often use images of Atatürk, the leader who modernized Turkey.   Flags, posters, and t-shirts with his image abound.  Ironically Atatürk is also used as a symbol by Erdogan.  Both sides claim to be he heirs to his vision of a progressive, powerful, and secular nation.  Images of Atatürk can also be found in the streets.  This portrait, on a street that leads to Taksim, shows him as a mature statesman. 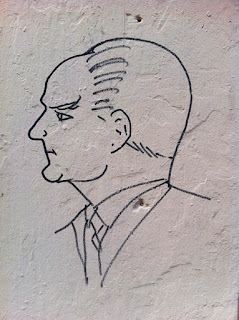 Best of all was this double portrait, showing Atatürk in his military days, set against a minimalist background.  Appropriate because there are many Atatürks in Turkish public discourse--hero to many sides, each version corresponds to a different conception of how the past indicates a path to the future. 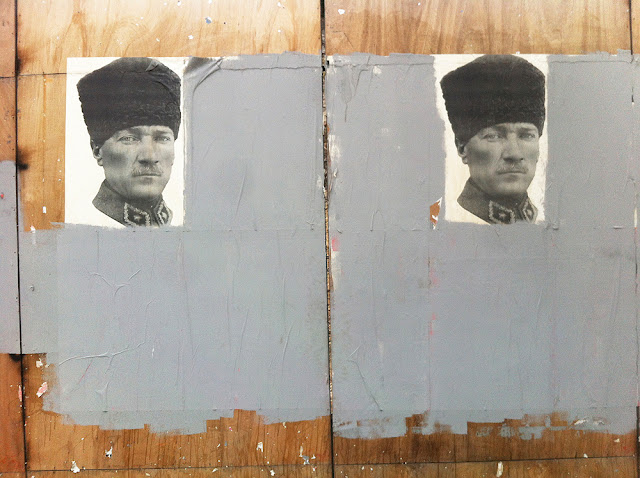 [I dedicate this blog entry to the protestors who are fighting against totalitarian rule in Turkey, including those who have been injured on imprisoned.  Protest art expresses the spirit of hope that motivates and pervades the movement.]
Posted by Jesse Prinz