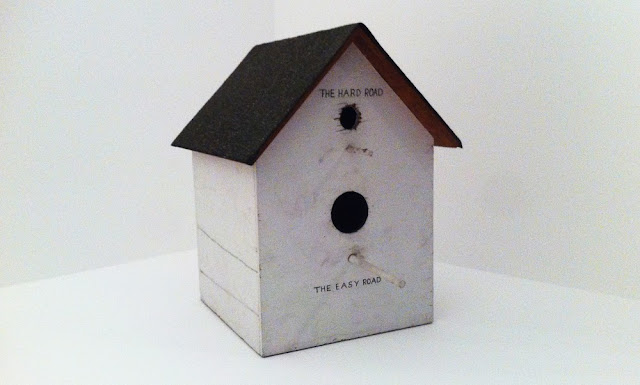 Last year, Mike Kelley committed suicide in his South Pasadena home.  The reasons are open to interpretation.  Recent deaths in his family, a break-up, a bad review, and excessive drinking have all been cited at precipitating conditions.  Whatever the cause, the effect is clear: the art world lost one of its most articulate and original voices, whose work remained as vital and relevant as ever after four decades of production.  His legacy is being celebrated at a Pompidou retrospective, which spans from his student days, like the bird house above, to some of his most recent obsessions. 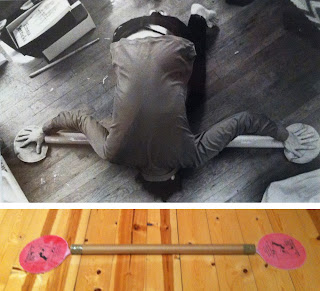 It's difficult to summarize Kelley's work, since it spans numerous media, and lacks a unifying style or theme.  But there are threads that run through.  Kelley has been described as the logical continuation of pop art.  More accurately, one might describe Kelley as a post-pop artist with a punk sensibility.  Whereas Warhol delivers an apotheosis of brands and celebrities, Kelley presents a more sordid perspective on life in a consumer society.  His iconography gestures at horror,  porn, underground comics, and other schlocky modes of expression. There are also references to societal threats such as drugs, religion, and child abuse.  This gives the work a sense of tackiness and trauma, delivered with scatophilic sensibility.   Kelley's sense of humor, which is everywhere in evidence, spans from unabashed absurdity (as in the whoopee cushion piece above) to kitschy creepiness. 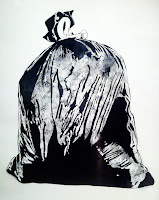 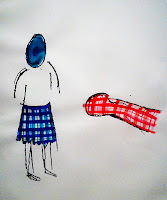 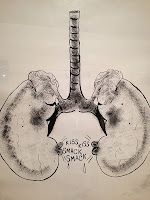 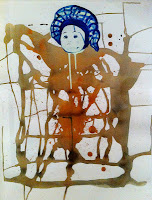 The Paris exhibition includes a large number of Kelley's graphic works, which offer a good introduction to his personality.  We find a plaid phallus approaching a figure in a plaid skirt, a bloated trash bag, and human organs kissing.  There is also a sickening brown paint splatter, which has been transformed into a portrait of a baby.  This can be read as a slight against abstract expressionism, which Kelley held in contempt.  His distaste derived from over-exposure in art school and his recognition that New York exerts hegemonic control over the art world, dictating which masters matter most.  In a terrific interview, Kelley complains about New York art experts trumping up artists like Jeff Koons and dismissing Dali, whose late works he regarded as the cine qua non for both Koons and Warhol.

Kelley's attitudes towards New York's art pantheon are also reflected in a couple of monumental canvases encrusted with consume jewelry, toys, and trinkets from the 1980s.  From afar, these might be mistaken for abstract expressionist works (see image above), but up close they are clusters of junk (see detail below). 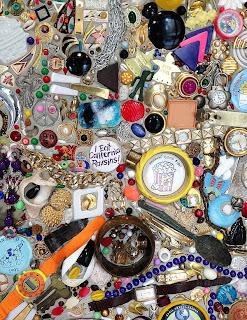 Given Kelley's disenchantment with the New York art world and the fact that he was trained and based in California makes it tempting to classify him as a West Coast artist.  In fact, he'd be better classified as a Michigan artist.  Born in Detroit, Kelley's work makes frequent reference to the Middle American world in which he was raised.   This is most apparent in his reproductions of his high school, including a charmingly labeled diagram and a metal reconstruction (below). 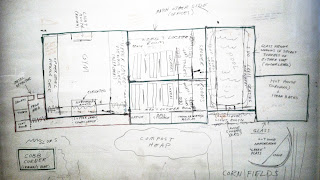 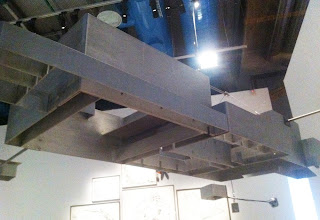 Even more obsessive is his scale model of every school he ever attended, including CalArts, which gets domesticated when contextualized with Michigan schools as if to say that Kelley's true art roots began back home (below).  This kind of nostalgia is overtly ironic.  For example, we find Kelley carefully labeling his high school's athletic facilities implying a jock persona, when in fact he was a nerdish bookworm and art enthusiast, despite his parents' protestations. 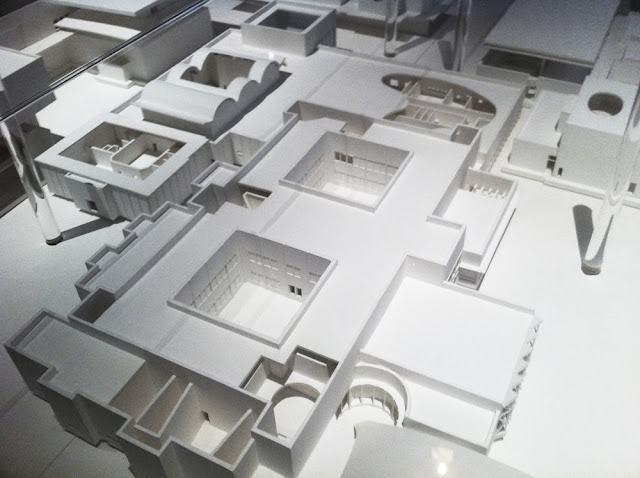 Michigan wasn't a bad place to come up in the arts.  Kelley managed to find other avant grade outsiders, including the world's most important proto-punk music scene.  Kelley's involvement with music was deep.  He was part of an important noise band along with alumni from the MC5 and the Stooges, named  Destroy All Monsters, after a B-Movie.

Kelley was also a long time collaborator with Sonic Youth.  Interviews that he conducted with Thurston Moore and Kim Gordon are included in the Pompidou exposition.  There is also a series of photos he made of handmade dolls on display, one of which served as the cover for the Sonic Youth album, Dirty. 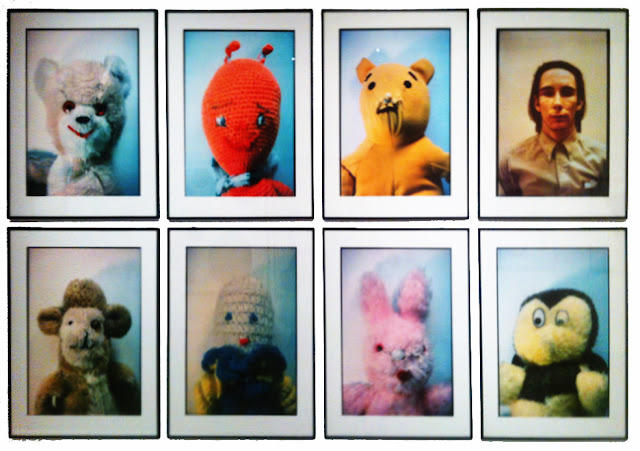 Kelley collaborated with other artists as well.  The show includes some enjoyable projects with his classmate Tony Ourseler.  Ourseler's trademark projections combine nicely with bulbous constructions that reflect Kelley's aesthetic. 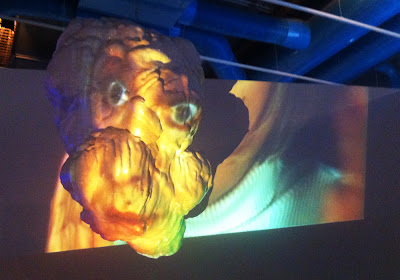 The show also includes a famous film collaboration with Paul McCarthy, another master of uncomfortable themes.  The film is based loosely on a 19th century novel about a young girl called Heidi.  It's performers wear rubber masks and they engage in a series of obscure interactions with their own doubles. 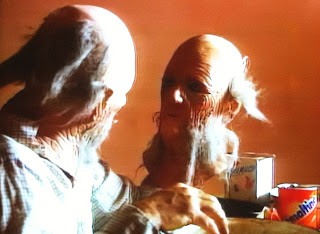 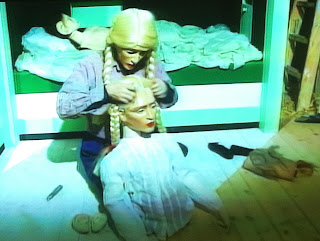 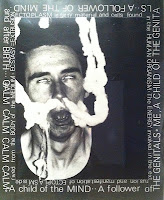 Kelley's work is not easy viewing.  It is often ugly and uncomfortable.  But this is what makes it so relevant.  In an art world dominated by corporate collectors, it is refreshing to see work that people might be reluctant to display in their homes. Kelley's most adoring fans included people like John Waters who recognized in Kelley another crusader against convention--someone in love with pop culture but also insightful enough to see that the imagery around us is also an indictment, revealing our vulnerability and our vulgarity.  Kelley's keen eye for these base features of humanity may have become a burden to him in the end. The exhibit is a window into a world we all inhabit, but rarely notice.  It's surely easier to endure with blinders on.

To facilitate the transition back into a rosier worldview, let me end with one if the sweeter items in the retrospective: a long stuffed snake assembled from discarded stuffed animals. The snake's front end is pink, pervy, canid, and cute, and then its body tapers off into an endless series of fuzzy multicolored, sausage-like extensions.  The odd object is a visual essay on innocence, which simultaneously alludes to original sin. Perhaps even sinister things have a cuddly side. 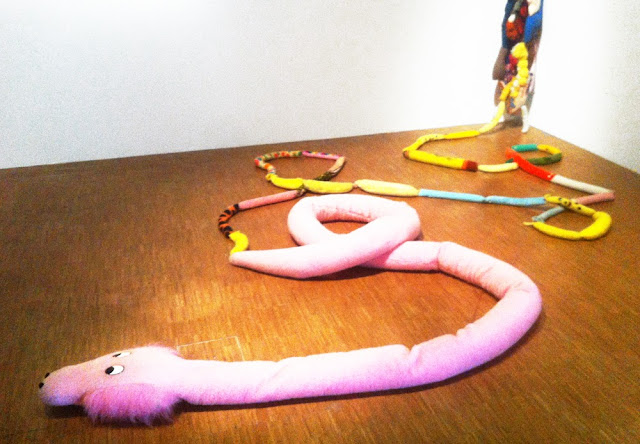