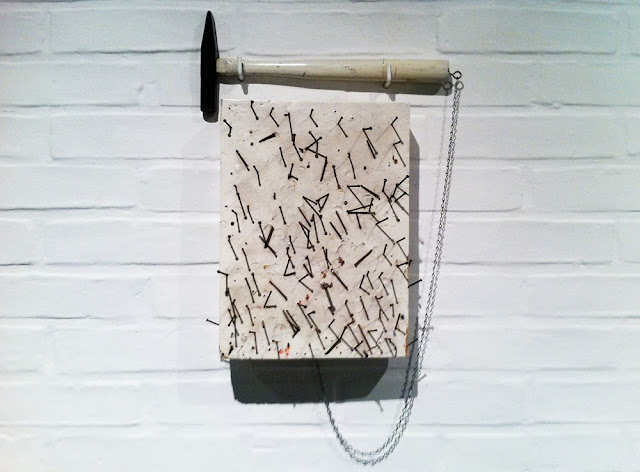 Like many people, I first heard of Yoko Ono as the woman who broke up the Beatles.  I also vividly recall people snickering about her records, saying she howled instead of singing.  In reality, Yoko Ono was a major figure in the 60s art scene, whose work contributed to conceptualism, happenings, fluxus, and video art.  She was also a musical pioneer, making recordings that forecast subsequent currents in punk, riot grrl feminism, lo-fi, art rock, and noise pop.  A grand retrospective at the Louisiana museum outside of Copenhagen offers an opportunity to appreciate her contributions to art. 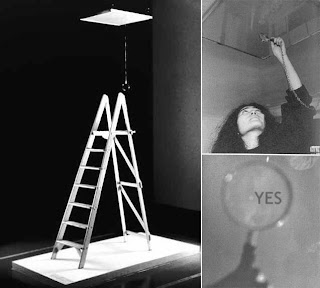 John Lennon apparently met Ono in 1966, at a London gallery, where she was installing a show.  He asked if he could hammer a nail into the hammer piece (top): a plane piece of wood, which gallery visitors could modify by hammering provided nails.  She said no.  Lennon also reports adoring Ono's ceiling piece (above, source): a ladder with a magnifying glass hanging above it, and the word "yes" in tiny letters on the ceiling.  The Lennon legacy has made the pieces so legendary that their artistic significance is almost forgotten.  That is a shame.  The hammer piece was a clever innovation.  Kurt Schwitters had hammered art together decades earlier, but this piece helped to re-write the relationship between artist and view.  The idea of artist as grand master is replaced with the idea of artist as someone who invites viewers to create.  The ceiling piece raises questions about the ontology of art.  Where is the piece?  Is it the ladder?  The word?  The activity of climbing and looking?  Are artworks beautiful things?  Do they have fixed meanings?

Like other pioneers of conceptualism (Weiner and Kosuth, for example), words have been a central part of Ono's practice.  Among her most celebrated works, are the pieces described in her book Grapefruit.  Each page contains an instruction, like the ones above, to engage in an activity.  Some of these activities are impossible to carry out.  They vary from charming, silly, and absurd, to poetic and profound.  Grapefruit is a monument in conceptual art.  They perfectly exemplify Sol Lewitt's precept that artworks are ideas, and that it doesn't matter whether they are (or can be) physically instantiated.  Lewitt's own works never realized that vision as well as Ono's.  Like her, he often created works in the form of instructions, but the products created by following these instructions remain fairly traditional, or, in Duchamp's phrase, retinal. 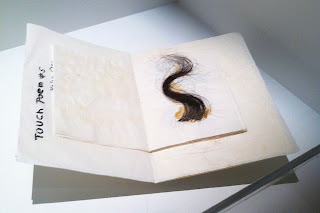 Ono's interest in the intersection of art and language is well represented in the Danish retrospective.  We find word pieces, mail art, and instructions of various kinds.  Words were important conceptualists because they moved beyond the the focus on the visual in art.  Ono goes beyond the visual in other ways as well.  There is for example, "touch poem" consisting of a lock of hair (above).  In another piece, visitors are invited to feel the air inside an plexiglass podium.  There is also a charm machine containing plastic containers containing nothing.  Emptiness is a preoccupation in Ono's work, and also in traditional Japanese aesthetics (consider the negative space of a Zen rock garden).  We are invited to ask, Is air really nothing?  Can something invisible be art?  Are concrete objects more valuable or meaningful than the ether that surrounds us? 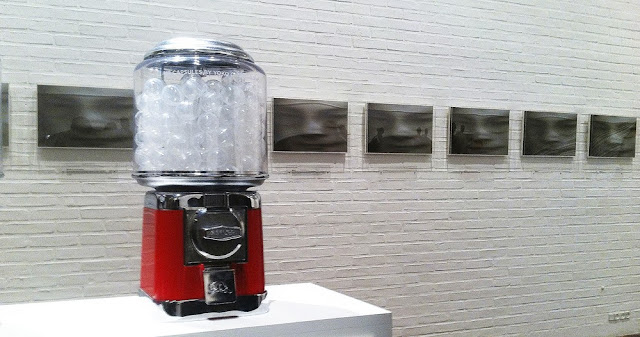 It is noteworthy, in this context, that Ono was a philosophy student, indeed the first woman in the philosophy department at her prestigious Japanese university.  She ended up dropping out, but her art can certainly be regarded as philosophy.  It is also political at times as well. 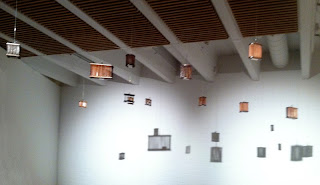 Behind the charm machine, in the photograph, there are a series of uniform images, and below each is an inscription describing a traumatic biographical event, such as a time when Ono was fondled by a doctor.  Ono also lived through the bombing of Tokyo at the end of WWII, and she was active in the peace movement and woman's movement of the late 1960s.  The exhibition is punctuated by political works, such as a suspended constellation of critic cages made to commemorate massacres (above). 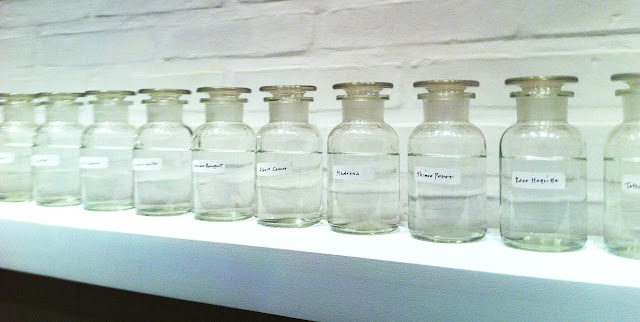 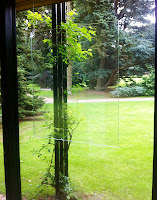 The exhibit focusses more, however, on Ono's Zen-infused conceptual works.  The image above is a detail of a long shelf containing water jars with the names of famous personages.  The list ranges from Picasso to Hitler.  Here we can see Camus next to Madonna.  The piece is a great equalizer.  For Ono, everyone is really just made of the same transparent ubiquitous stuff.  It is a political statement, but also a philosophical one.

The piece on the right is a clear panel, proportioned like a painting, engraved with the words, "Paining to let the evening light go through."  It asks, as Duchamp had done, about whether art is a window onto reality.  But it is also a celebration of natural beauty, and not just an intellectual joke.


The exhibit also does a good job highlighting Ono's work as a performance artist and video artist.  It includes her piece Four (a minimal fluxus name), which shows how buttocks move as people walk.  The image on the screen pays homage, in a witty way, to formal abstractionists, like Malevich.  The photo below captures the film in production. 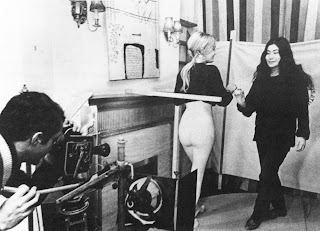 Even more famous is Ono's Cut Piece, in which spectators are invited to snip off her clothing.  This concept anticipates Abramavic among others, and is a landmark in the history of performance art.  It is also an important feminist work, drawing attention well before the Guerrilla Girls, to the sexualization of women in Western visual culture.

Another interesting example, which also deals with the female body, is Fly: here a fly, which became Ono's alter ego, moves along a naked woman's body.  It brings to mind the custom of including flies in Dutch still like paintings, to represent the impermanence of beauty.

The fly film also related to Ono's musical work.  Around the same time, she began making musical records.  She had been involved in music for a decade already, and John Cage was an early mentor as she broke into the art scenes.  But, after joining forces with Lennon, Ono began producing commercial pop records.  Her first two were overtly, even aggressively avant garde -- more challenging than almost any other mass marketed music of the time.  The second record was called Fly, and an excerpt can be heard below.


The Louisiana show does not aim to present Ono's musical works, but this is an important omission.  In a way, Ono's visual art died when she met Lennon.  People blame her for destroying the Beatles, but the Beatles were already done.  Much more more profound was the effect that the Beatles had on Ono.  She was a major figure in the underground art scene before she met Lennon, but she later became redefined (and reviled) as Lennon's wife, and latter as his widow, rather than as a significant artist in her own right.  Ono has continued to make visual art in the decades since meeting Lennon, much of which is on display in the show.  Some this work is excellent (including the crickets and water pieces mentioned above), but her most important artworks precede her marriage, and her later work is often parasitic on earlier ideas.  Being married to rock's biggest celebrity may have altered her artistic trajectory, or, worse still, stifled artistic progress.  But she did continue to innovate in other ways, after marrying Lennon, and her greatest achievements were in music.


After Ono's two avant garde records, she records some material that was more accessible.  Her crowing achievement is the uneven but excellent double album, Approximately Infinite Universe.  The album varies stylistically, with a lot of blues, funk, and rock coming through with Lennon's (and occasionally Mick Jagger's) guitars.  But there is also a lot of experimentation here, and overtly feminist lyrics.  Some of the songs have a punk rock sensibility, like the stripped down number above.  Hearing this record, it is impossible not to think of Patti Smith, the X-Ray Spex (note the saxophone), Bikini Kill, and Deerhoof.  Decades of musical innovation are anticipated in these tracks, and hindsight has shown that Ono was well ahead of the curve.  She can be seen, in this light, as one of the major figures in recent music.   The Louisiana exhibition also properly confirms Ono's place as an important figure in the recent history of art.
Posted by Jesse Prinz