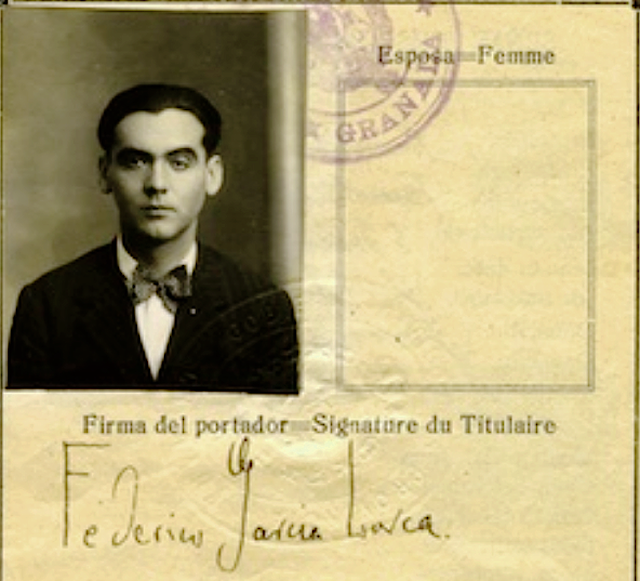 In 1929, after a falling out with Luis Buñuel and Salvador Dalí, Federico Garcia Lorca set sail for New York.   He planned to study English at Columbia University but soon gave up and devoted his time to writing a series of poems.  Lorca had never experienced a large urban environment, and he had never been overseas.  He was transfixed by New York's bold modernism, but also rattled by its racism and consumerism.  He witnessed the Stock Market crash and watched the teaming masses, once buoyant with optimism, collapse into panic and despair.  Lorca's time in New York would transform his poetic style.  He amassed a collection of poems that are among the finest of his career.  He delivered these to a publisher in 1936, several years after returning to Spain.  Lorca planned to visit his editor the following day, but never made it back.  Caught up in the Spanish Civil War, he was executed in Granada weeks later by a militia loyal to Franco.  The manuscript, called Poet In New York, would be published four years later in Mexico.   Most of the original materials, including Lorca's own illustrations for the collection, have been out of public view since then.  An exhibit at the New York Public Library, closing on July 20th, gives a rare glimpse. 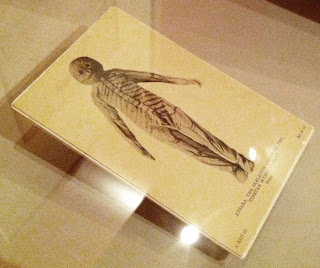 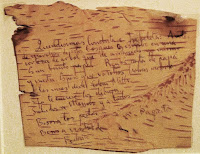 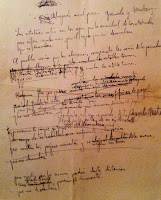 The exhibition includes Lorca's passport (top), a postcard he collected (above), letters he wrote to his family (above left), and manuscript pages (above right).  There is even a Columbia University library card.  These are fetish items, significant because they bring us into contact with one of the century's greatest poets.  More exciting are the drawings on display.  Lorca was an avid drawer.  He drew compulsively and joyfully.  While drawing, he said, "I love moments of intensity and purity that poetry does not give me" (source).  His friend Gregorio Pierto, a painter, said that "Lorca would do his drawings... as if playing, though with that seriousness that children adopt when they do their own, a childlike interest, like someone doing something of the utmost importance in his life" (source).  Miró said these drawings were manifestly the work of a poet, which he considered the ultimate complement.  Lorca also admired Miró, and one can see a similar playful in their art, and an appreciation of negative space. 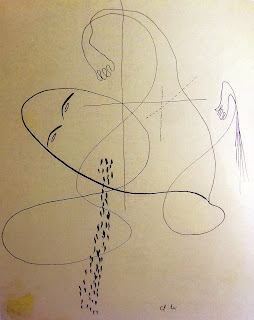 Lorca's drawings were ignored for many years, but several recent volumes have offered reproductions and commentary.  Some of the drawings on display at the library were originally created to illustrate Poet in New York, and some were published in an early edition.  Lorca often appears as a character in these works, reduced to a pair of heavy eyebrows and a tangle of delicate limbs. 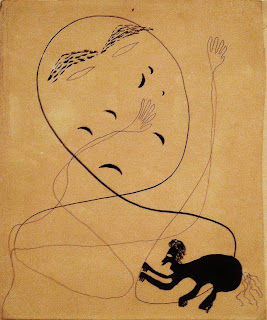 There are also fanciful creatures in the drawings, a feature typical of his New York poems as well.  Lorca's New York is infested with rats and reptiles.  There are also insects, farm animals, and many other writing and gurgling life forms.  Here is a representative passage:

One day
the horses will live in the saloons
and the enraged ants
will throw themselves on the yellow skies that take refuge in the eyes of cows. 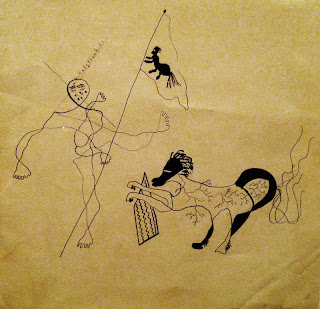 Lorca also had a fascination with spindly, vein-like nerves, which twist through the limbs of his creatures or dangle in the air like trees.  He tried to develop a "physiological aesthetics," inspired by textbooks in cytology and neurology.  Some of the works bring to mind the magnificent histological illustrations of Ramon-y-Cajal.  Winding lines also appear in the poetry:


It doesn't matter that each minute
a new child shakes his small bunches of veins
or that the newborn viper, let loose under the branches,
calms the blood-thirst of those who look at the nude.
What matters is this: void.  The world alone.  The river's mouth.

It would be overly adulatory to praise Lorca's drawings too much.  Some are wonderful, all are charming, but many have a disposable character.  They were doodles, flights of fancy, little whim-gifts to friends.  There is no doubt that Lorca's finest pictures are crafted with words.  None of his drawings can capture the visual intensity or invention of his New York poems.  No line of ink can compare to a line of his text.  Consider the uncompromising horror of this verbal image:

There were murmuring from the jungle of vomit
with the empty women, with hot wax children,
with fermented trees and tireless waiters
who serve platters of salt beneath harps of saliva.

Vomit is a  favorite trope in Lorca's poem cycle, along with urine, spit, and other forms of urban filth.  One almost feels sullied by his stanzas.  His drawings never quite reach that level of uncomfortable urgency, though they occasionally come close, like the following example: 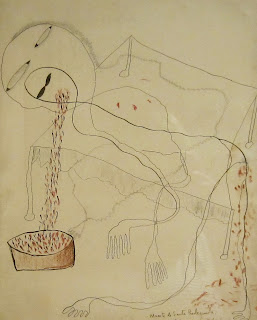 Though imperfect, Lorca's drawings leave us with an intriguing legacy.  They remind us that creative personalities often feel stifled by a single medium.  They also have a verbal quality.  By that, I mean they are filled with discrete and recurring symbols, like some ancient iconography waiting to be decoding.  Sometimes the cryptic messages hint at the inner torment Lorca might have felt during his time in New York.  He was a foreigner there, a linguistic visionary muted by poor English skills, an artist.  He spent time at Harlem night clubs watching black bands play for white audiences, feeling like a member of neither group.  He was a leftist in the hotbed of capitalism. a Flamenco balladeer in an urban jungle, a gay man in a country were homosexuality was still illegal.  (In this context, it is disheartening to note the blank space in the passport picture above, reserved, chauvinistically, for the carrier's spouse.)   Lorca's poetry often reflects the loneliness and anxiety associated with his predicament, and this sometimes comes through in his graphic work as well. 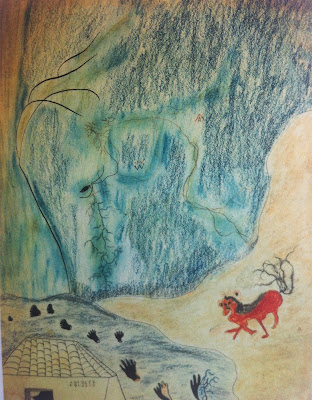 The above picture shows a path with what first look like footprints.  On closer scrutiny, however, it appears to be a trail of severed hands.  There is a sense of impending doom here, as if Lorca knew he would soon recede into the distance, violently, leaving his poetic and pictorial handiworks behind.  Lorca's capacity for augury is also poignantly present his poetry.  One of the New York poems contains the following lines, which describe his own demise.  I align the text with a detail from a contact sheet showing some of the last photos ever taken of the poet.  These photos were snapped by the Polish photojournalist, Chim, and on display at the Jewish Museum in Paris last month, in a heart-wrenching show about the Spanish Civil War.

When the pure forms sank
in the cri-cri of daisies,
I knew they had assassinated me.
They combed the cafes, cemeteries and churches,
they opened the wine-casks and closets,
destroyed three skeletons to take their gold teeth.
But they couldn’t find me.
They did not find me?
No. They did not find me.
But it was known the sixth moon fled above the torrent,
and the sea— suddenly!— remembered
the names of all it had drowned.