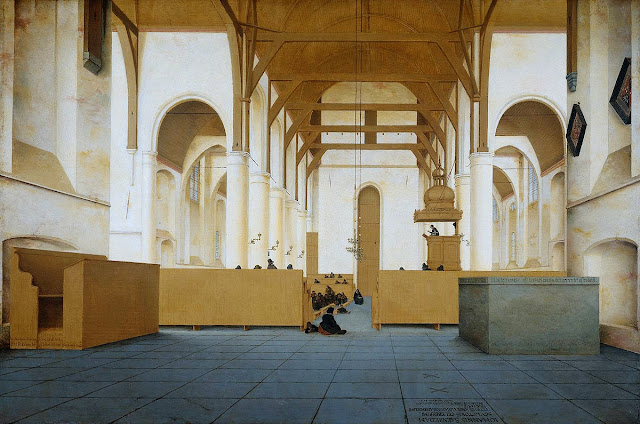 The Rijsksmuseum in Amsterdam recently completed a ten year renovation, which cost almost half a billion dollars.  The results are both spectacular and odd.  Every surface has been lovingly and resplendently restored or reinvented.  A grand, glass-enclosed entrance atrium has been added, and every painting, with the exception of Rembrandt's Night Watch has been relocated.  The museum presents a sweeping history of Dutch art, and the building itself has become one of the central attractions; it stands up to the masterpieces in the collection, but doesn't compete with them.  In some ways, however, the new organization is odd.  Works by Rembrandt appear in different rooms, instead of united, chronology is broken, decorative arts are intermingled with paintings, and older foreign works --including paintings from the Italian Renaissance-- are jammed haphazardly in a dark lower gallery.  The later decision seems woefully editorial: the Renaissance was a gloomy time compared to the golden Dutch baroque, which is the central focus of the collection. 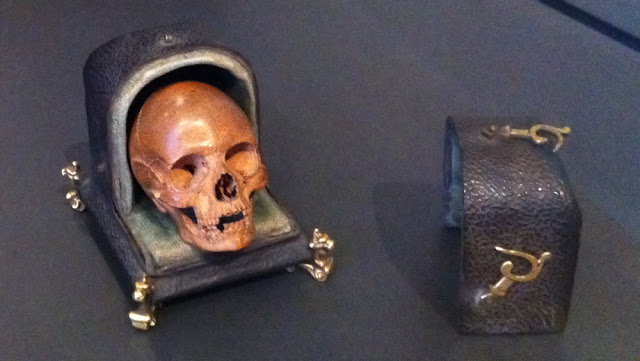 One interesting and welcome consequence of this new organization is that much of the museum now feels like a giant cabinet of curiosities.  Classic paintings are juxtaposed with curios (like the skull above), raising questions about what counts as art.  Museums, including this one, are recent inventions (the Rijksmuseum dates to the 1880s), and they often impose modern standards about what art media deserve our esteem.  The collection interrogates those standards and serves as a corrective. 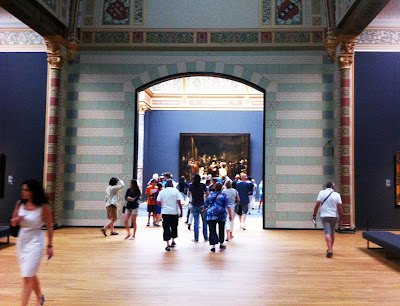 The most conventional space is the main upper gallery, which contains greatest hits by famous Dutch painters.  The Night Watch--a highly overrated work--is the centerpiece (above), which lies as the end of wide corridor a paintings, sucking in tourists who have been told by guidebooks to pay their respects.  En route, we find exceptional paintings by the usual suspects, Hals, Pieter de Hooch, and Vermeer (below).  My favorite is St. Odulphus Church by Saenredam (top), a master of interiors, which can be seen as formalist abstraction. 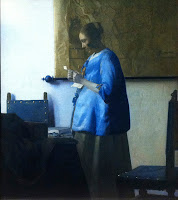 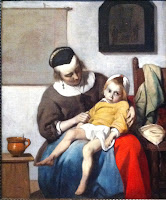 The selections for this central gallery are not always easy to understand.  It's not surprising that they included the spectacular and crowd-pleasing Vermeer, on the right, but the equally wonderful Mestu, showing a woman with a plague-ridden son (right), is quarantined to a missable outer gallery. 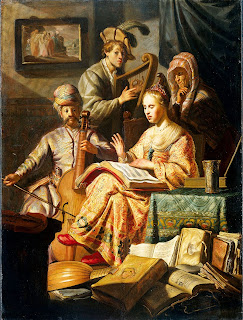 There are also some wonderful Rembrandt's in quarantine, including the fascinating early painting of musicians above.  We can see that the juvenile Rembrandt had a broader palette and an almost mannerist approach to anatomy.  One wonders why the Rembrandt collection is divided across distant rooms rather than presented together for easy comparison. 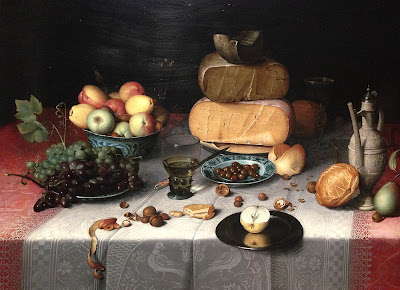 There are other odd divisions as well.  The superb still-life, above, by Floris van Dyck, is in the main central gallery, but equally wonderful still life paintings can be found in other parts of the museum, rather than treating viewers to a cohesive presentation of the genre. 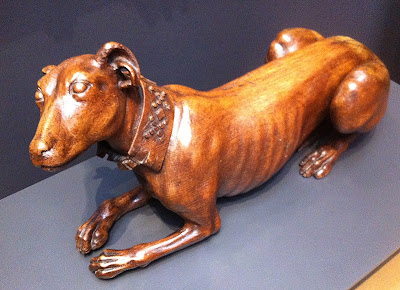 The outer galleries, as noted, are not restricted to paintings.  Mixed in, visitors will find furniture, decorative works cast in metal, and sculptures in various media, including the three wooden examples, reproduced here (a man with rats, a shrieking baby with an insect on its head, and a sporting dog).  The collection also contains some interesting polychrome sculptures, such as the handsome Baroque and Renaissance upper-body images reproduced below. 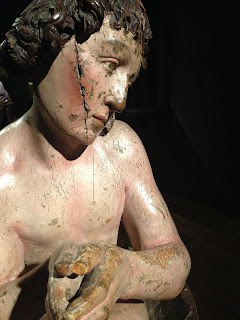 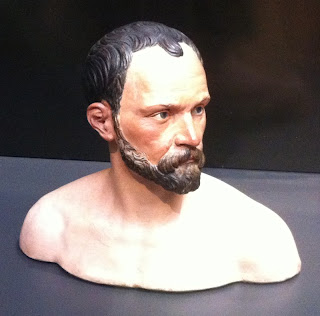 Among the more appealing oddities in the collection are two antique doll houses, with several dozen exquisitely appointed rooms.  Here is an example from each: 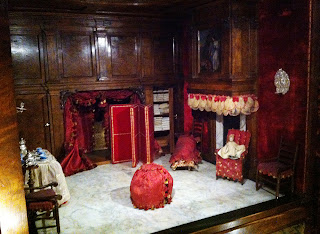 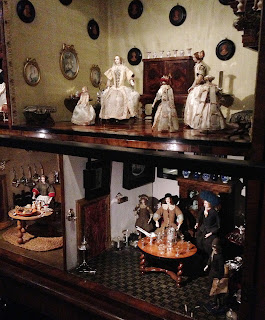 The paintings in the collection include some exciting surprises.  For me, the two unexpected highlights were a multi-panel painting by Otto van Veen and a new acquisition by Jan Mostaert.  Van Veen was a Flemish painter who influenced Rubens, but the miniature scale and gentle posture of his figures contrast with Rubens' comic-book dynamism.  Van Veen plays with the picture plane, and most panels show figures clustered at various depths.  He also contrast romance and violence.  In the first example below, we see multiple couples gently embracing, with vibrant colors and a geometric mis-en-scene.  In the second example, we see a great battle.  Notice how the slouching figures in the foreground of each panel echo each other.  The painting cycle celebrates the Batavians, an early Dutch people who made successful attacks against Rome -- they are romanticized here, without concealing the brutality of their assaults. 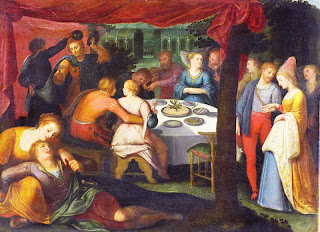 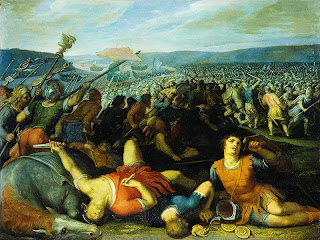 The newly acquired Mostaert painting was, perhaps, my favorite in the whole museum.  It is described as a landscape with an episdode from the conquest of North America.  Indeed, it is reputed to be the earliest fanciful painting (form the mid-16th century), depicting European interactions with indigenous people in the New World.  Unlike many subsequent works, which show friendly encounters, this picture seems to show something horrific.  A long row of naked figures prepare to encounter armed invaders, with the implication that these innocent and ill-prepared people will soon be conquered.  The impending battle is set against a magical background with rolling hills, and strange rock formations.  Paradise will soon be lost. 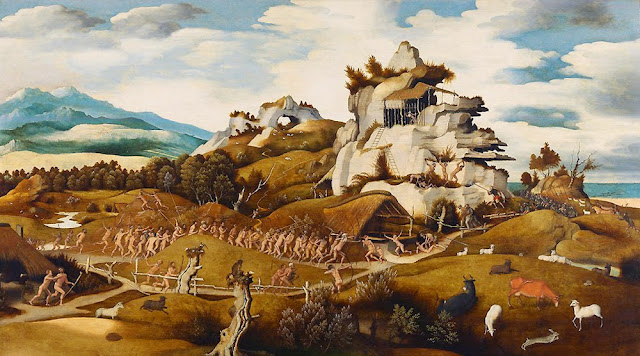 The Rijksmusem contains many other treasures.  Moving into modern times, we find a superb Van Gogh self portrait and collection of works by COBRA artist Karel Appel.  The highlights, however, are the older works.  What stuck me, and what I've tried to convey here, is that the most interesting pieces are oddities: works by anonymous artists, lesser works by famous masters, or works by second-tier artists who deserve to be better known.  Pride of place is given to familiar masterpieces, but a careful tour of the museum's many branching chambers rewards visitors with wonderful works that fall far outside the canon.  I end with one more -- a Renaissance etching by an unknown master that would make expressionists, surrealists, and other masters of modernism green with envy. 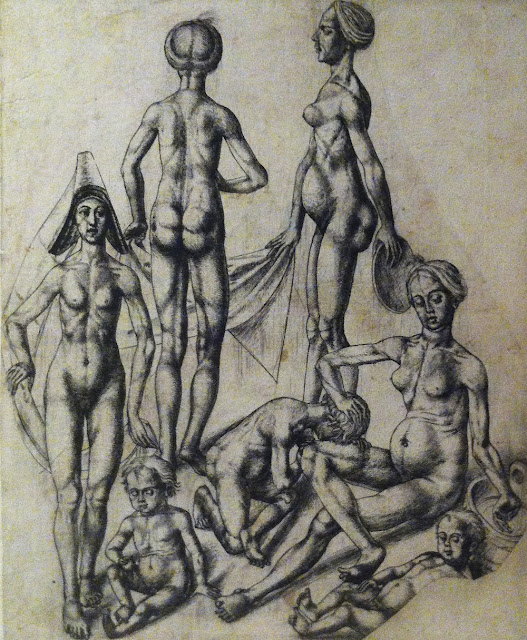