Just about 50 years ago, in December 1963, Andy Warhol ordered a large number of pine boxes from the Havlicek Woodworking Company.  These were destined to be used in the first project in his new studio, dubbed the Factory, which would be presented in his first ever sculpture show.  In the early months of 1964, Warhol and his helpers would screen print the labels of famous consumer products on each box, creating facsimiles of the originals: Campbell's tomato juice, Del Monte peach halves, Heinz ketchup, Kellogg's cornflakes, Mott's apple juice, and, of course, Brillo pads.  The Brillo boxes (there was both a yellow version and the iconic white) were the most memorable, and, with the earlier Campbell's soup lithos, count among of the most famous images in Warhol's oeuvres.  Stacked in piles at New York's Stable Gallery, these boxes would help catapult Warhol into superstardom, and Brillo would become emblematic of that ascent.

One visitor the the Gallery was a then unknown philosopher from Columbia University, named Arthur Danto.  Danto would go on to become the most noted English-language aesthetician of the second half of the 20th century.  He published his first seminal article, one of the most reprinted in all of aesthetics, in 1964, shortly after seeing the exhibition.  Called "The Artworld," Danto asks what distinguishes a work of art from an identical looking object that is not art.  His central example is, you guessed it, Warhol'd Brillo Box.  This question would hardly have come up a few years earlier when abstract expressionism dominated the New York art scene.  Expressionist painting are hard to mistake for anything but art.  But Warhol's box, like Duchamp's readymades from 50 years earlier, blur boundaries between art and artifact; they suggest that there is nothing intrinsic to every artwork that distinguishes from not art.  Art status depends on context of presentation and a background theory, which gets renegotiated as artists try to expand the boundaries of art.  For Danto, the essence of art hangs on institutionalized practices of art making and art viewing, not just on features inherent in artworks themselves.  To become art, an object must be appropriately contextualized.  The Brillo Box was needed to make that fact clear.  In Danto's eyes, it reveals the essence of art more clearly than any prior work.  It is, to that extent, the consummate work of art.  Throughout his distinguished career, Danto has come back to Brillo again and again.

After writing his original essay, Danto learned a striking fact that still hasn't made its way into every art history book--but should.  The original Brillo packaging, which Warhol's versions copy almost exactly, was designed by a fellow named James Harvey (see portrait below by Bob Schulenberg).  Harvey, it turns out, was an abstract expressionist painter, who, failing to pay his rent through fine art, had taken a job in advertising.  The Brillo logo, with its primal dynamism, stands out among Warhol's boxes because it is more visually compelling than the others.  And it is more compelling because it was designed by an artist who had highly developed skills as an action painter--exactly the kind of art that Warhol was reacting against. 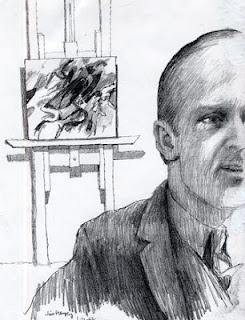 In diametric opposition to pop, action painting is about raw expression -- a angry post-war gesticulation, visceral and energetic.  It is decidedly non-representational and it takes painterliness to a level unprecedented in art history.  James (or Jim) Harvey was a paradigm case.  His canvases (see example below from here and here) are impasto explosions, about as far removed from consumer culture as you can get.  At least ostensibly.  When one compares these works to the classic waves framing the Brillo logo, a kinship can be seen.  Brillo is an explosive design.  Like the sound-effects in a Batman TV episode, the typography seems to burst off the package.  Unsubtle, unrefined, and unapologetic.  It might be described as capitalist expressionism, which shouts at the consumer rather than gently coaxing.  It is also aggressively modern, announcing a new generation cut off from classical antiquity, just as abstract expressionism had been seen as a new, distinctively American art. 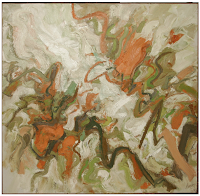 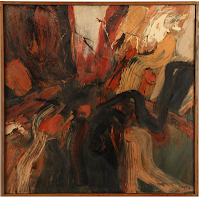 At the end of 1963, we find Warhol, having gained notoriety with Campbell's soup, searching the supermarket shelves for his next masterpiece.  Many brands grab his eye, as the ensemble at the Stable Gallery will soon attest, but there was, we can presume, a Brillo moment, when this ostentatious box demanded his reverent attention.  Warhol was searching for the fatal bullet that would finally bring abstract expressionism down, but he happened to select a work that might be better regarded as the grand culmination of that tradition. The image that would secure Warhol's coronation in the artwold was an inadvertent homage to the tradition he deposed.  Thus, through the Brillo Box, expressionism seized a quiet triumph.

Jim Harvey's work shows that the gulf between pop art and abstract expressionism has been exaggerated.  Far from usurping the expressionist empire, Warhol's work can be seen an an outgrowth. In hindsight, this continuity was already apparent from the painterly first steps of the movement.  Painterliness is an overt characteristic in Rauschenberg and Johns, and we can find traces too in early Warhol.  Consider his rhinoplasty portrait, Before and After, of 1961.  Here paint drips from otherwise carefully executed lines, just as one might expect in an expressionist canvas.  The formal composition also evokes Rothko and Gottlieb.  One might even speculate that Warhol's carefully crafted persona as an opaque celebrity short on words was a spoofy reworking of Pollack's reticent brand of cool. 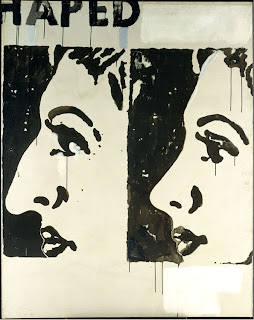 For his part, Jim Harvey did not see pop as a worthy successor.  He scoffed at Warhol's work, and his gallerist wrote an outraged press release.  According to an article in Print Magazine, Harvey chatted with Warhol at the opening of the 1964 exhibition, but he didn't mention having designed the Brillo packaging.  Some time later, he posed for a photograph holding a Brillo carton in front of one of his expressionist paintings, as if to contrast his commercial work with his "real" art.  Though the contrast is striking, there are also similarities.  It's hard not to see the Brillo swirls as echoes of Harvey's abstract work.  The photo appears below, so you can judge for yourself (source: Danto's book, The Abuse of Beauty, and a book on the Brillo Box, by Michael Golec).  Sadly, this may have been one of the last photos of Harvey.  A year after Warhol's exhibition, he died of blood cancer, presumably aware that abstract expressionism was over.

Or was it?  Inspired by Warhol's Brillo Box, Danto described art as the transfiguration of the commonplace.  Pop artists, like centuries of artists before them, turn ordinary things into extraordinary things.  They are, as Duchamp liked to say, alchemists.  Artists also transform artworks made by previous generations.  Artistic innovation is almost always an extension of previous styes or a negation.  It turns out that pop is both of these things.  In negating Harvey's brand of art, Warhol helped to extend art's expressive nature into directions that fit more naturally with the commercialization that had emerged in the wake of post-war angst.  Both action painting and commercial appropriation are outpourings of their respective ages, and the apparent gulf between those ages shrinks when we cross Harvey's colorful bridge. 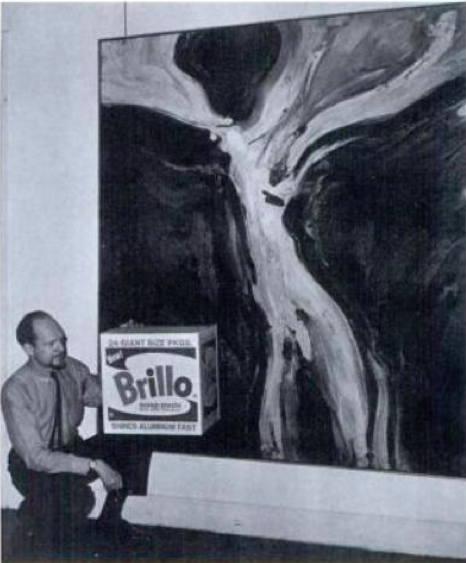