Surrealism is sometimes seen as something of an embarrassment.  Silly in a century of seriousness, illustrational during in a era that rejected representation, Freudian in ways that now seem fraught.  An exhibition currently at the Morgan Library (earlier at LACMA) seeks to correct that image.  The exhibit focusses on surrealist drawings, broadly construed to include mixed media and collage, which is a good choice, since the surrealists did much to turn drawing into a respected medium.  It draws attention to the international impact of the movement, its inclusiveness, its experimentation, and its influence on subsequent art forms.  Some of the works, like the impressive André Masson above, anticipate things happening in art right now (think of Julie Mehretu).

The exhibit includes many things that one would expect to see in a surrealist show, such as frottages by Ernst (which, admittedly, I detest), and a collection of exquisite corpses (which, admittedly, I love).  A bit more surprising is a wonderful formalist montage by Matta (below), which is more geometric than his usual work, and the monochrome format save us from his ghastly palette. 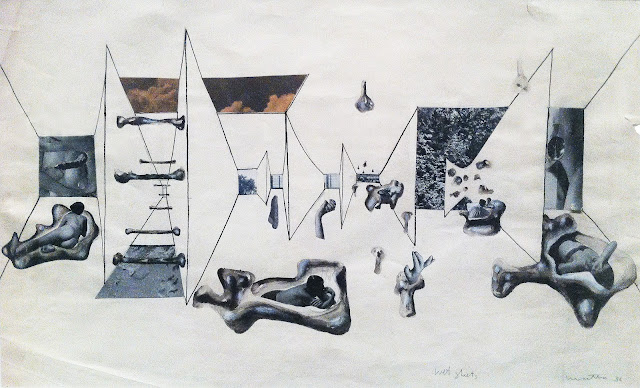 The show also makes special effort to establish that surrealism was not just a French thing, nor even French, Belgian, and Spanish.  There are collages by Joseph Cornell, a nice postcard piece by Roland Penrose, some fine works by Mexican surrealists, including César Moro, Czech artists such as, Jindřich Štyrský, and Ei-Kyu (!), from Japan.  See examples below. 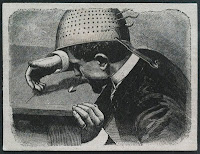 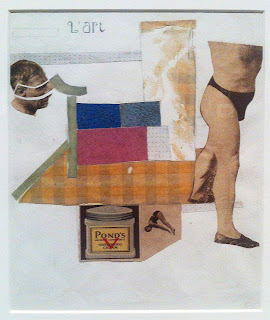 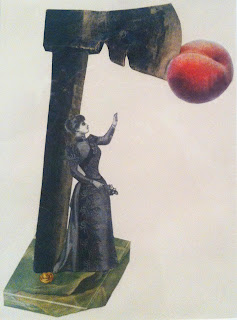 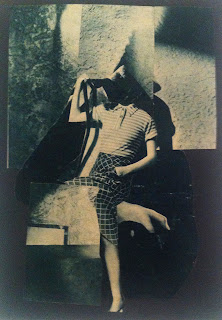 Seeing these works reminds one of surrealism's enduring influence in these countries.  Within Mexican art, there are close ties between surrealism and mural painting, in the Czech republic there is an ongoing tradition of surrealist animation, and, in Japan, phantasmagoric imagery is a mainstay of the anime-aesthetic.  Rather than seeing these international expressions as offshoots of French art, the show suggests that there was a large cross- national conversation.  That said, many of the highlights in the show are French.  I was particularly taken with the erotically charged works of Georges Hugnet.  Interestingly, these some how evoke the eroticism of Japanese cinema, and one wonders about the lines of influence. 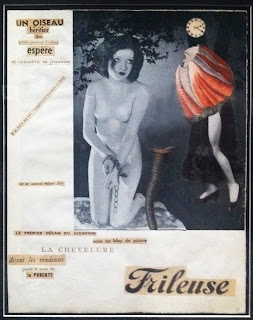 In addition to it's international emphasis, the other main editorial element of the show is the effort to demonstrate a link between surrealism and subsequent movements.  We see, for example, a mediocre Rothko, which serves a missing link between surrealist drawings and his more iconic abstractions, as well as a somewhat more successful Pollack (below). 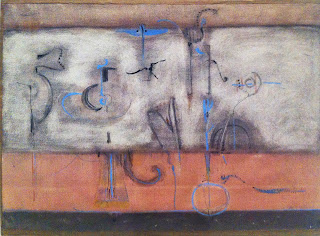 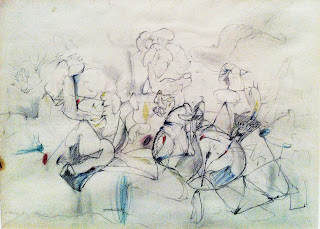 There are also some Paolozzi's, the unsung originator of pop art, which hint at the idea that pop grew out of surrealism.  This is probably a distortion, because pop iconography owes more to dada, but the juxtapositions here are suggestive (below, left). 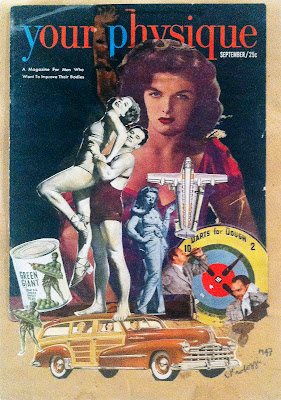 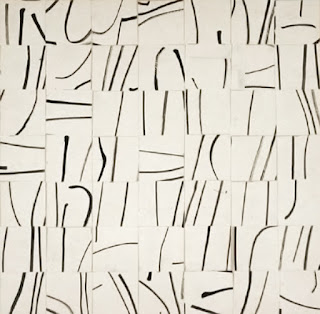 Another link is suggested between surrealist automatic drawings and subsequent experimentations with chance.  Near the end of the show, there is an appealing Ellsworth Kelly consisting of a grid of lines that have been assembled using a random method.  Dadaists like Arp, Tzara, and Duchamp may be a greater influence on this work, devoid as it is of the dream-like imagery that weighs down the surrealist enterprise.  But still, the exhibition succeeds in rescuing surrealism from the periphery and repositioning it as one of the most influential and long-lasting movements in recent art.