The World of Mickalene Thomas 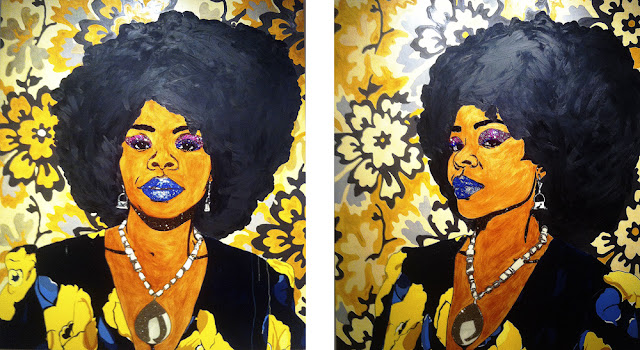 Mickalene Thomas in probably one of the best painters working today.  She has the elements that were prized in Renaissance masters: an impressive and innovative palette, a strong sense of line, a capacity to work well at both monolithic and miniature scales, a flair for portraiture, and a command over complex figural composition.   Despite these classical virtues, she is no throw back.  At least not the the 16th century.  Her aesthetic emerges from the 1970s world into which she was born.  Her muse is her own mother, who has struggled with poverty and addiction.  The "artists" who inspire her include the makers of blaxspoitation films, '70s pornographers, and anonymous neighbors who filled their living rooms with mismatched colors and patterns during that time.  Thomas' world is not Florence or Venice, but Camden, New Jersey, and Portland, Oregon.   Her art education began with the encouragement of a nurturing aunt, continued autodidactically in the aisles of a used bookstore, and ended up at Yale. 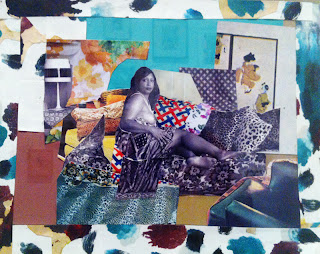 There is a major exhibit of Thomas's work closing this weekend at the Brooklyn Museum.  That is a remarkable achievement, given that her first solo show was just three years ago.  In the decade since she completed her MFA, she has produced a massive amount of outstanding work, much of which is monumental in size.  The first work of hers I saw, however, were small collages (one of which appears to the left).  The exhibit includes a wall of these--mostly women sprawled out sensuously in visually complex interiors.  This is also the theme of some of her enormous paintings (below), and throughout the show we see echoes between paintings, collage, installation, and video.  Thomas's strong aesthetic comes through in all these media, and each seems like a sketch pad for the other. 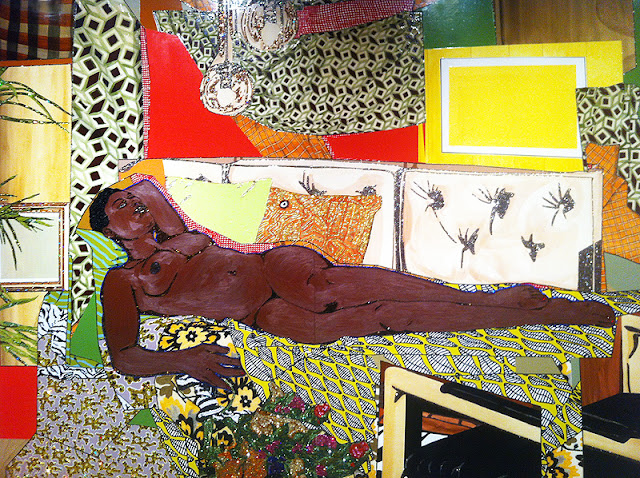 The painting evokes a long history of nudes: Titian's Venus of Urbino, Goya's maja, Ingres, and Monet.  Unlike those, the figure here does not stare back at the viewer, but seems content in her self-appointed urban paradise.  The flattened patchwork background brings to mind Vuillard, African textiles, and kimono aesthetics, but it is also distinctively and unmistakably Thomas. 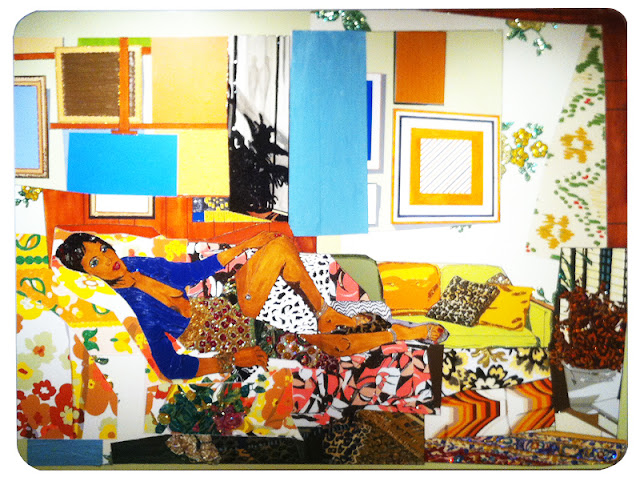 Zooming in on these extraordinary background patterns is rewarding.  Almost any random segment would work well as an abstract composition  The rectilinear forms in the example above represent paintings but also gesture at constructivism.  Thomas could remove recognizable forms from her work and remain a great painter.  Equally impressive is her preoccupation with texture: plastic beads and sequins are pasted on the canvas, and she sometimes juxtaposes flat and impasto paint.  The delicious detail on the right is from the painting above, and it shows how Thomas plays with texture with meticulous care, creativity, and wit.  Click to see up close.

Thomas is also preoccupied with space.  Almost all of her work represents interiors, and the Brooklyn show includes some paintings of furnished rooms as well as a group of installation pieces, in which Thomas reconstructs '70s living rooms replete with assaulting upholstery, wood paneled walls, and parquet floors.  Each room is detailed with period artifacts including vinyl records, family photos, and Afrocentric books.  In both the paintings and installations, the viewer can parse the space, but it is often difficult to do so.  Patterns and color disrupt the geometry.  Like a collage, Thomas present a world of cut-up fragments pasted together by a process that would look entirely random if it didn't work so well. 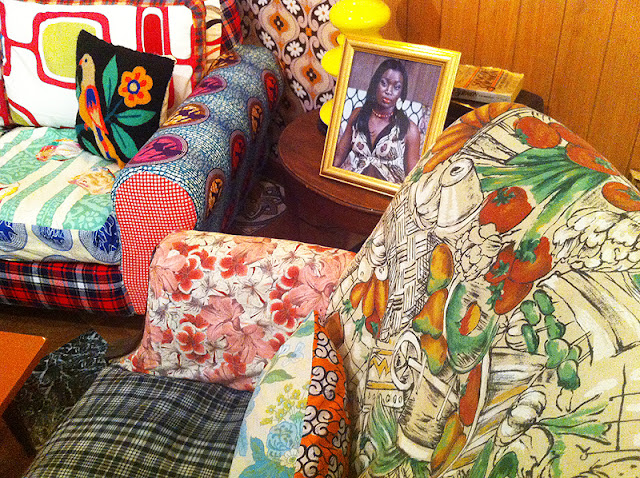 The Brooklyn show is called "Origin of the Universe." The title belongs to one Thomas's paintings (below), which is a direct homage to Courbet's "Origin of the World."  Where Courbet's painting shocked audiences, however, Thomas seems almost incidental.  Incidental because its truth is so resolutely confirmed by the paintings in the exhibition.  To produce his painting, Courbet asked a paid lover expose herself so he could profit from telling a condescending mother myth, intended to excite the male art world.  Thomas, who comes from a world of strong women, gives us a different message:  this outpouring of extraordinary work, exploding with originality, vitality, and multi-layered complexity, came from a woman, embodied, situated, and unblinkingly comfortable with physicality.  There is no myth here, and the ensuing thrill comes from the dazzling quality of the art. 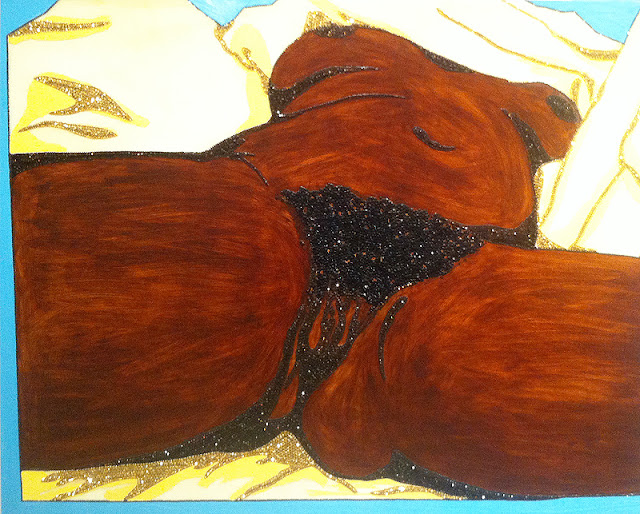