Picasso and the Anxiety of Influence

"Picasso Black and White," an exhibit closing at the Guggenheim next week, gives us a chance to examine the Spaniard's decades long career once more.  The chose of monochrome works well in the museum, and draws attention to Picasso as a painter concerned more with form than color, but it is really incidental to the interest of the show. 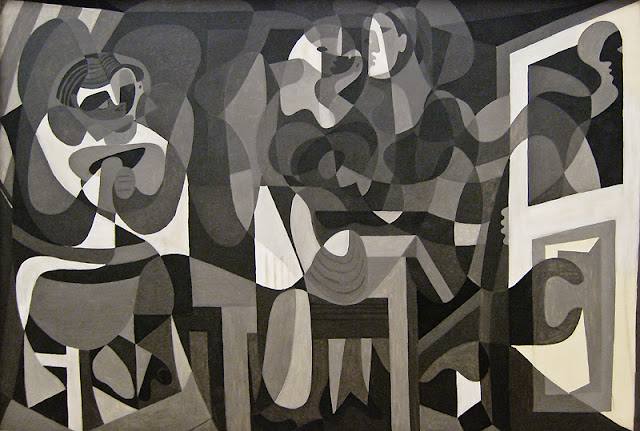 I was most gripped by the thought that Picasso achieved fame young and was under pressure to maintain a body of work worthy of his name.  We usually think of Picasso as an artist who transformed himself again and again.  That narrative is certain true for the first decade of his career, moving from blue to pink, from primitivism to cubism, from analytic to synthetic, and arriving at Neo-Classicism.  But even within these transitions, there were continuities among the discontinuties, and the decades after that, from the 1920s to the 1970s were marked by more incremental developments.  Picasso's style was recognizable throughout. 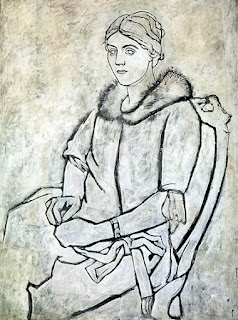 The Guggenheim show confirms that, and we see may iconic images on display: the woman ironing, two-faced portraits of lovers, studies for Guernica, and Picasso's take on Las Meninas.  Between all this, however, we some something else.  Various attempts to try out new things, and, occasionally, to try on new styles.  All of these bear the mark of the artist, but they also evoke work by others.  Picasso's influence on art is arguably unsurpassed (maybe Giotto had a greater impact), but it's important to see him as an artist of his time, learning from his "rivals."

For example, we see some portraits from just after WWI that look remarkably Viennese.  This picture of Olga (on the left) could have been a Klimpt.  The hands resemble Picasso's monolithic figures, but the elongated body and gracefully delineated features recall look more Austrian than Iberian.


Another example can be found on top.  This painting of a Milliner's Studio certainly looks like a Picasso.  It anticipates Guernica (painted 11 years later), and the interlocked diamond pattern on the right-hand side recalls earlier Picasso's Harlequin pictures.  But the forms are more curvilinear and densely packed than much of Picasso's more familiar work.  The abstractions of Francis Picabia seem to be echoed here, and the playful domestic subject matter even makes one think of Chagall. 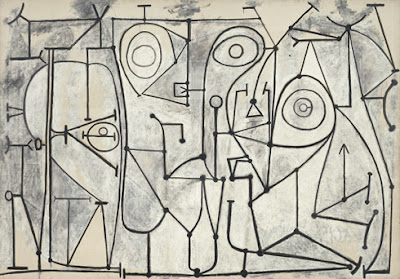 The picture above (The Kitchen, 1948) can also be read as a quotation.  When I saw it with Rachel at the show, she immediately said "Klee!"  That's surely right.  For examples Klee's Wald Hexen (forest witch) from exactly ten years earlier.  It also resembles some of the surrealists inspired by Klee, like Picasso's fellow Spaniard, Miro.  In that regard we are reminded on the link between Picasso and the abstract expressionists, who also drew on this this mode of surrealism (think of Gorky), and it's striking to recall that they are emerging in America when Picasso is painting this. 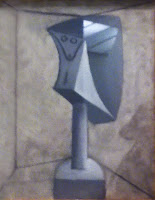 The next picture on the left is more identifiably a Picasso, but it is interesting for various reasons.  It was produced during the war years, when we think of Picasso as a political painter.  It seems to be a depiction of a sculpture--art about art.  That's pretty far removed from the themes of Guernica, and it reminds one of his Valazquez studies.  But it also looks like it might be a representation of one of his own sculptures, rather than a work by another artists.  A bit of self reference.  Duchamp made a career of this, and it is also a major theme in the work of Picasso's arch rival, Matisse.  Has Pablo tipped his hat to Henri here?  The painting also brings another comparison to mind.  The lines in the background look almost like a frame or a even a cage.  One wonders whether Francis Bacon, who was about to emerge on these scene had seen paintings like this.

As a final example (appropriately enough) consider this skull.  Skulls are a common theme in art.  There was a show dedicated to them at the Maillol museum in Paris a couple years back.  And, of course, they became highly charged as symbols in the years of the two world wars.  Picasso paints skulls from time to time (one of these is in the exhibit), and here we see a scull sculpture.  In form, it bears some kinship to the lovely skull paintings by Cezanne.  It also evokes the skulls in Aztec art.  More chillingly, one is reminded of the rounded Danziger skull used by the German military.  Picasso was living in occupied Paris at the time of its creation.  Whatever the lines of influence, Picasso's skull is a terrific, haunting, and somewhat uncharacteristic work.  It is worth far more, in my view, than the diamond encrusted publicity stunt by Damien Hirst. 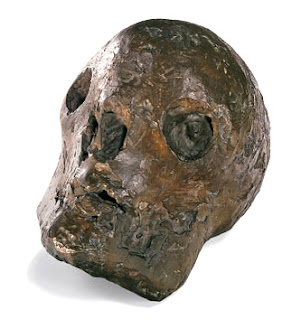