A Modern Spirit: Hilma af Klint and the Origins of Abstraction 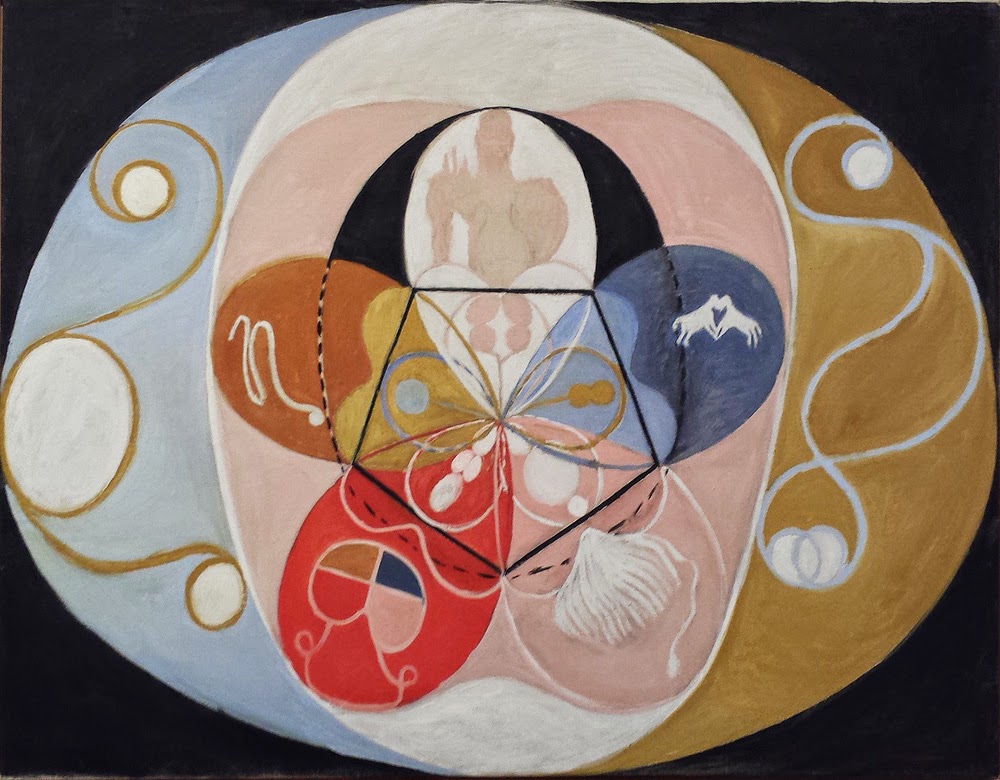 If you consult the art history books, you will probably learn that Kandinsky invented abstract painting, and that his innovation came around 1910.  Recently, the record has been corrected.  It is now recognized that Kandinsky has at least one predecessor: a Swedish clairvoyant named Hilma af Klint (pictured below).  "Clairvoyant?" you ask.  Yes; af Klint was preoccupied with spiritual pursuits and was believed, from childhood to possess mantic gifts.  Her paintings are an exercise in occult sybiology.  Though hardly devoid of meaning, many lack elements that would be recognized as representational.  They are, from a formal perspective, every bit as abstract as Kandinsky, and, I dare say, every bit as good.  Indeed, her sense of color, her bold compositions, and the ambitious scale of her canvasses, put her on a par with the giants of modernism, even if motivations were, by modern standards, backwards looking. 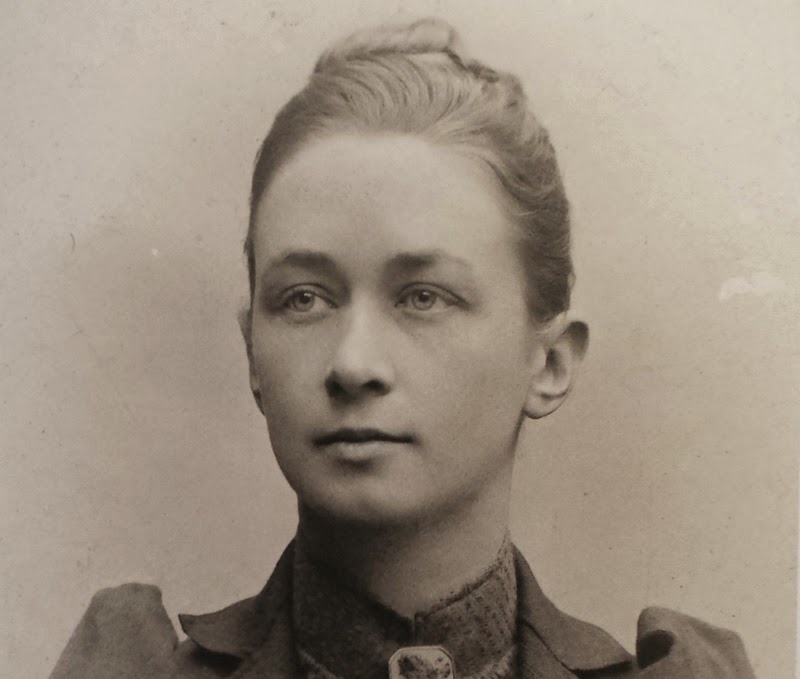 This has been a good season for unsung women in abstract art.  In Moscow, there was a recent exhibition of the Russian constructivist, Natalia Goncharova.  The Tate Modern has been hosting a small exhibition of the German Jewish minimalist sculptor, Charlotte Posenenske.  MoMA mounted a large tribute to Lygia Clark, the Brazilian op artist.  Hilma af Klint is sharing the spotlight.  An impressive retrospective, first mounted in Stockholm, has brought some of her 1,000 works into public view.  I was lucky to catch the show at Denmark's Louisiana Museum. 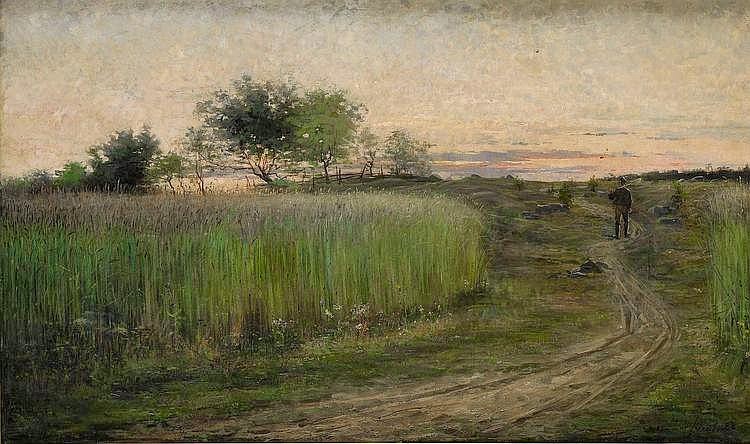 Af Klint's obscurity was not entirely the fault of a male-chauvinist art world.  Born in Sweden in 1862, af Klint was able to attend art school, a privilege denied to women elsewhere in Europe.  Throughout her life, she painted and sold conventional landscapes and nature paintings (above).  Her abstractions, however, were part of her spiritual practice.  The lovely example below is called Tree of Knowledge, a reference to her beliefs about spiritual enlightenment.  Such paintings were not intended for public viewing.  Af Klint claimed to paint in a state of higher consciousness, channeling the spirit world.  The paintings are imbued with supernatural significance, which, by her own estimation, the world was not ready to understand.  When she died in 1944, her will stipulated that her work not be exhibited for 20 years.  The work was donated to Stockholm museum that mounted the current retrospective--a gift that they politely refused.  Only recently, has the art world come to recognize her genius. 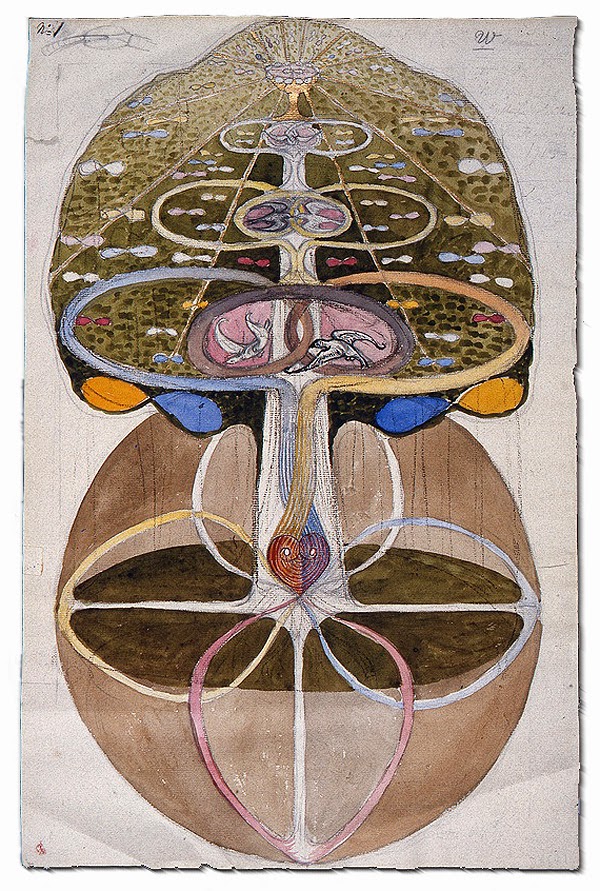 Af Klint has a life-long preoccupation with the spirit world.  In 1896, she and a group of women (called The Five) formed a group that conducted seances and studied supernatural phenomena.  A popular preoccupation at the time, they were under the influence of Helena Blavatsky, the Russian proponent of Theosophy.  Famed spiritualist, Rudolf Steiner had been secretary to the society, but, after a falling out with it's leadership, started a group of his own, under the label Antrophosophy.   Af Klint eventually learned of Steiner's work, which set the stage for a meeting in 1908.  The year before, Klint had completed a massive cycle of abstractions.   She arranged to show these to Steiner, but he summarily dismissed them, denying her capacity for higher states of consciousness.  A few years later, Steiner began to produce "blackboard paintings" (below) -- his own effort at spiritually inspired abstractions. 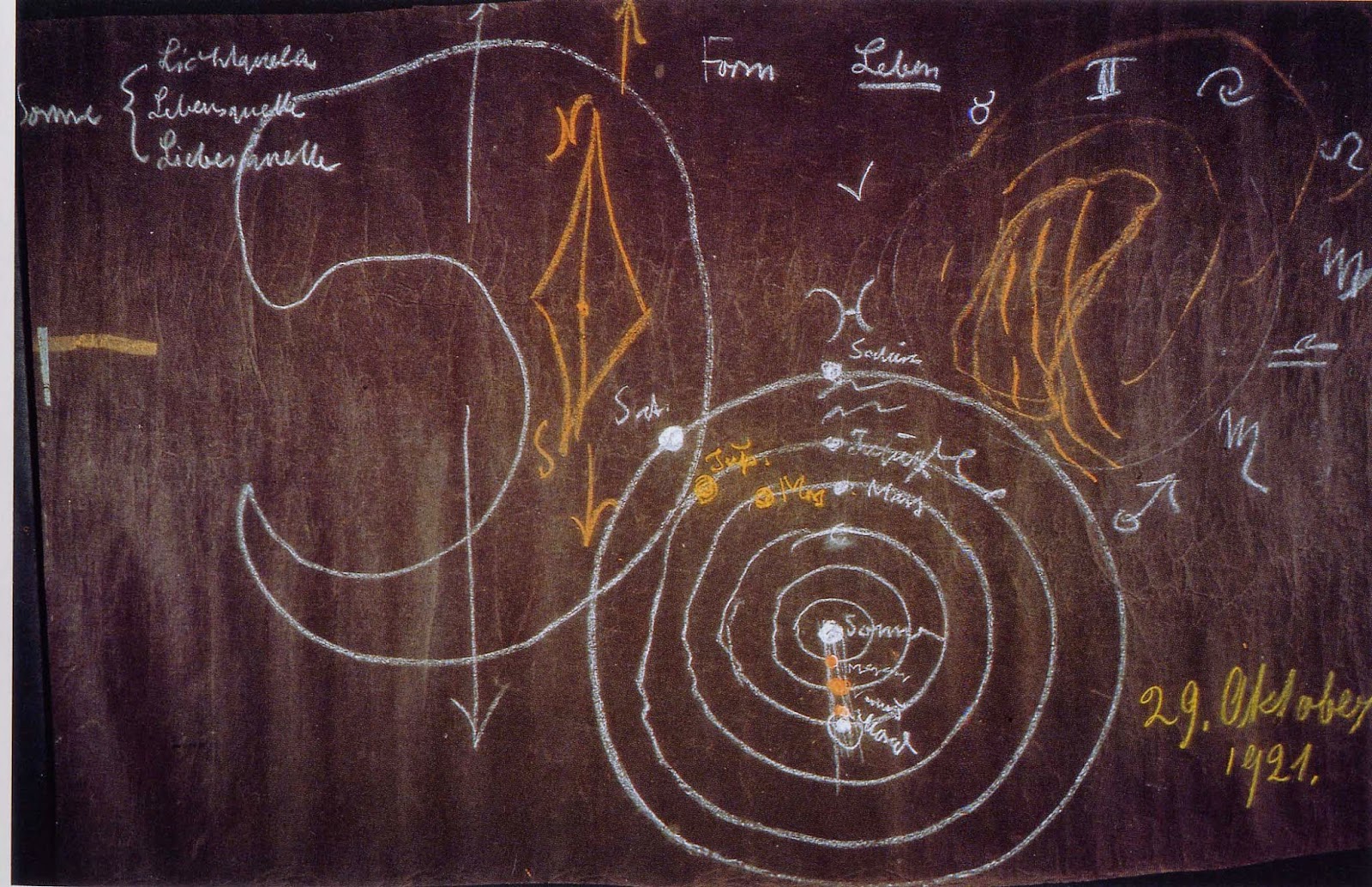 Af Klint's forrays into abstract actually began well before 1907.  As early as 1904, she was making abstract sketches and also engaging in automatic writing and automatic drawing--techniques that the surrealists would re-invent 20 years later.   Some of these early efforts are on display in the show (below). 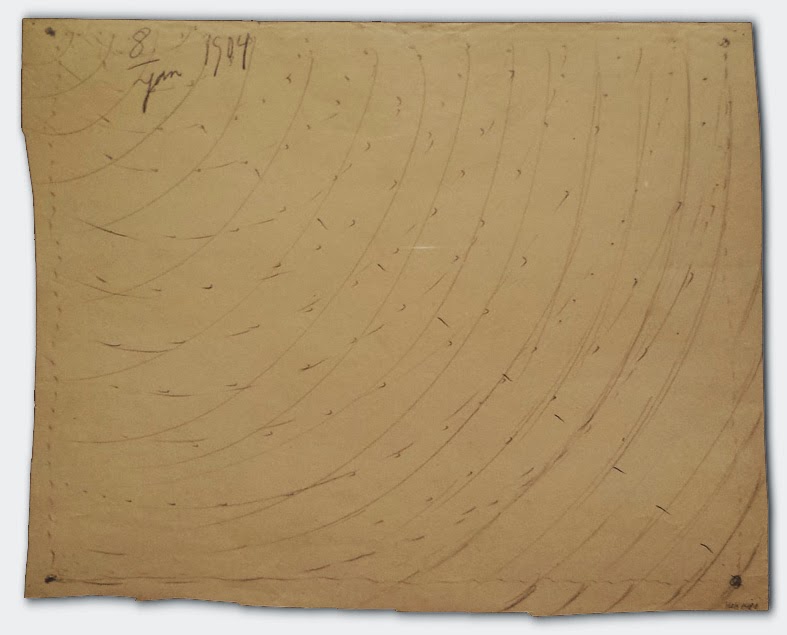 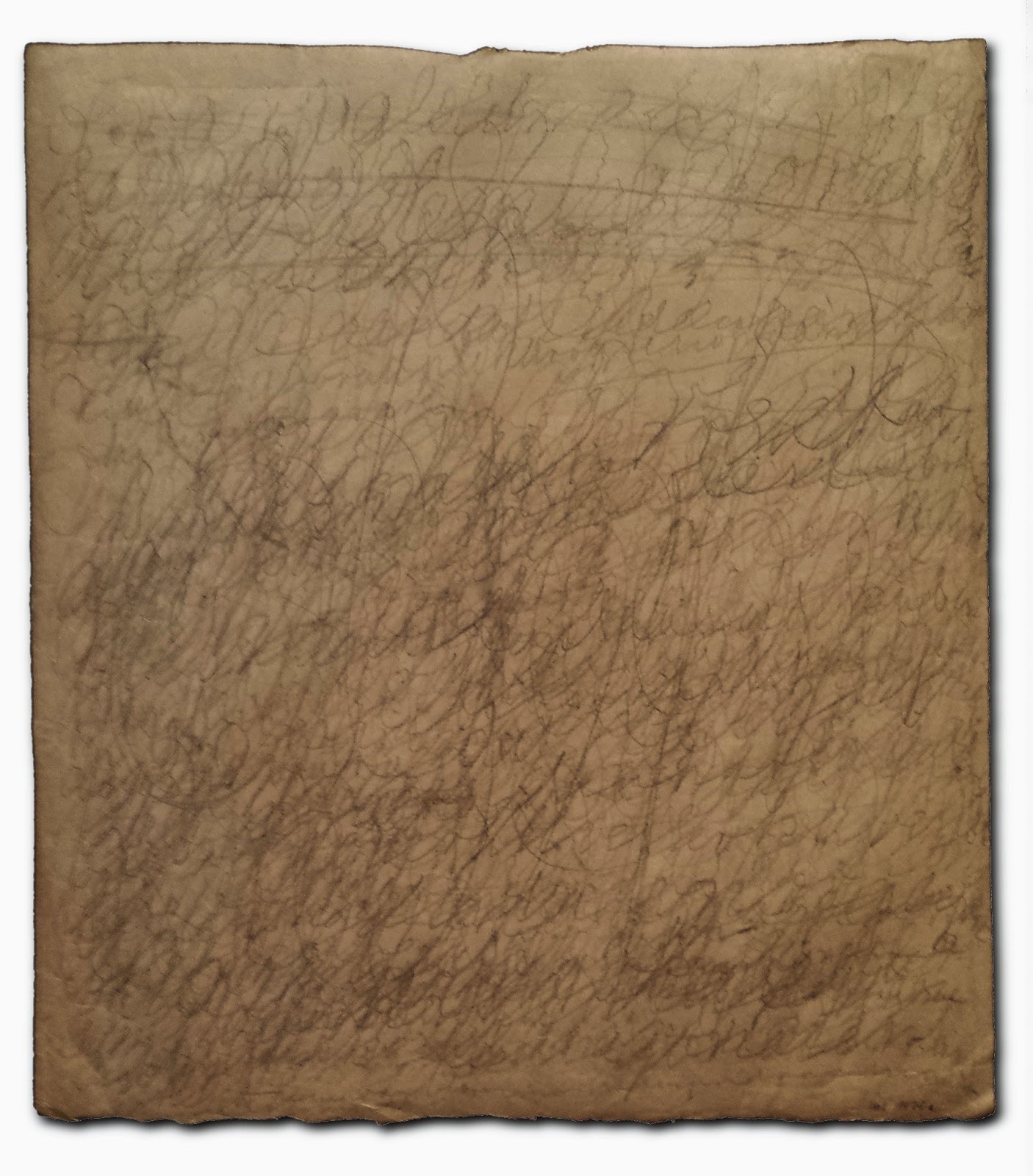 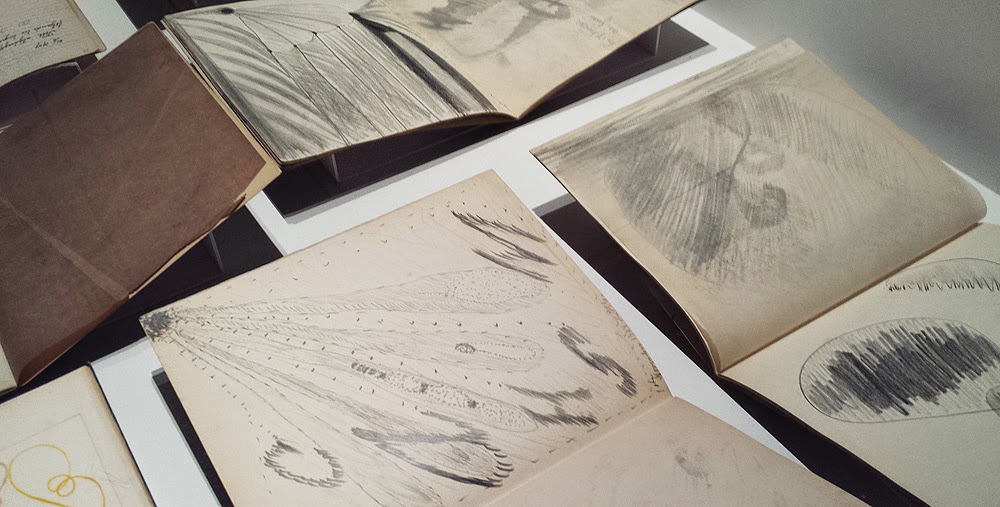 The exhibition also includes some of af Klint's notebooks.  These contain notes, automatic writing, drawings, and studies for paintings (above).   It would be thrilling to thumb through these.  The pages on display lie somewhere between the outpourings of a religious zealot and the systematic experiments of an aesthetic savant.  In either case, we see af Klint's mind at work here, and we can get a sense of how she arrived at her formidable larger works.

The first room of the exhibit sets the stage with some series of abstract drawings (above).  Though wonderful in their own right, these can hardly prepare the viewer for the monumental paintings that would soon follow. 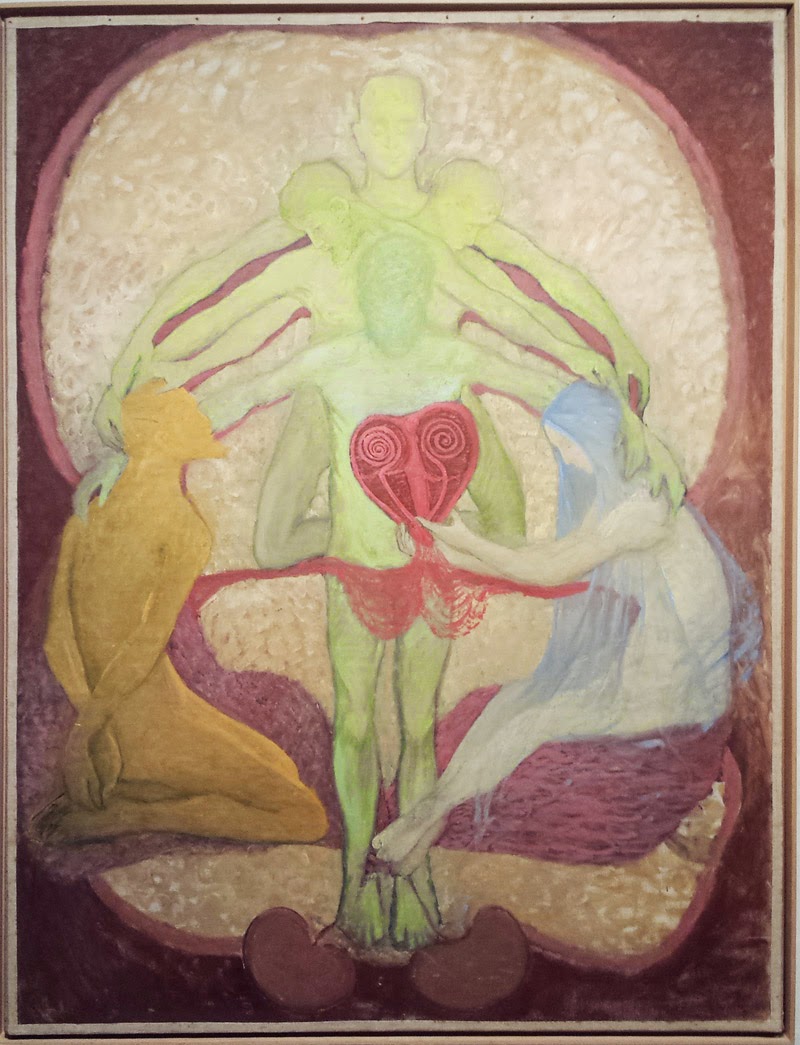 Some of these paintings are recognizably representational.  Consider the figurative example above: here a Christ-like yellow man crouched, as if bound for sacrifice across from a blue-haired maiden hoisting up an elaborate red heart.  Between them, emerge four androgynous green figures, symmetrically arranged.  This might reference the process of incarnation by which spiritual beings are given living bodies for life on the terrestrial earth.  Aesthetically, the image evokes symbolist and nouveau painters, like Ferdinand Hodler, though the super-saturated palette might fit more naturally in an exhibition of fauves. 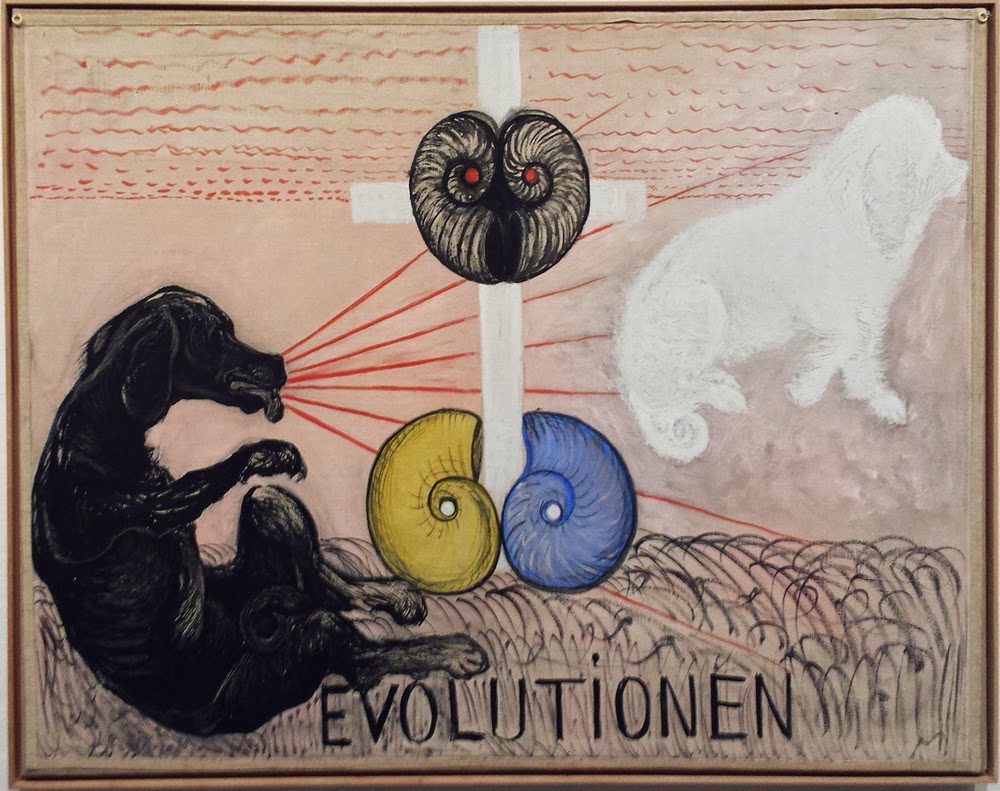 There is also a series of works which are cryptically labelled with the word Evolution (in Swedish).  Modern viewers will think of Darwin, but both Theosophists and Anthrophosophists developed evolutionary theories to rival natural selection and the idea of primitive origins.  Steiner claimed that humans evolved from a spirit world, and that early human societies lived in a dream-like state, fully aware of supernatural forces.  Over time, we evolved the capacity for abstract and logical thought, relegating dreams to nighttime slumber.  We are now en route, according to Steiner, to rediscover the hidden powers from which we have become alienated.  Af Klint's painting above depicts a black dog in some kind magical communion with its etherial white double--perhaps indicating that canines too can look forward to re-ascending into the spirit world. 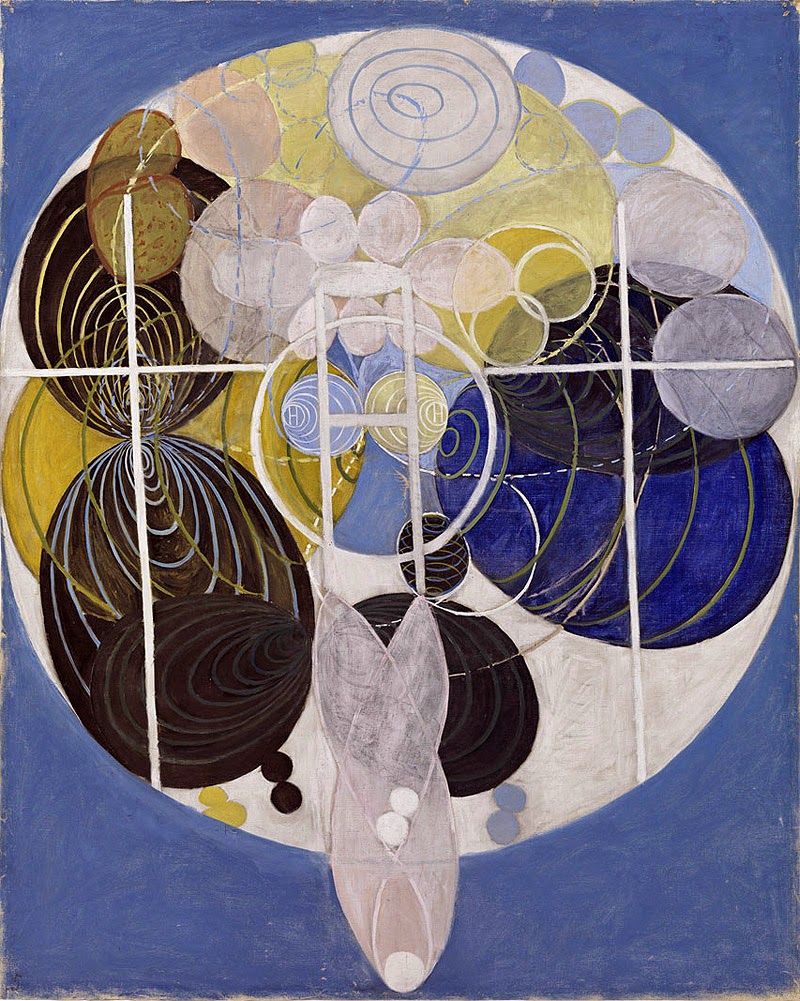 Though intriguing, these representational paintings only gesture toward the abstract elements that would dominate af Klint's spiritual works for decades to come.  The next example (above) is a jaw-dropping abstraction, which holds up to best modern masters.  A blue field is filled by concentric circles, two crosses and networks of lines, which evoke astronomical diagrams.  Perhaps it is a cosmic map.  It is known that af Klint pursued spiritual journeys to the astral plane.

The next examples (above) are twice as large; at 10 feet, they tower above viewers, creating a fanciful environment, that is at once chaotic and serene.  Painted in 1907, one wonders how these works remained hidden for half a century.  Here we can see af Klints' iconography in full glory: circles, spirals, swirls, and floral forms fill each canvas, pressing against the borders like celestial bodies awaiting a big bang.  Af Klint's palette is remarkable as well.  Cobalts and aquamarines, rusty oranges, egg yellows. 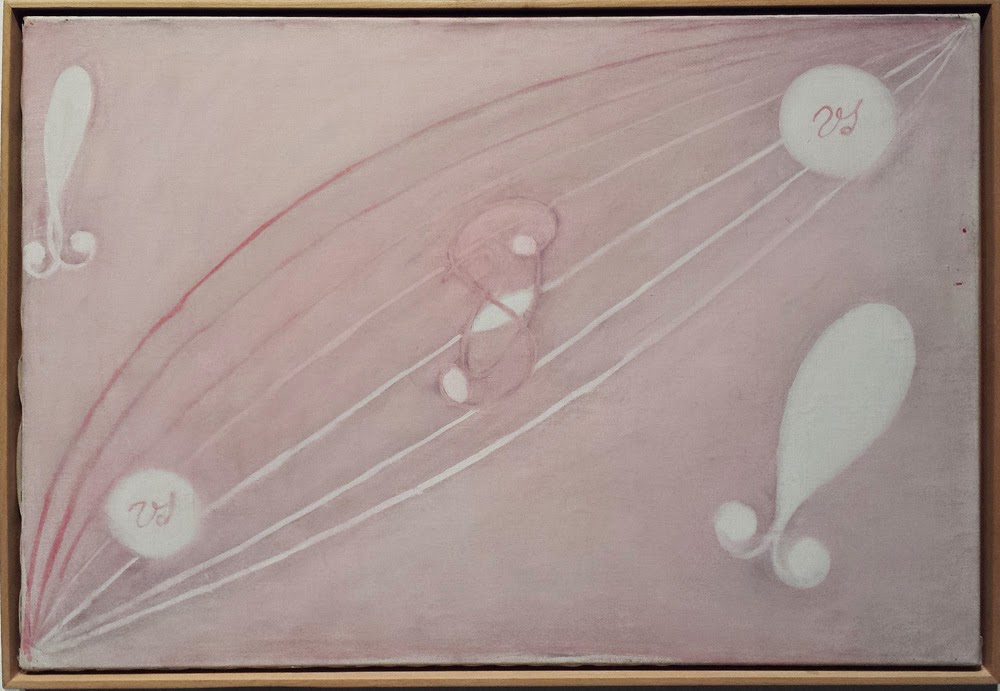 There is also a liberal use of pink (as in the example above).  This came as a welcome comparison to the museums other headline exhibition: a retrospective of Philip Guston.  Though like Guston in palette, af Klint's pink paintings have an opposite sensibility: lyrical rather than clumsy, etherial rather than earthy. 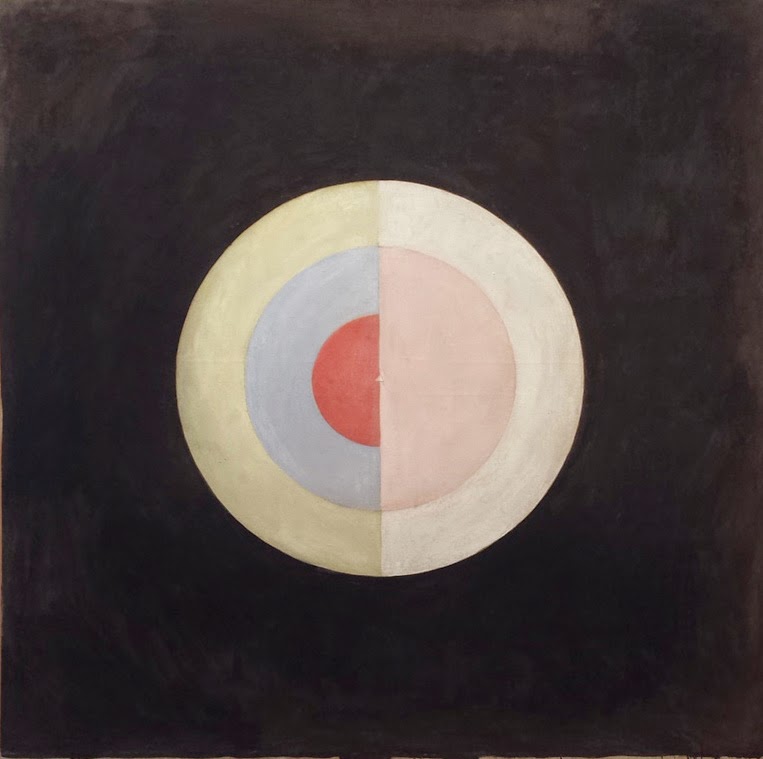 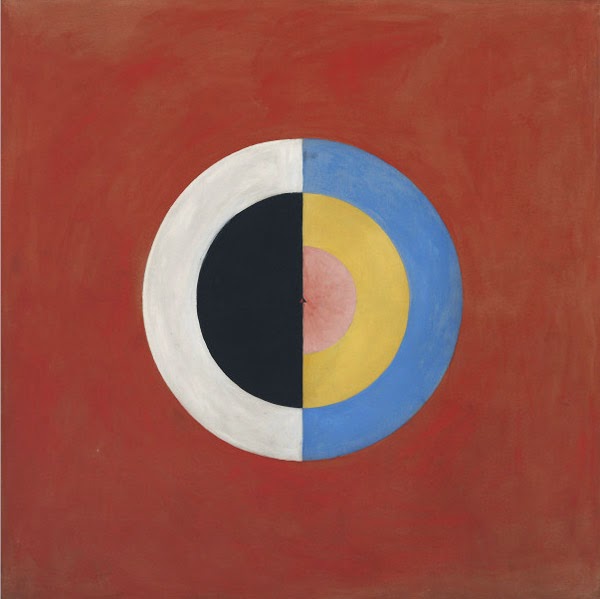 Comparisons to other later artists are often impossible to resist.  The link to Kandinsky has already been mentioned: both artists were driven to pure abstraction by their spiritual orientation.  Af Klint also portends Matisse with fields of solid color and graceful linearity.  There are also excursions into more formal abstraction, which anticipate the Russian avant garde as well as color field painters, such as Albers.  Examples of circles and squares are shown below and above.

Sometimes the parallels to other artists are almost eerie.  One of af Klint's paintings (below left) looks almost identical to a Klee painted a decade later (below right). 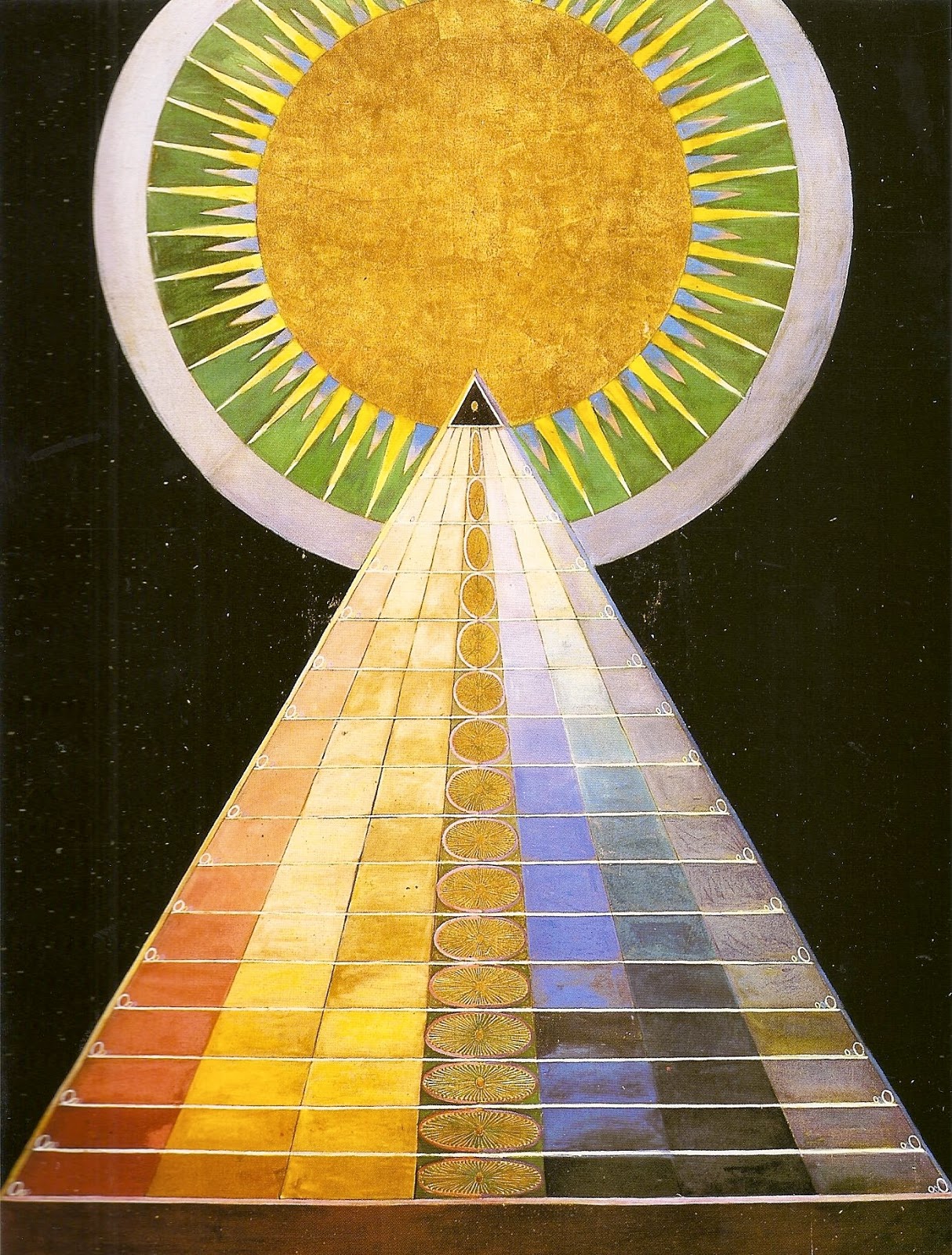 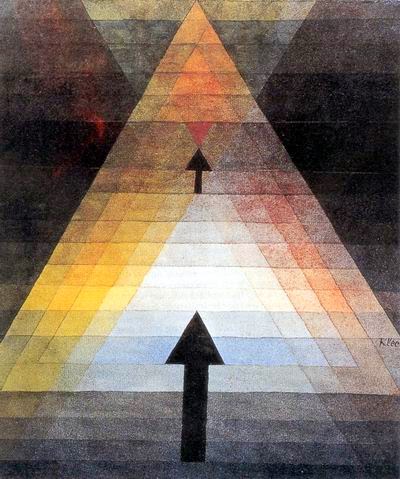 Klee also comes to mind when viewing the formal abstractions below.  These works predate the Swiss master's more geometric works.  It is as if af Klint could see where European art was going even though she herself operated in isolation from the avant garde.

In looking at this body of work, only a fraction of which is on display, we see an artist who was not only ahead of the curve with respect to abstract painting.  Af Klint also seems to have anticipated many of the most prominent movements in modern art.  In her paintings, we find parallels with the aforementioned modernists, as well as bauhaus, de stil, and minimalism -- not to mention Brion Gysin and psychedelic painters of the 1960s.  With respect to art, af Klint really does appear to be clairvoyant. 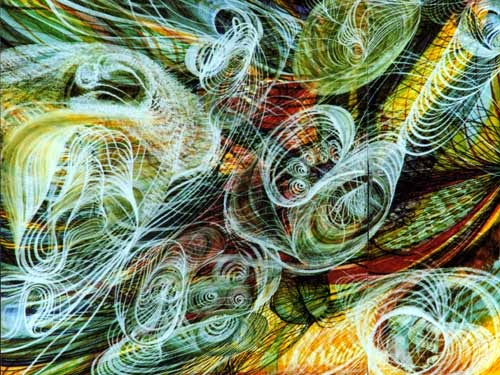 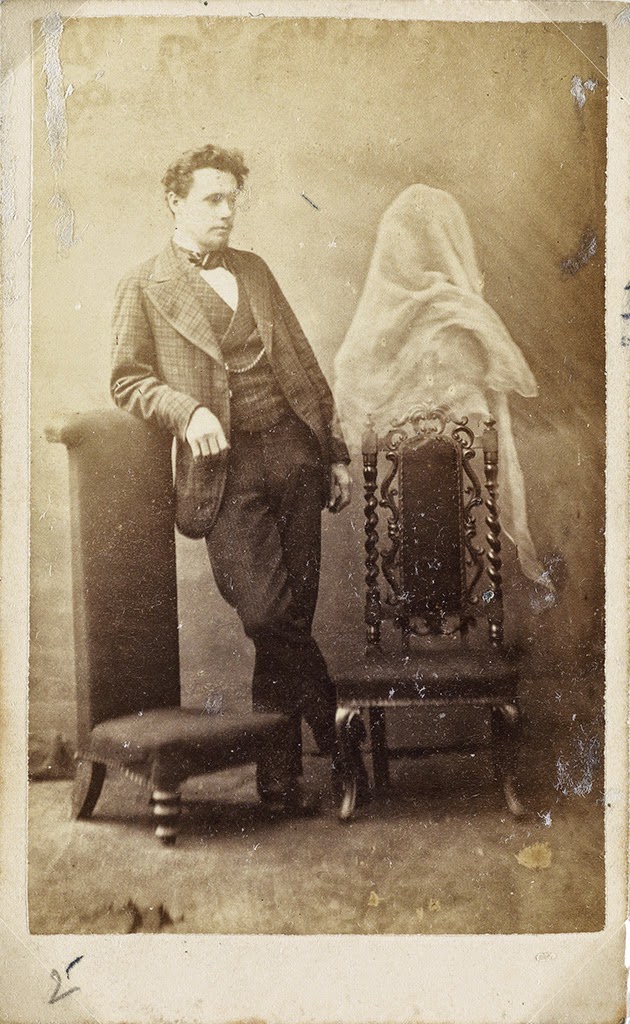 This leaves us with a final question.  While we are correcting our art history books, should we name Hilma af Klint the mother of abstract painting?  Is she, in fact, the first?  Here the answer may turn out to be negative.  In addition to centuries of decorative art, which is often abstract, there is one important predecessor to af Klint in the 19th century.  Indeed, af Klint was preceded by another spiritualist: Georgiana Houghton, who was born in the Canary Islands in 1814.  As early as the 1860s, she was running seances and producing abstract drawings that were designed to represent supernatural forces.  An example, called Glory Be to God is reproduced above.  Somewhat like a futurist painting, Houghton's image resembles the hypnogogic trailing one might experience while entering into a trance.  To the right, we can also see one of the many photos that Houghton produced, allegedly showing a ghost.   Clearly doctored, one wonders whether such Victorian occultists were all charlatans.  Helena Blavatsky was derided as a fraud and opinions divide about Rudolf Steiner.  When looking at af Klint's opus, it is hard not to believe that she was earnest in her convictions.  She seems to have recognized her own talent, and by her death in 1944, she probably understood that she had much to contribute to the world of painting.  But she held out, claiming that the world was not ready for the messages in her work.  Evidently, we are still not ready for her spiritual insights, but, with regard to her artistic innovations, it is fair to say that af Klint's time has come.