The Seoul of Modern Art

I'm just back from the capital of South Korea (aka the Republic of Korea), and I was delighted to discover that, in addition to many other charms, Seoul has become a center for current art.  There are many impressive museums there, showcasing both Korean and international artists, as well as a thriving gallery scene.  My timing could hardly have been better because a massive new museum opened its doors.  The National Museum of Modern and Contemporary Art (MMCA) is an extraordinary venue with an impressive inaugural exhibition that promises to inscribe Seoul into artworld atlas. 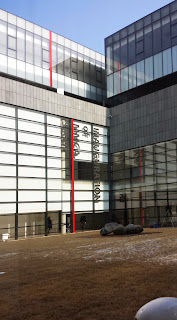 The museum in well located beside the most imposing of Seoul's impressive royal palaces (Gyeonbokgung).  The museum's entrance looks innocuous, but it gives way to a vast interior,  with duplexed ceilings and galleries the size of airplane hangers, along with some more intimate spaces.  The architecture in the usual geometric mix of glass, steel, and concrete, but there is an East Asian sensibility, as can be seen in the screen-like window treatment on the left.  A reminder that much Western architectural modernism derives from Eastern influences.

The inaugural show includes an impressive sampling of contemporary Korean artists, some of whom draw on more traditional iconography.  There was an amorphous sculpture made out of teapots, and an large abstraction that resembled traditional landscape paintings made from Lego pieces.  Another piece showed the phases of the moon, each on its own video screen.  More traditional was an oversized triptych of pink flowers (below)-- a kind of Korean pop art.  A fellow-philosopher (Edouard Machery) who accompanied me to the museum can be seen admiring a flower in full bloom.

There were also works that had a political dimension.  Especially haunting were a group of life-size statues wrapped in matching green blankets.  Like American cities, Seoul has a visible homeless population.  Many seek warmth in subway stations and underpasses, and these figures call attention to their plight. 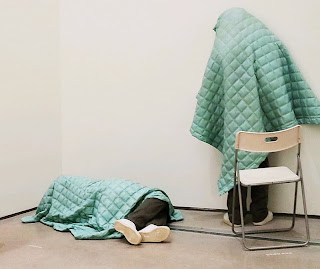 Also political was the museum's main attraction: a fabric reconstruction of a house by Do Ho Suh, one of the most interesting artists working today.  Suh has done a number of these fabric structures, often recreating homes in which he has lived.  His contribution to the inaugural show is no exception.  The exterior is a faithful reconstruction of the multi-story building he lived in when he first moved to the United States.  Contained within that there is a suspended fabric reproduction of his family's traditional Korean home.  Though large autobiographical, the work also comments on Koreans recent history.  Seoul has many Western style colonial buildings, and a history of occupation (most notoriously by Japan, but subsequently by the U.S.), so we are presented here with a visual reminder that there has been an external imposition of Western forms. 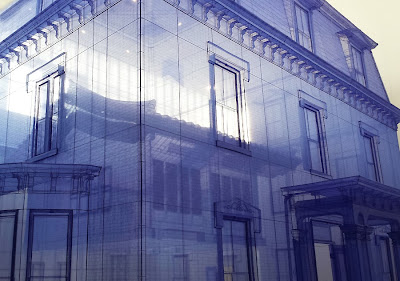 In addition to the impressive sampling of Korean art, the inaugural show contains exceptionally well selected works by international artists, from both Asia and the West.  One pleasing example in an installation by Swiss artist, Mark Lee, consisting of a network of cuboid forms, arrayed like a cityscape with projected moving images on each.  The projections are determined by a computer console, which displays a world map.  When visitors click on one of the thousands of cities there, the projections change.  Below is an East Asian city, followed by Paris (you can identify the I.M. Pei pyramid from the Louvre and the Hotel de Ville). 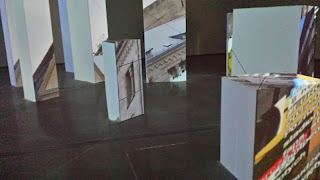 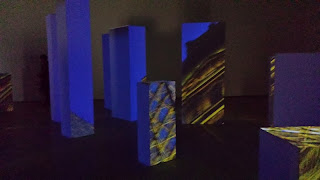 Another installation was by Indian artist, Amar Kanwar.  This one consisted of a sequence of dark rooms.  Two contained videos, and a room in the center (below) had a wall of tiny shelves containing sand and earth samples from different locations.  These cryptic displays allude to the destruction of nature.

Also rewarding was an interactive installation called Epiphyte Chamber by Canadian architect, Philip Beesley.  Suspended from the ceiling of a large dim chamber was an intricate lattice of crystal-like forms made of clear and yellow plastic.  The overall look was somewhere between organic and artificial, as if plastic could grow.  Best of all, the hanging plastic tendrils were sensitive to human motion.  They would slowly withdraw when approached, and lights would gently fade on and off as visitors moved through the work.  I felt like I had infiltrated a sleestak cave. 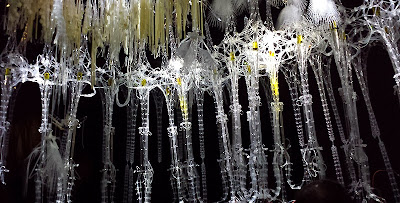 The museum also had works by Taiwanese-born artist, Lee Mingwei.  Mingwei recently gained notoriety when he created a hoax website claiming to be the first pregnant male.  With the collaboration of digital artist, he posted pictures of himself at various stages of gestation.  In the Seoul exhibition, he had two pieces that we less provocative, but more poetic.  One was a long grassy crevice containing flowers; viewers were instructed to take one and give it to a stranger in the museum.  Sadly, all the flowers had been taken on the morning of my visit.

Move moving was a performance piece that I had the great fortune of participating in.  While strolling through the museum, I was approached by a young woman who asked if she could sing a song for me. "Yes, please," was my instinctive reply.   She escorted me to a wooden chair about 30 meters away and then stood in front of me and began to sing a Franz Schubert lied.  I later learned that listening to Schubert brought solace to Mingwei while caring for his sick mother.  I have uploaded the performance and would love to learn the singer's name to express my gratitude and acknowledge her spectacular performance.


These are just a few of the memorable works on display at Seoul's new Museum of Modern and Contemporary Art.  The space is poised to become one of the most excited art centers in the world.  This addition will bring international visibility to Seoul's art scene, but it is hardly the first or only showcase for modern art in that vibrant city.  I want to end by giving brief mention to some of the other fine art establishments that I was lucky to visit there.

My first stop was the Seoul Museum of Art (or SeMA).  Unfortunately, the main exhibition there was a Scandinavian design show--unfortunate because I was more eager to see local work.  But I was rewarded by a group show of emerging Korean artists.  Among the many interesting works, I was taken by two mixed media video pieces.  One was called Equilibrium Conflict by Cheonwook Park (above). It consisted of a video showing a digital animation of a plant growing in multiple directions from a vase with many sides; hanging next to it, the actual vase was also on display, a "real" entity observing its own simulation. 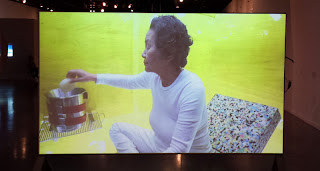 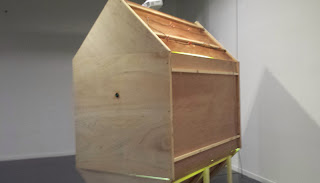 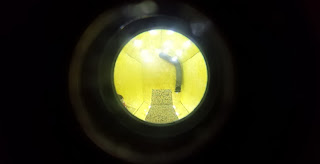 Another video piece (above), Gray Hive by Gyung Jin Shin, showed an older woman in a small yellow chamber, receiving food pellets and preparing them in a pot.  Next to the projection was a small plywood box with a viewing whole in the front.  Peering in, one discovers that the box is actually the exterior of the yellow room in which the woman in the video had been contained.

Another excellent art venue is the Ilmin Museum.  Nestled beneath a glass skyscraper the museum in a three story structure, which is used for innovative exhibitions.  On my visit, there was a show called Animism, which included video pieces, paintings, and mixed media works exploring that concept in various guises.  There were works by current artists as well as established icons, like the late Ana Mendieta, who had a great recent retrospective in London's Hayward Gallery, which I never managed to blog.  One theme in the Inmin show was Western colonialism and the tendency to portray animistic cultures as primitive and bizarre.  This was paralleled by various manifestations of animism in Western societies.  The example above comes from one of the shows many vitrines, curated by contemporary artists.  This one contains images of Franz Mesmer using the power of magnetism. 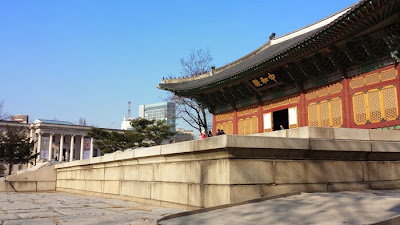 Seoul's new Museum of Modern and Contemporary art also has an older brother, in a neo-classical building which is nestled, oddly, on the grounds of the Deoksugung royal palace.  In the picture above, the museum's columns are visible in the background behind a traditional structure.  There was a fascinating show on display when I was there, tracing modern Korean artist from the 1920s to the 1970s.  The 20th century was not easy for Korea.  War, occupation, and finally a split, which has resulting in an enduring military threat.  The work on display steers clear of these political themes, but there is much evidence of Korea's increasing interaction with global community.  Most of the work displays international styles, but remains distinctively Korean.  I include several representative examples here, in roughly chronological order: a group of three working women by Park Hang-sup; a family portrait by Bae Youn-sung; a primitive landscape by Jangu Kjin; an abstraction by Jang Wook-jin; a portrait by Kim Eunho; and another abstraction by Choi Yuk-Kyung.  (Many thanks to the curator Jung-hyun Park for providing translations of these names from Korean.) 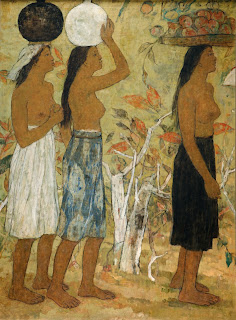 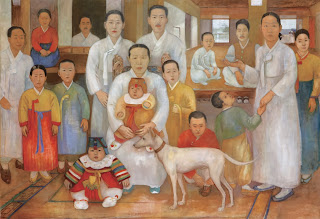 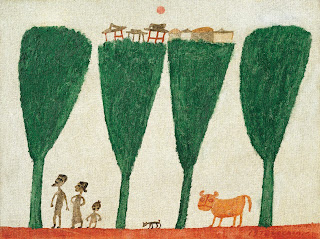 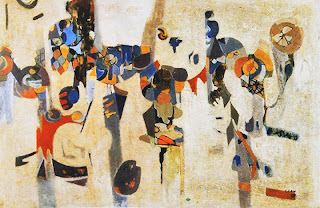 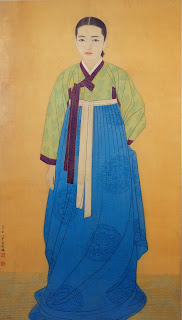 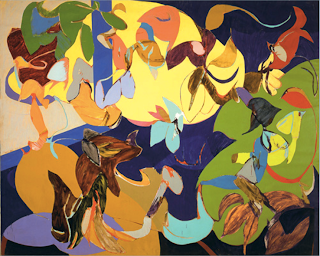 These examples testify to a long tradition of superb Korean art.  This tradition, of course, has a much longer history.  One of my last stops in Seoul was the National Museum of Korea, escorted by Korean philosophy Hyo-eun Kim.  The splendid new building, perched on a high clearing south of the city center, houses an important collection of art and artifacts, dating from prehistory to the 19th century.  To convey continuity with the contemporary scene, let me end with three items from that collection, all are from the long-lasting Joseon Dynasty.  The first image is a royal portrait;  the second a female figurine (Confucian, judging from the fruit); the next is a map; and the third, a medical diagram.  We can see here that modern art was thriving in Korea centuries before Modernism. 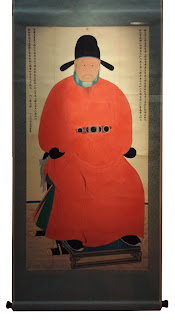 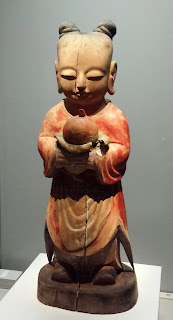 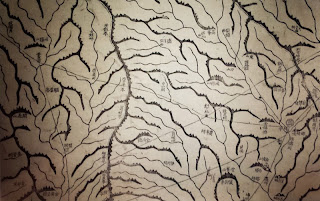 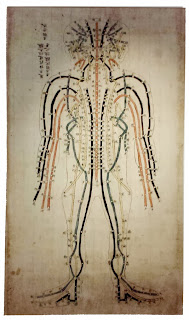