Perhaps there was something in the Baltimore air connecting that American city with Paris and with art.  It was to Baltimore that siblings Leo and Gertrude Stein came after the early death of their parents in the late 1800s and where they met Claribel and Etta Cone.  They came from similar affluent (for the Cones rich) assimilated German-Jewish families.  The young Steins eventually moved to Paris becoming known as art collectors, early patrons of Picasso.  His iconic portrait of Gertrude now hangs in the Metropolitan Museum of Art.  The Cone sisters had already begun collecting before the Steins introduced them to Picasso and, more importantly, to Matisse during their visits to Paris.  Over the years the sisters acquired three thousand works of art — among them, paintings, drawings, prints sculpture and tapestries.  Most of the collection was bequeathed to the Baltimore Museum of Art (242 went to the Weatherspoon in Greensboro N.C. where the Cone textile fortune was made).

Matisse’s relationship with Claribel and Etta was intense and enduring.  He called them, “my two Baltimore ladies”.  They were remarkable women who funded their buying from a family fortune made in supplying denim to manufacturers like Levi Strauss.  The older Claribel graduated medical school in 1890, unusual for a woman, especially of her social class.  Etta managed the family home and made her first art purchases with $300 given her to buy decorations for it.  Matisse’s ladies became major benefactors from his early struggling days when the work was considered radical to the mid 20th century when Etta died.  And he was not the only artist to attract their attention.  The collection includes works by Van Gogh, Gauguin and of course Picasso. 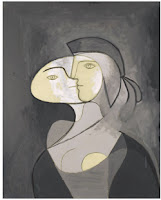 Perhaps what’s so remarkable about Picasso and Matisse is their breathtaking output.  The first was particularly prolific, as exemplified in the monumental Picasso Black and White now at New York’s Guggenheim, the 2011 traveling exhibition last seen at the Virginia Museum of Fine Arts or the stunning shows (the most recent of his final paintings) at the Gagosian.   Each of these shows included many paintings I had never seen, in part because they are from private collections.  The Cone sisters bought 500 Matisse works — the largest single collection in existence — but only a fraction of his total output.

Clara and Etta Cone were above all collectors.   They weren’t buying art as an investment but as treasured objects with whom they could share their habitat.  The walls of their adjoining Baltimore apartments were covered floor to ceiling.  Back in August, I wrote about an exhibition at Duke’s Nasher Museum devoted to the early collecting of Jason Rubell.  Now the Nasher has mounted an exhibition of the works selected from of the Cone Collection that were previously seen at the Jewish Museum in NY and in Vancouver.  The Rubell show is still up and together these two represent a kind of homage to collecting.  For Collecting Matisse and Modern Masters The Cone Sisters of Baltimore, the large Nasher exhibition space has been beautifully divided up into smaller intimate “rooms” to reflect more closely how the Cone sisters and their guests experienced the art.

The Masters are wonderfully represented by a Van Gogh landscape, one of those that include a human figure and by Gauguin’s Woman with Mango from his Tahitian period. 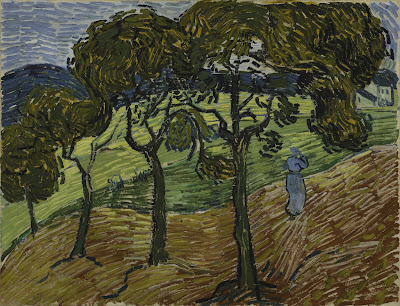 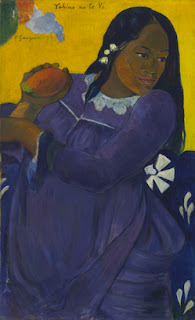 While much of the space is given over to paintings, sculptures and works on paper, there is a charming and playful self portrait Picasso sketch calling card with the inscription: “Bon jour Mlle Cone”. 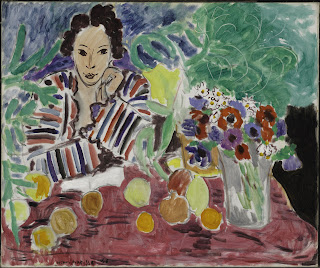 On to Matisse:  The artist’s vivid colors and brush strokes are well represented by his Striped Robe, Fruit, and Anemones.  The image focuses on the female figure in pensive pose perhaps contemplating the vase of flowers set on a bright tablecloth strewn with fruits including the ubiquitous lemons found in many of the artist’s works. 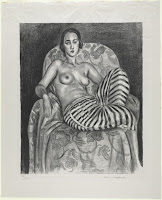 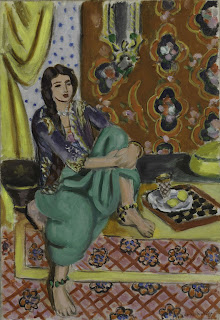 Like Picasso, Matisse’s work spans decades and a wide range of styles culminating in the cut outs of his later life created after the Cone sisters had both died.  Both men had a special interest in the female figure. Picasso’s are often distorted, but not so with Matisse whose women, even when reduced to stylized painted images or line drawings are always recognizable.  The black and white Odalisque crayon drawing shows a woman with an almost Modigliani-like elongated face sitting comfortably in an armchair.  Her striped pants remind you of the lady’s robe in the first painting.

Matisse spent only a short time in North Africa, but a group of paintings inspired by the visit are among his most striking.  They are represented here (above) by another female figure, this time opulently clothed sitting to the left of an ornate scene including a tray containing a plate of lemons.

Perhaps one of the most striking works in the show is the much more stylized reclining nude, often referred to as The Pink Nude, painted in 1935.  Matisse did a series of preparatory pieces for this large (66 x 92 cm) canvas, which Etta couldn’t resist.  Central to the composition is the flesh colored figure set against a grid pattern that in the final state looks like blue tile with white grout.  That tile pattern is repeated on the back wall (white with green this time).  Above her is an abstracted object that in his early states was a vase with flowers.  But nothing is more important than the woman herself.  She dominates both the space and our attention.  It is the exhibit at it’s best. 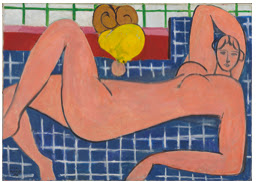 The images from the exhibition were kindly provided by the Nasher Museum of Art at Duke University. The works are owned by The Baltimore Museum of Art.